In recent years, reports of so-called “click farms” or “follower factories” have pushed the phenomenon of “fake” likes, followers, and views to the center of mainstream social media debates (Clark 2015, Confessore et al. 2018). As politicians have been purchasing Twitter followers, and with the more recent rise of so-called social media influencers on Instagram (Khamis, et al. 2017), it has become evident that social media is increasingly compromised and publics are taking shape in new ways.

The range of “fake” engagements – what those involved in the market term “social media marketing services” or “SMM services”– has been expanding and developing in the context of an arms race between corporate social media platforms and their detection devices and the wide range of dispersed actors involved in producing and distributing SMM services. While discussions about the fake follower market tend to be centered on distinctions between “fake” and “real”, or what Instagram terms “authentic” and “inauthentic” practices, much less is known about how authenticity is a technical and methodological construct in relation to platform detection and security mechanisms.

This project focuses on Instagram followers, which are at the center of the market for artificial engagement on social media, particularly in light of the rise of influencers, microcelebrity, and Instafame, the latter defined by the number of followers an account has (Marwick 2015). In this process, the project aims to move beyond dichotomies between “fake” and “real” followers and instead gain insight into what constitutes a “good enough follower”, one that remains active and connected to the purchasing account in the ambivalent space between what Instagram terms “authentic” and “inauthentic” practices.

More specifically, the project investigates different kinds of Instagram followers available for purchase, comparing costs, speed of delivery, and different dimensions of quality. In this process, we have developed methods and recipes to create Instagram accounts and populate them with followers purchased on the SMM market in order to map, explore, and visualize relationships between them. This allows us to consider more carefully the ongoing arms race between Instagram’s security detection algorithms and Instagram follower providers.

We collected data before and after buying followers for dedicated research accounts on Instagram. Therefore, it was possible to observe the increase of followers and inspect those newly gained followers for different properties, like followers-count, following-count, media-count, or profile information.

In different moments in between the captured timeframe, another dataset for each account was captured. This contains the followers of the bought followers, scraped for media-count, followers-count, following-count, and profile information.

Clearly state your research questions and any hypotheses/expectations.

The project began with participants creating 15 Instagram accounts for use in the project. After registering and transferring funds to a key seller of social media engagement services, justanotherpanel.com, we conducted an inventory of the around 100 different types of Instagram followers available. We decided to order 100 followers from 15 different services divided into three different categories based on website descriptions. These centered on quality, with terms such as ’real & engaging’, ‘super VIP’, ‘100% real’; nationality--Iranian, Indonesian, Brazilian, Spanish, Russian--and temporality, using terms such as ’prank’, ‘high drop %’, ‘fast finish’, ‘non-drop’. There was some overlap between these categories.

We used two different methods for collecting data from Instagram. One script we used is based on Instaloader, to load followers, following, number of posts, profile image.

We also used the commercial tool Phantombuster, ‘a toolbox to extract data (and) automate actions.’ Phantombuster offers suggestions for how their tools should be used as there are no clear guidelines concerning how much data one can extract without being blocked by Instagram. In this process, it is important to reflect upon how Phantombuster is in fact part of Instagram’s app ecology and that we as researchers are using a commercial tool to access data on Instagram’s platform. This is an uneasy relationship, to say the least. In fact, when using Phantombuster we faced ongoing problems in using the tool and retrieving data, which Phantombuster’s customer service claimed was due to their own server problems.

In other words, conducting research on Instagram has in many ways become increasingly complicated and demands new forms of experimental methodologies, sometimes in relationship with private for-profit actors such as Phantombuster.

We collected a number of recipes for research on followers on this webpage: 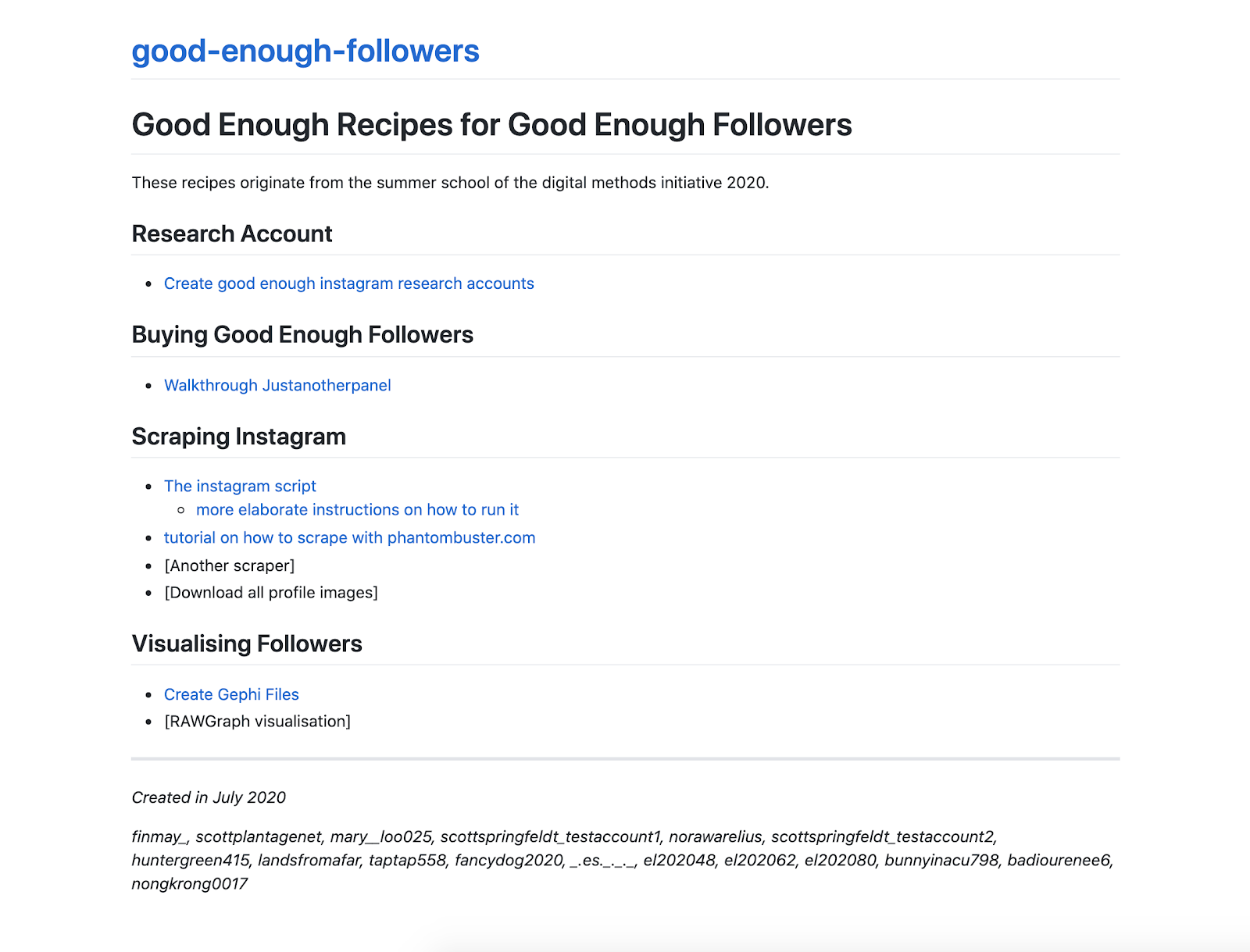 We used RAWGraph, Image Sorter, and Gephi to visualize the collected data.

The graph shows the increase in followers after they have been bought at 18:00. Depending on the bought “quality”, it shows that some followers are getting delivered more quickly than others.

Some categories seem to “over-deliver”. Furthermore, this graph illustrates how some followers disappear after a short period of time.

Plots show the qualitative properties of the bought followers, displaying their followers, following-count and media-count. The color indicates the bought category and if accounts are public or private. 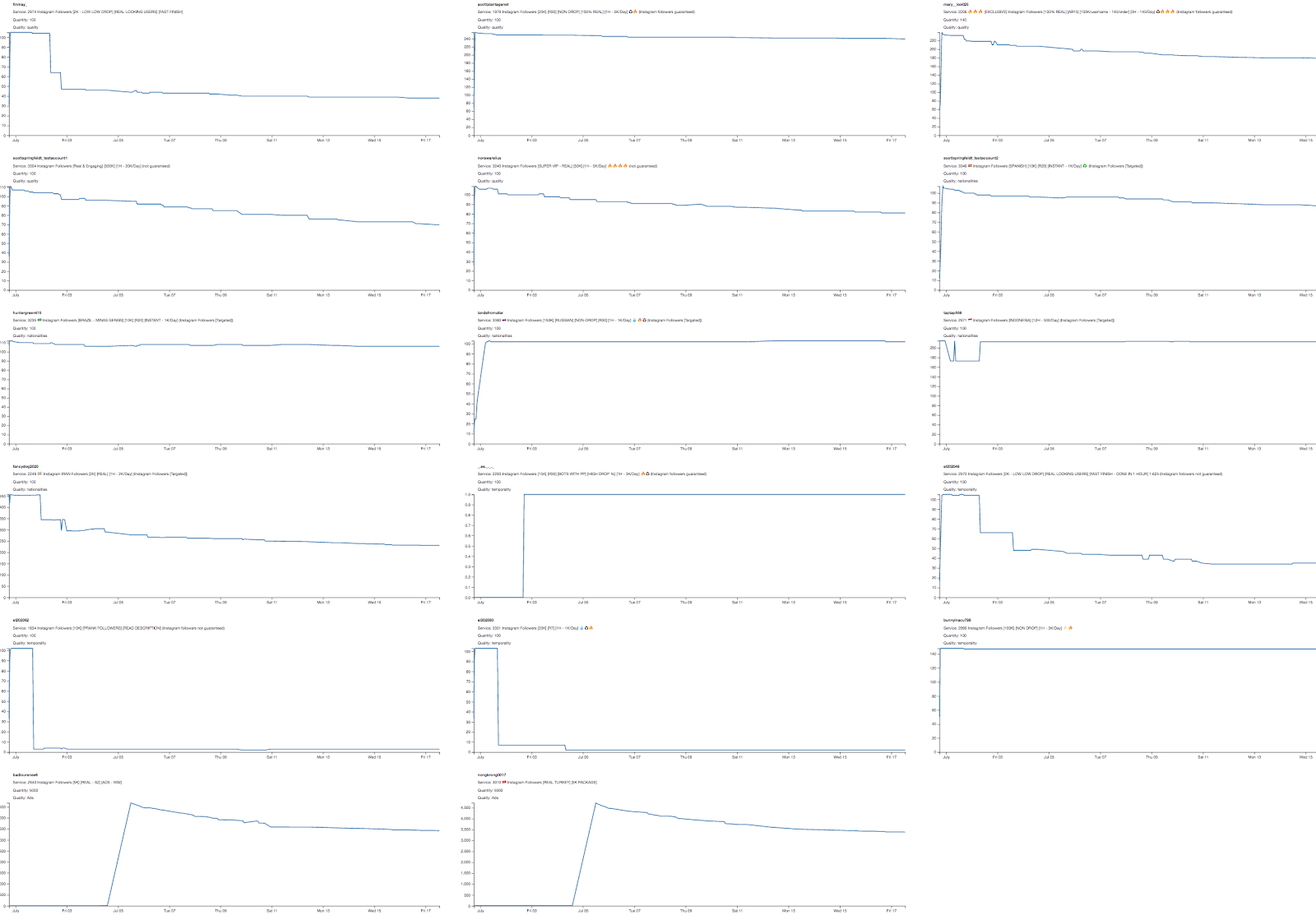 The graphs show how persistent the followers over time. In terms of their persistence over time we can identify different qualities where some batches of bought followers stop following or are deleted soon after the purchase whereas others steadily decline over time.

While it is not possible to conclude about the relations between the different services bought, it is clear that the services themselves differ in their quality. There are multiple factors in which the followers show differences in their characteristics: Followers of the followers, media count, lifespan of the follower.

To understand the logic of ‘low quality’ follower accounts that disappeared within several hours after they were purchased, we developed a technique pertaining to the ephemerality of Instagram following-follower ecology using one of such accounts. The account dimamyfy_56639248_beta was one of the last remaining accounts among the followers purchased for el202080 – one of our research accounts – using justanotherpanel.com module 3351 Instagram Followers [20K] [R7] [1H - 1K/Day] 💧♻🔥. 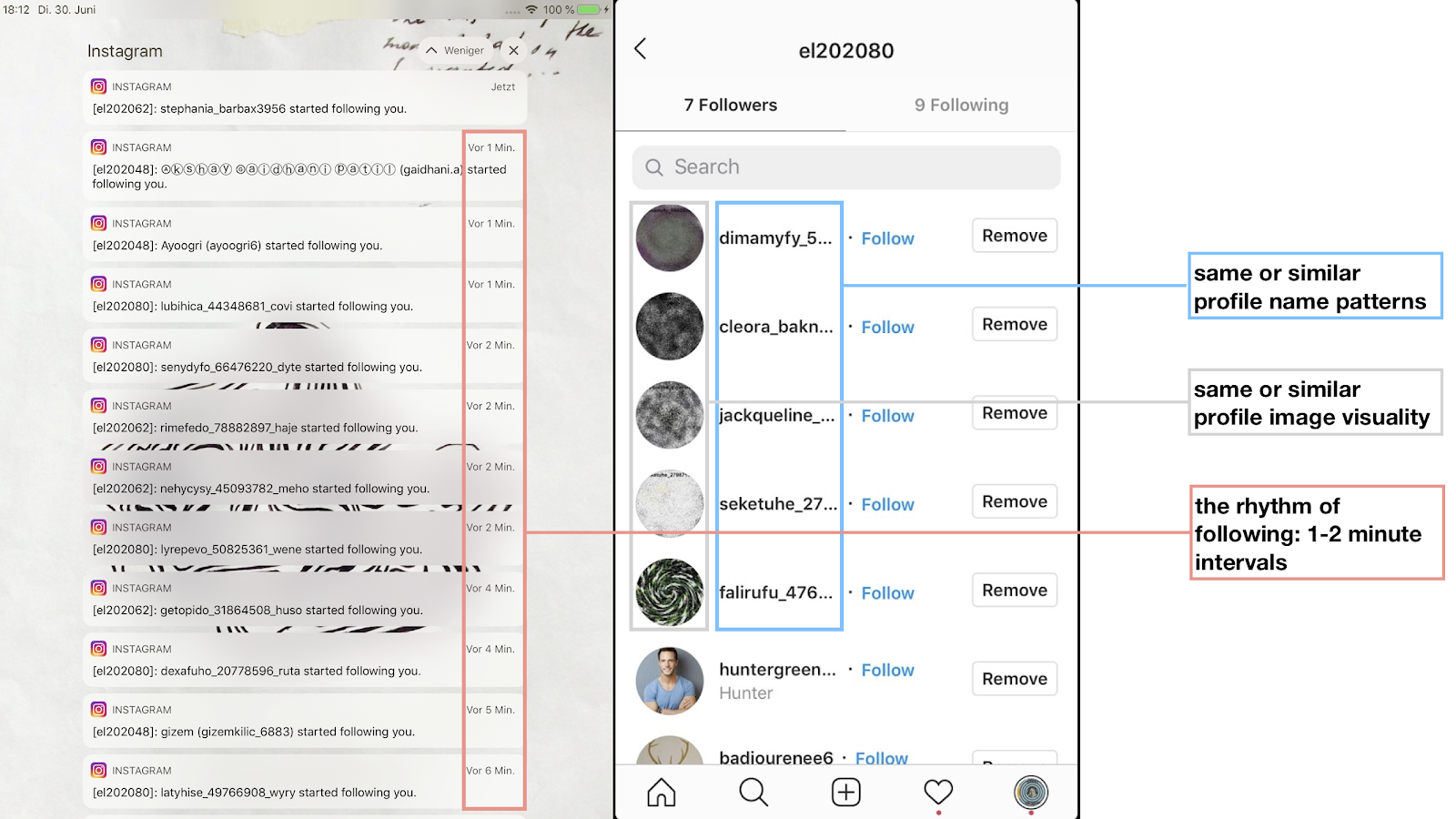 The specific qualities of these ephemeral followers documented in the screenshots include (1) the rhythm of following in 1-minute intervals, (2) similar profile image visuality featuring abstract or ‘cosmic’ color patterns, and (3) similar profile name patterns featuring random combinations of names, underscores and numbers. Another (and probably most important) quality of these accounts is that they quickly disappear. 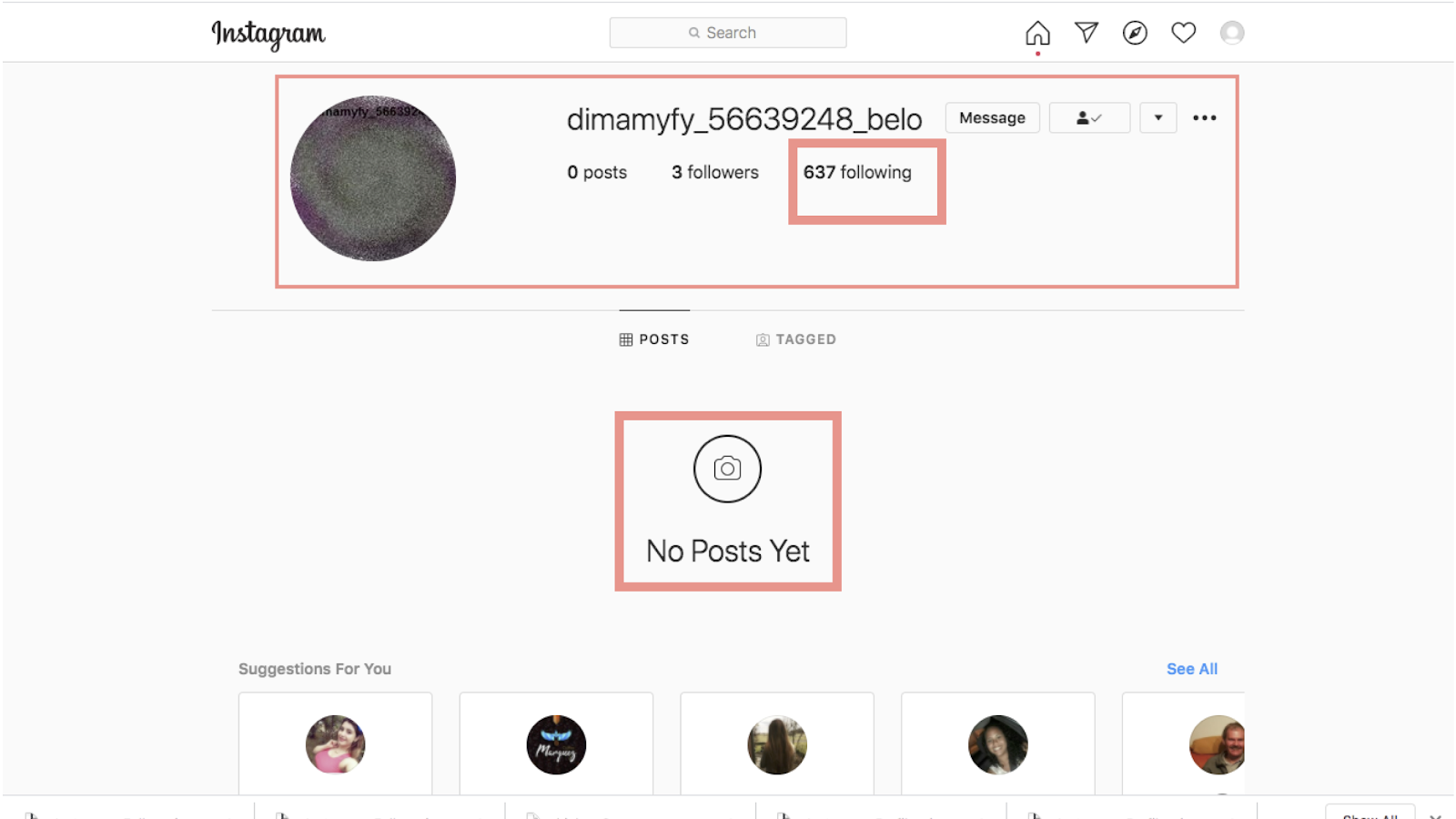 Considering that low-quality followers such as dimamyfy_56639248_beta come in packages that quickly disappear, we asked:

How do we arrive at the initial ecology of dimamyfy_56639248_beta co-followers (other accounts like those that we purchased and that were no longer there) by repurposing the logic of following and being followed on Instagram? 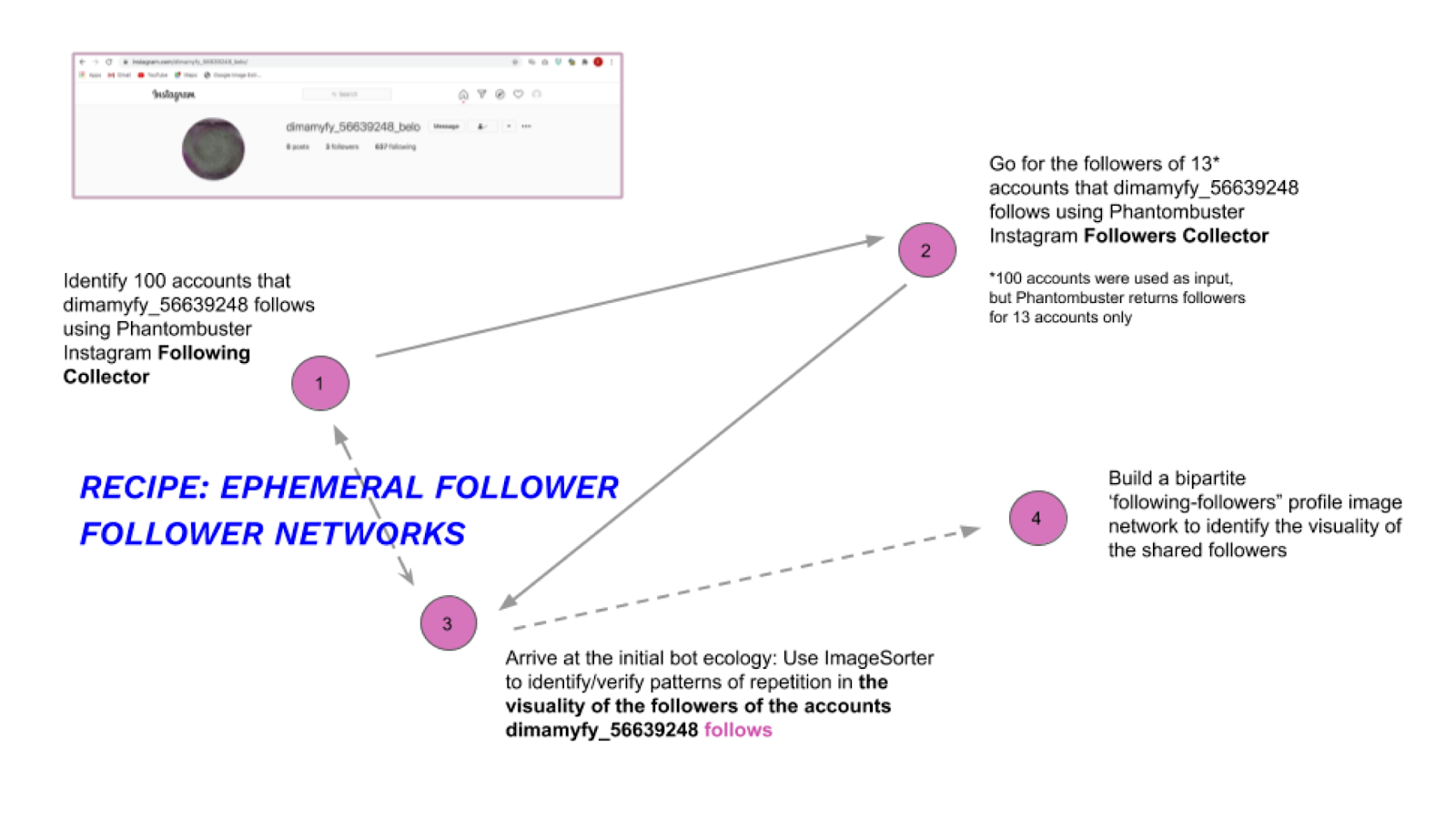 To answer this question, we made the following steps:

1. Identify and extract data for 100 of 637 accounts that dimamyfy_56639248_beta was following using Phantombuster Instagram Following Collector.

2. Go for the followers of 13* accounts that dimamyfy_56639248_beta was following using Phantombuster Instagram Followers Collector (*100 accounts extracted in the previous step were used as input, but Phantombuster returned followers for 13 accounts only).

The process of collecting followers of 13 accounts that dimamyfy_56639248_beta was following resulted in a spreadsheet file containing profile information (profile image, account name, and privacy settings) of 1284 follower accounts. All these accounts were public.

After downloading profile images using Google Chrome PlugIn DownThemAll! we first used Image Sorter to visualize the whole collection of images. After organizing images by formal similarity, we detected three main patterns of repetition in the appearance of follower profiles. 1. The first type of profiles shared the same default Instagram profile image, suggesting the ‘lowest’ quality of Instagram followers that feature no updated profile information whatsoever. All these accounts no longer exist.

2. The majority of profile images shared the same abstract or ‘cosmic’ visuality as dimamyfy_56639248_beta, suggesting that all these profiles belong to the same ecology of followers. All these accounts no longer exist.

3. The third type of profiles contained selfies and images of people (mostly women), suggesting imitation of ‘authentic’ Instagram profiles. Only some of these accounts still exist.

To see which other followers were shared between the accounts that dimamyfy_56639248_beta was following, we built a bi-partite Gephi followers-image network using Google Spreadsheets and Table2Net. 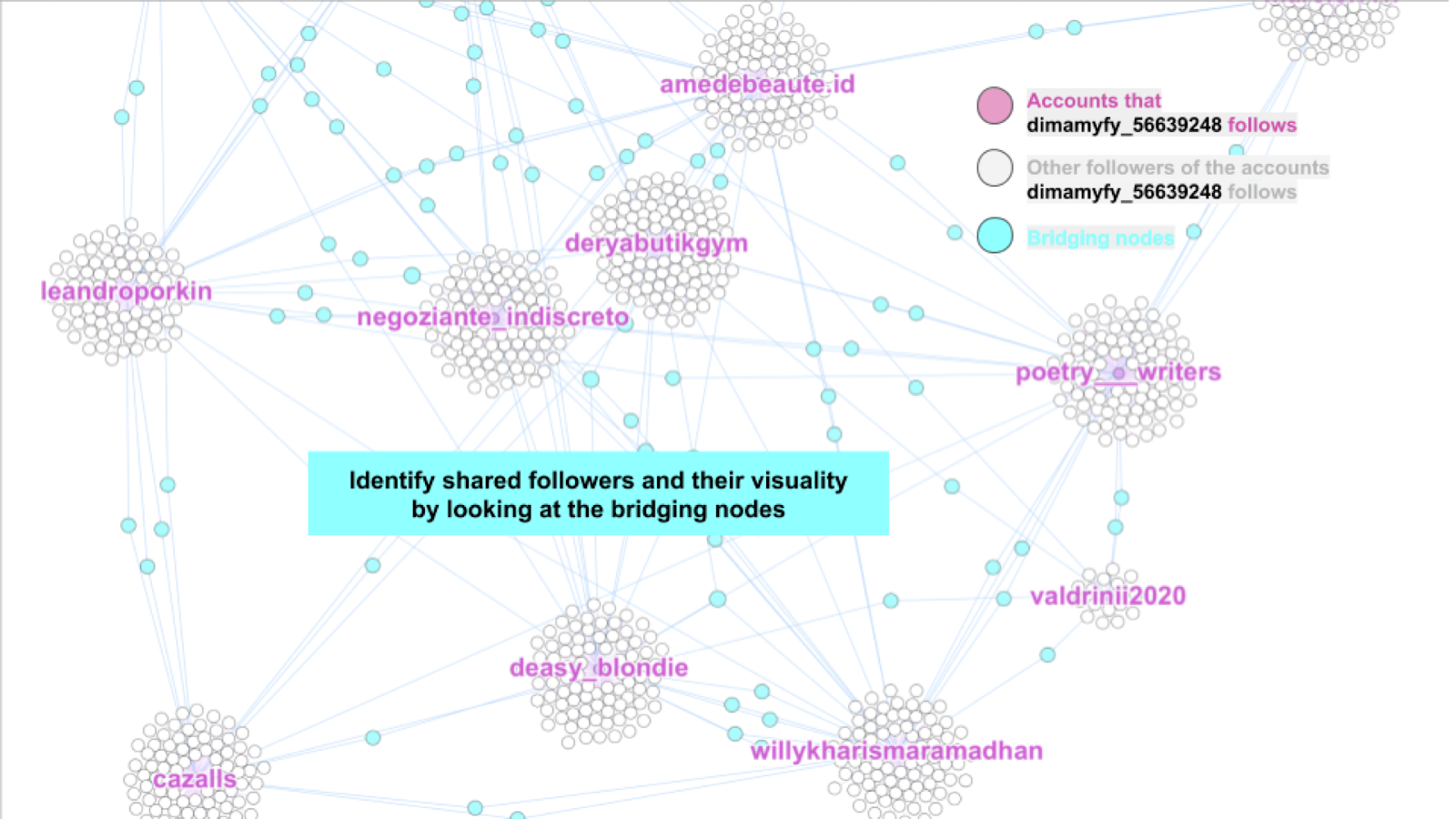 In Google Spreadsheets, we used the =COUNTIF formula to identify follower name repetitions (meaning that these accounts follow at least 2 other accounts at the same time). From 1284 followers we detected 204 such accounts. In the network, these accounts appear as bridging (image) nodes connecting min. 2 and max 3 of 13 accounts that dimamyfy_56639248_beta was following (blue nodes).

The visuality and the name patterns of these accounts reveal further noteworthy aspects:

Accounts with selfie or photo-based profile images appear to be automated accounts designed to imitate ‘real people’ aka authentic following behavior. In the network, these visual profiles rarely appear as bridging nodes/shared followers and tend to follow only one of the ‘source’ accounts (note that this might be due to the partiality of the dataset).

Accounts with the default Instagram image profile and ‘cosmic’ visuality frequently appear as bridging nodes or shared followers, indicating that these profiles connect different follower ecologies. This means that the same follower account is available for more than one client. The account name patterns of these accounts contain artificially produced combinations of underscores, letters/names and numbers.

Based on their appearance and ephemeral behaviour, we understand these accounts as typical ‘amplification bots’ that are characterized by public profiles with no posts (see also DMI 2019 summer school project on bots and the black market of social media engagement). These accounts follow many other accounts, but usually have only a few followers of their own. Accounts of this type boost visibility of the clients who purchased them for a short period of time. Highly unreliable in terms of their persistence, they appear as fast as they disappear.

Capturing high-quality bots: the network of Mary__loo025 followers of the followers

The research account Mary__loo025 was one of the accounts used to capture high-quality followers. In accordance with justanotherpanel.com, this account has received a total of 100 ‘super VIP’ or ‘100% real’ followers. With the purpose to identify what kind of Instagram followers are available and their account types, we decided to trace Mary__loo025 followers of the followers. Taking into account that previous exploratory research (see Omena, 2017) and projects pointed to the presence of ‘private accounts’ as bots on Instagram as well as accounts with no image profile (the so-called ghost accounts or Instabots), we first plotted all image profiles of Mary__loo025 followers of the followers. By doing so, we immediately detected a significant number of ghost accounts - with the default Instagram image profile (see the visualisation below). The presence of these invisible bots seems to go against justanotherpanel.com 's promise of delivering ‘100% real’ followers. 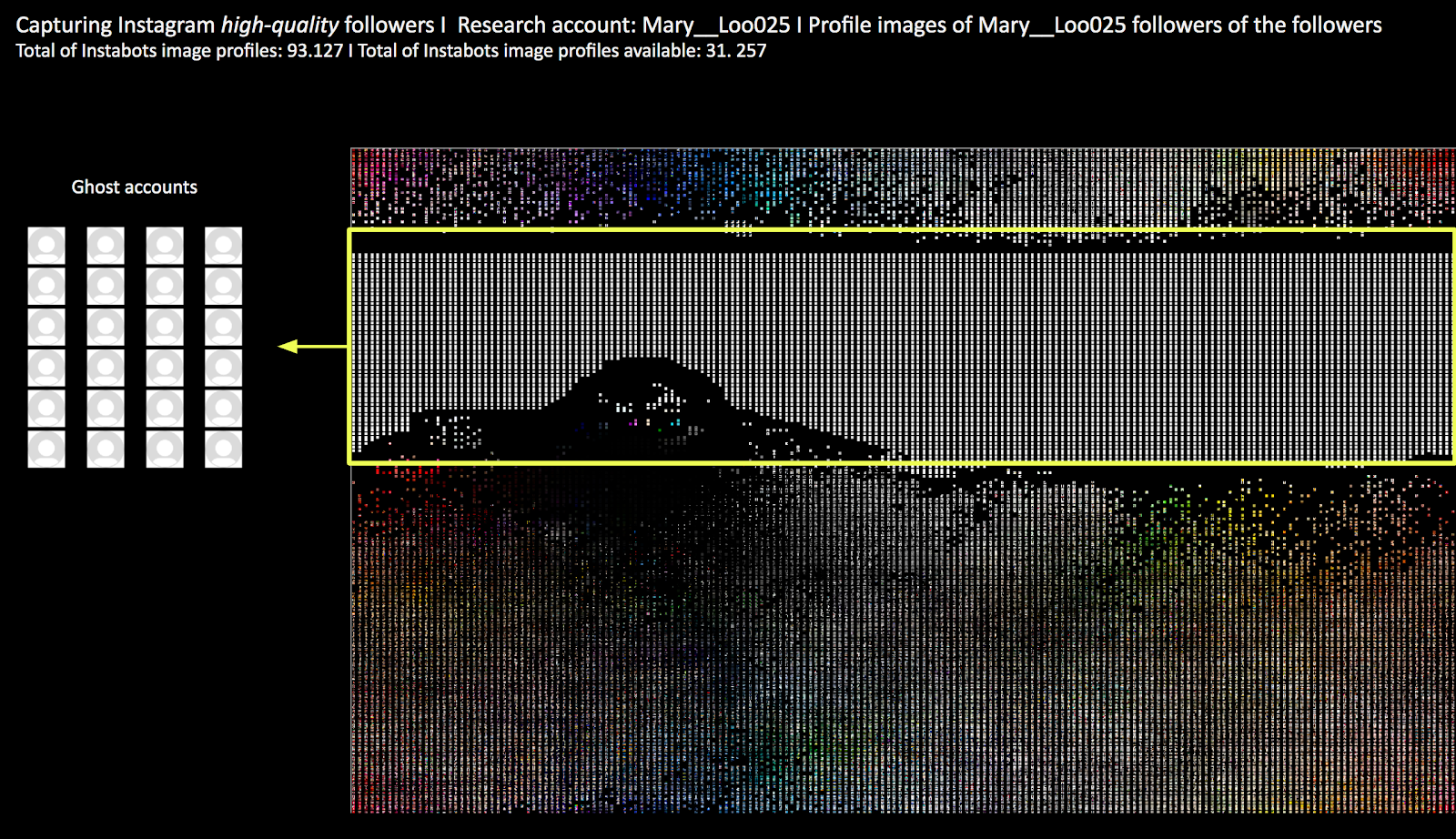 After that, we built the network of Mary__loo025 followers of the followers to further investigate the role of private accounts in the market of artificial engagement. When exploring the network of purchased high-quality bots, and knowing that nodes could be coloured by particular attributes (e.g. whether an account is public or private), we decided to emphasise only the nodes which stand for private accounts (see below). We, however, were not able to plot the image profiles due to the size of the network. The network visualization revealed private bot accounts as key actors in the follower botting ecology of Instagram. These types of accounts are positioning as central but also as bridging nodes within the networks. In other words, private accounts are not only synonymous with “high-quality bots” on Instagram, but a very important type of bot account which feeds the market of artificial engagement by serving as bridging actors; connecting different clusters of bot accounts without attracting attention. 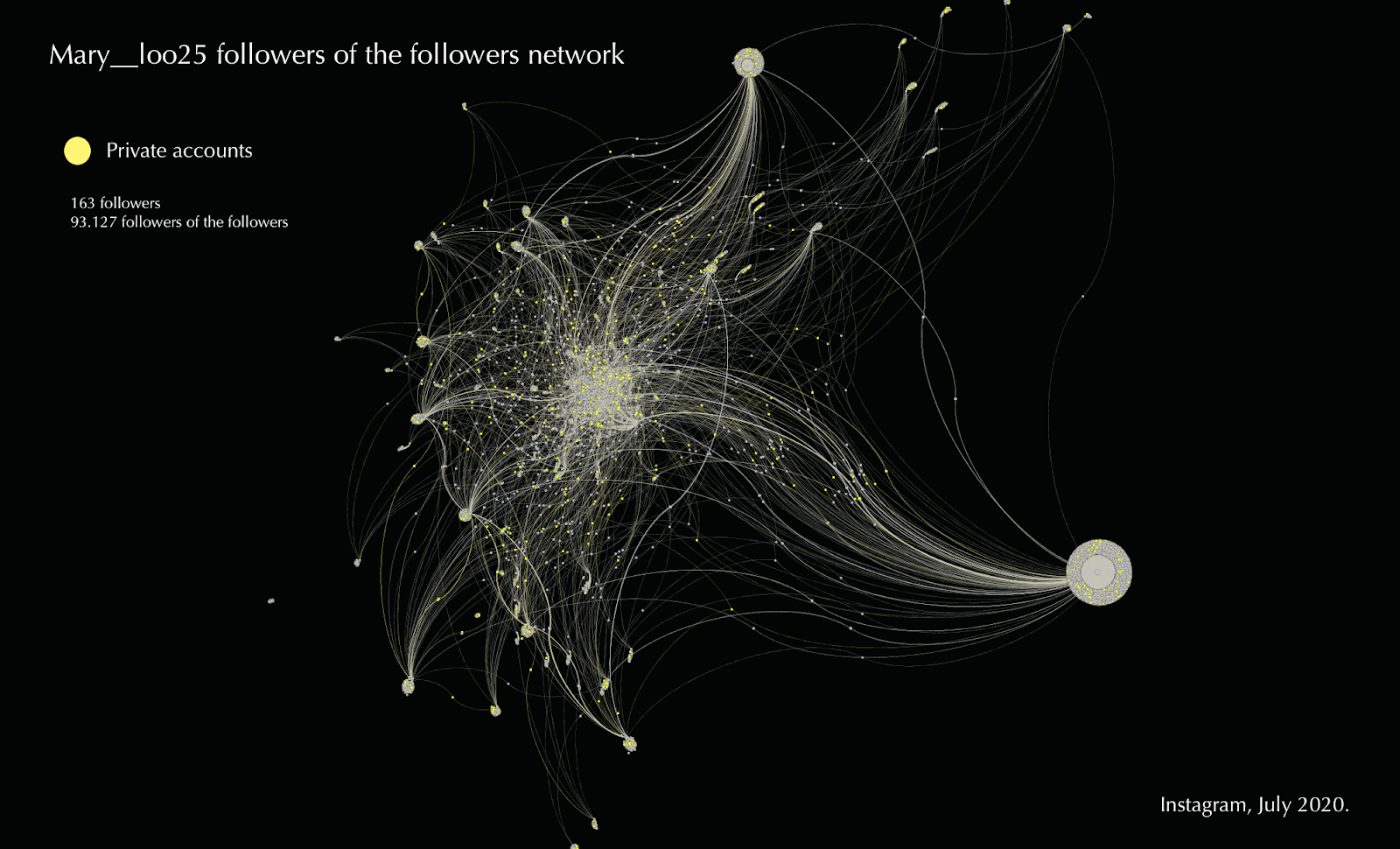 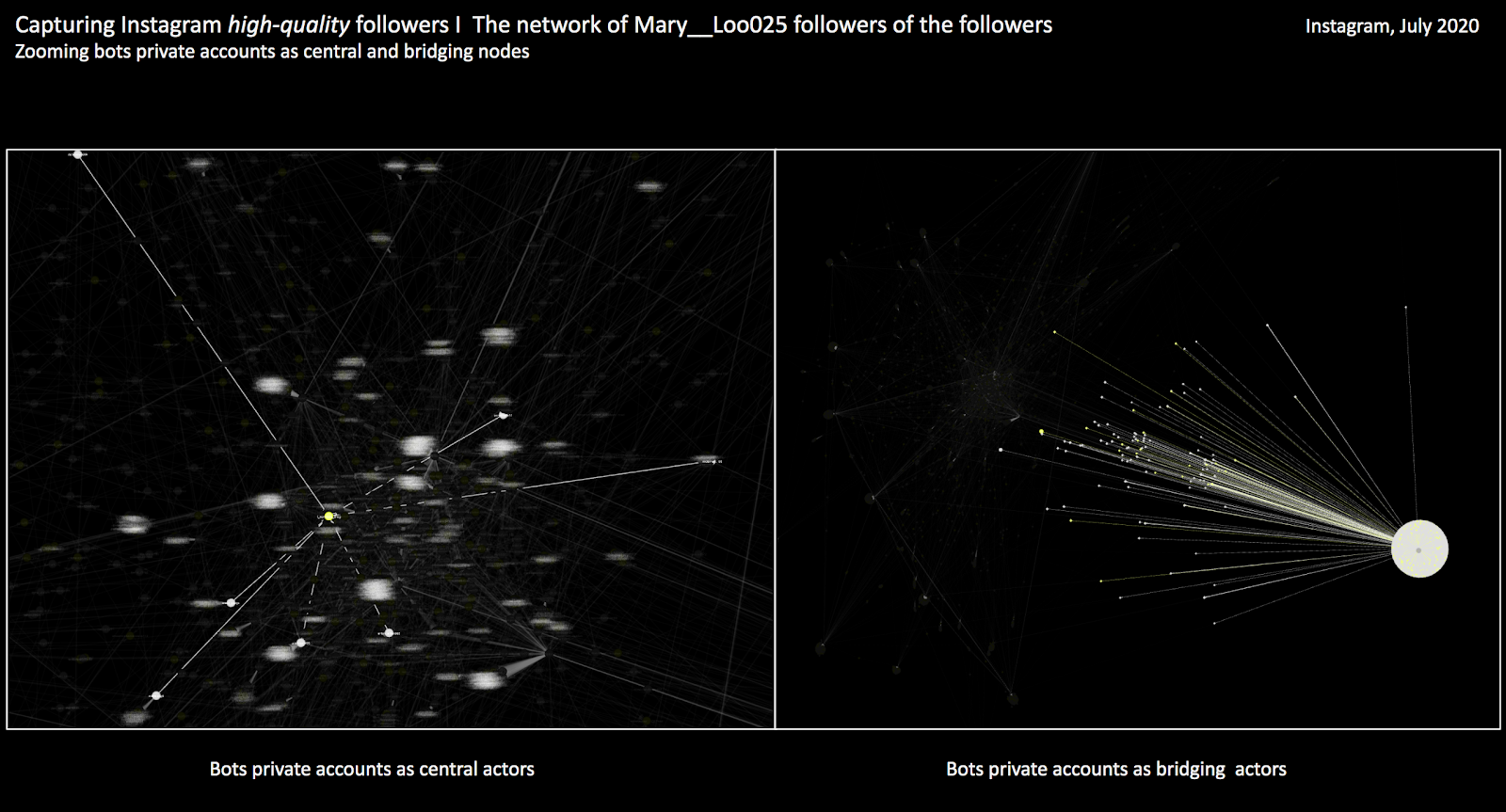 Instagram is first of all a corporate platform that allows for participation and shapes attention through algorithmic governance.

Secondly, participation is regulated according to what Instagram considers ‘authentic’ practices.

Third, on a platform such as Instagram influence is measured through follower metrics.

The good-enough follower comes to test and define the limits of the qualities of this public. It raises questions about how participation, authenticity, influence, and profit is shaped on social media platforms.