In collaboration with all the other members from the “The new far right landscape in Europe” project, initialized by Dimitri Tokmetzis, Emilie de Keulenaar and Yarden Skop.

Music videos might be an entryway into more politicized Alt-Right video’s.

The Alt-right as a group are becoming increasingly studied by academia. The research that is out there focuses for example on their presentation on social media, and their creation of platforms focused around their opinion. Where the academic attention started it’s focus on the United States, the work by Dimitri Tokmetzis has shown that several alt-right groups are gaining momentum in the EU as well. As we are now talking about a multinational phenomenon that is travelling across country and language borders, it becomes ever more important to study the way they create momentum. This study focuses on the YouTube presence of Alt-Right groups, using a database that is primarily focused around European Alt-Right movements. Through looking at these YouTube channels we can get a better understanding of the role that this platform plays within the international Alt-Right movements.

For this research the dataset listing a large number of mainly european alt-right groups that was created by Dimitri Tokmetzis has been used. This database already contained some of the YouTube channels for these groups, but where they were missing, this information has been added to the dataset. This database is available upon request.

In what way does YouTube play a role in connecting international alt-right movements?

This project has made use of the suggested videos function of YouTube. To extract these videos the YouTube Data Tools, developed by Bernhard Rieder for the Digital Methods Initiative were used. Three of these tools were used in the process, creating 2 different outcomes. The first outcome was a channel network, showing in what way the channels collected in the database were connected through suggestions on YouTube or through featured channels. The second outcome used two of the YouTube Data Tools. First, using the “Video List” tool, all channels found in the database were extracted, to get the YouTube ID’s of all videos and their statistics like the amount of views, likes and dislikes. This extraction was done by country, eventually creating a large video list per country. Subsequently the 100 most viewed videos per country were put through the “Video Network” tool, mapping relations between video’s using related video’s. This way a .gdf file was created by country that consisted of the 100 video ID’s and the ID’s of the video’s that were found in their related video, mapping out where the overlap was. Finally all these files were imported to create one large file in Gephi where overlap between the suggested videos of all the countries, groups and language area’s could become visible using Gephi. Using the ForceAtlas2 plugin then found the groups of video’s that are closely connected. 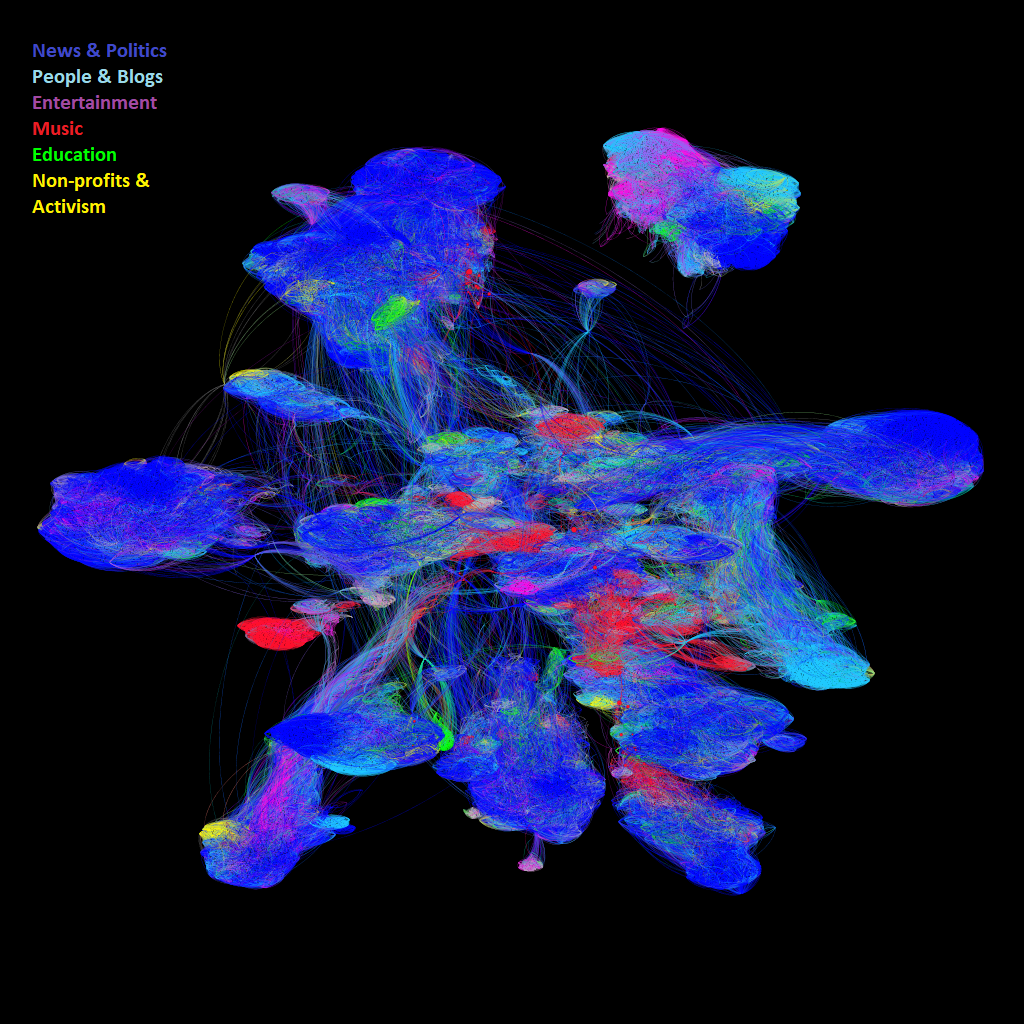 Above one of the renderings from the gephi file of all suggested video’s is shown. The map is color coded by the type that is assigned to each video. And from that, some remarkable things become apparent. At the outer ents of the network News & politics are densely around, mixed with some entertainment and people and blogs. Music and education on the other hand, in a lot of cases seem to be entry points into the different groupings that pop out of the network. These music videos oscillate between very popular pop singers like Rihanna and Ed Sheeran and way smaller and unknown artists, also in less popular genres of music. The fact that such popular musicians appear here is not that strange, taking into account their sheer popularity on YouTube, and therefore a good chance to be linked to on a lot of different types of content. But the way that smaller artists subsequently connect to more political video’s makes is possible to think that music is forming the gateway into more politicized content.

Looking through the database with all the YouTube movies it also became apparent that in the top 5 of most viewed YouTube videos, 4 of those were political raps performed by politicians in Austria. Curious in itself, it was also strange that YouTube had categorized these video’s as News & Politics instead of music.

In sum, music video’s and educational video’s seem to play an interconnecting role when it comes to alt-right videos, and also seem to form a pathway into more politicized content. As this seems to fit in with the theories proposed by gramsci on cultural hegemony the question is whether this idea is used on purpose by the alt-right movement in order to reach a larger audience first and then slowly welcome them in their political beliefs. These are very primary observations due to the sheer quantity of data that was collected in the collected graphs, and they need further scrutiny to see if music does indeed play a large role in this Alt-Right YouTube ecosystem.

These findings are far from decisive or complete, but it does show that more attention to music and other cultural forms is needed. If we want to understand the alt-right, and the reason why they are able to attract such a large group of people for their thoughts, we should look at their cultural assets. Also this research has shown that using data from YouTube can be used in order to do an analysis of a certain ideology, and identify the way that click patterns could be forming for YouTube users.