Trump and the Manosphere

The discourse aspects that ties Donald Trump to the manosphere.

An examination of social media comments compared to Donald Trump’s own discourse (Facebook posts and his campaign speeches) indicates that he relates to and possibly energises the manosphere through framing moves in his discourse which are both aligned to, and non-alienating to the ideologies and language practices of the manosphere.

In general, we found that Donald Trump’s own language does not directly use or borrow the language of the manosphere; however, clearly the manosphere is able to respond to the framing moves of Trump’s discourse.

The one common language use we found between Trump’s discourse and that of the manosphere related to the keyword “corrupt”, together with its major correlate “establishment”. The pattern of these words and their collective second order correlates, “politics” and “media” were identical in both the Trump and manosphere discourses.

The presence of the manosphere vocabulary is highly notable on social platforms Reddit and Facebook comments that are in response to his posts. As well as the engagement of the audience to this kind of content. Furthermore, the Donald Trump Twitter posts could be interpreted and examined as a portrayal of himself as an ‘alpha male’ in the manosphere context.

Donald Trump´s speeches, claims and general opinions have been frequently considered in line with more right wing ideas in US politics. The `Manosphere´ started in 2009 and is a sub-part of the larger subculture that has been related to Trump, the `Alt Right´. 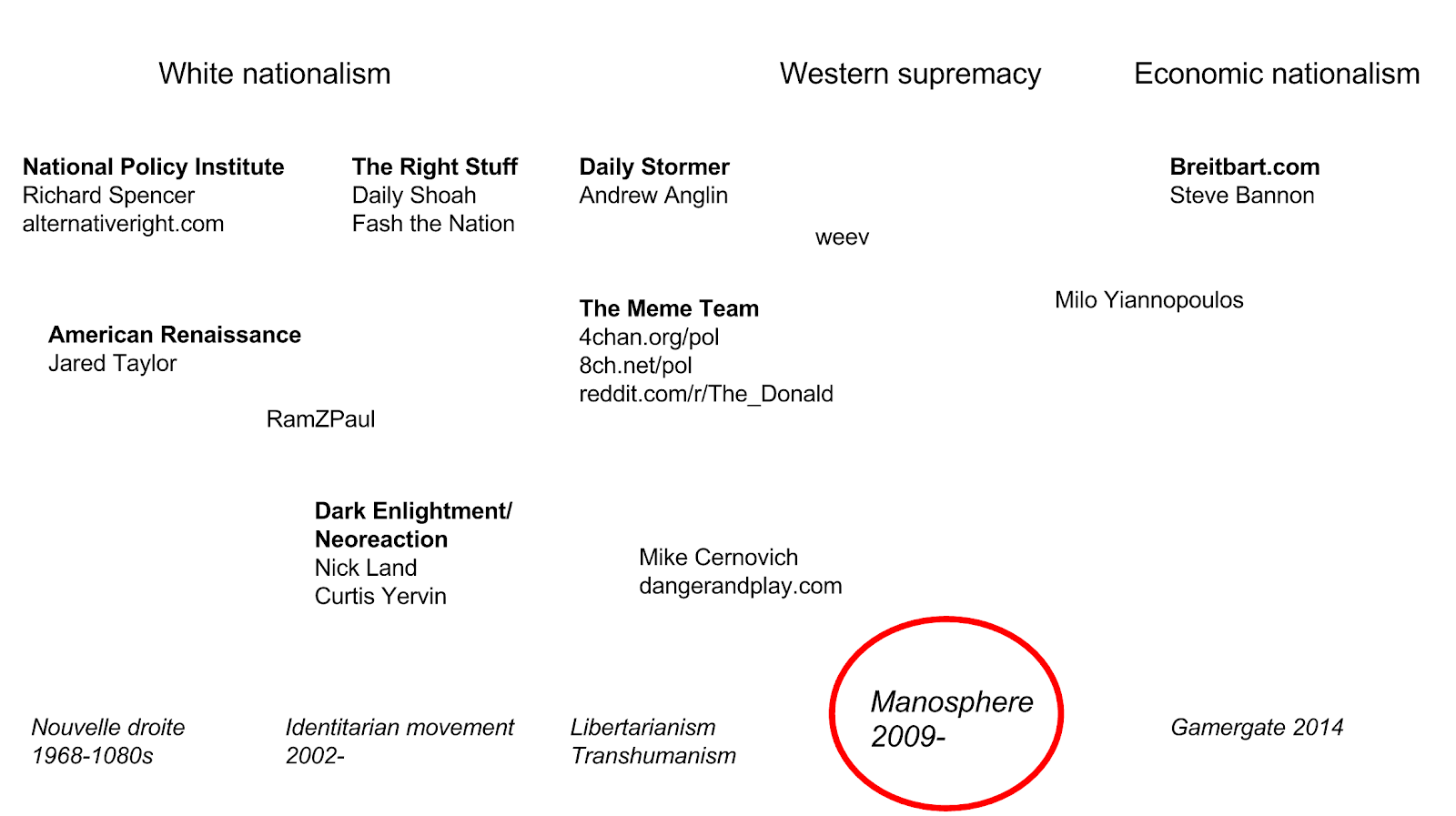 Figure 1: Relationship of the Manosphere to other Alt-right groups and figureheads. Image courtesy Florian Cramer, from a presentation to the DMI Winter School, January 2017.

Involvement in the manosphere is usually identified by keywords that act as a kind of code; ‘alpha´, `feminazi´, `snowflake´ and `cuck´ (with derivatives such as cuckservative) are just some of these. The manosphere is a loose and informal network of blogs, forums and websites, with internet commentators focusing on issues relating to men and masculinity, as a male counterpart to (left-wing) feminism or in opposition to it. Men are considered to be at their best in the `alpha-male´ form. Females are thought to be best in their traditional roles, such as in the kitchen or in the bedroom. These ideas taken into the context of Trump´s election campaign on Facebook and the responses provided by followers are extremely interesting points of analysis. By using top comment Facebook data on Donald J Trump´s Facebook page, we wanted to determine whether there was a Manosphere presence and what, if anything, triggered or sparked it. Linguistically it is important to look at what Trump says to energise such comments on his posts. Frequently he is simply posting election promotion, and he does not explicitly use the language that marks membership or affiliation with the manosphere.

The aim of this project has two stages. Firstly, to find out whether Trump´s Facebook posts provoke or stimulate a reaction from the manosphere and if so, how does Trump´s language energise the manosphere in Facebook comments.

We expect to find that Trump´s language is not a sole energiser of the manosphere, but the fact that he does not alienate those who identify with manosphere ideals, means that he allows for their comments and involvement. We would expect to find more manosphere related language in comments responding to Trump´s posts that relate to women, his wife or daughter and those that insult and undermine his opponent, Hillary Clinton.

Therefore, our hypothesis is: Trump´s language making reference to women, negative or positive will provide a platform for comments containing manosphere words and content. This then responds to the research question: How does Trump’s language energise the manosphere in Facebook comments?

The language of manosphere and certain specific keywords that this audience developed are detected under the Donald Trump Facebook posts in the top comments section by the users that support him. The high number of likes on the comments with particular words such as ‘cuck’, ‘SJW’, ‘snowflake’ shows that the manosphere audience is very active on Donald Trump’s page.

Figure 2: Screenshot of a highly liked Facebook comment on Donald Trump’s profile with the word “cuck” in context.

However, compared to the Reddit platform the manosphere audience is even more engaged in supporting Donald Trump and especially during the election period the Lineminer tool shows a huge peak of the use of manosphere language (especially ‘cuck’). While looking closer at the posts by Donald Trump that energised the activity of manosphere related content it appears that the posts are quite common and without intentions to address this particular audience. 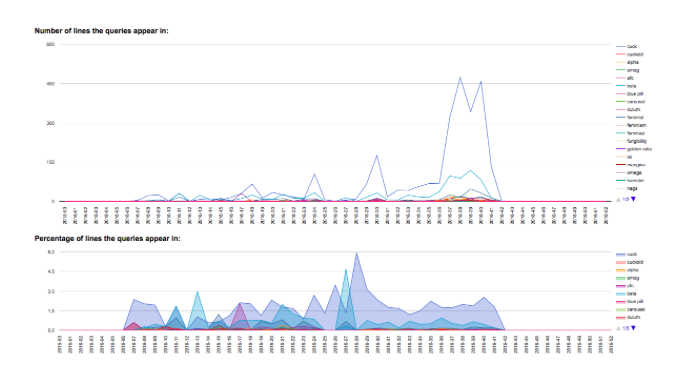 Moreover, using the AntConc tool the number of manosphere related terms were discovered among the top comments of Donald Trump Facebook comments dataset for 2016. The example of the word ‘cuck’ shows that the term was used in the comments throughout the year and not only surrounding certain time periods.

While doing subjective qualitative analysis of Donald Trump’s Facebook posts and also posts from Twitter dataset it could be interpreted that he portrays himself as an ‘alpha male’. Going through the content multiple posts show that he mostly uses the words like ‘wonderful’, ‘beautiful’ to describe his wife or family. As well as, portraying himself as a strong leader by commonly using certain words such as ‘strong’, ‘leader’ and provocative aggression in his language.

The results we found show that Trump´s facebook post does provide a platform on which Manosphere like language can be used. However, we found that a lot of the comments with this language were found on posts from Trump containing all different types of content. The comments were not specific to female orientated. Many of the posts actually contained no caption, but simply a video or photo that sparked a reaction. Therefore it is difficult to claim that Trump´s language is what sparks a reaction, but more the fact he is posting at all. His social media presence in itself is arguably what provokes a reaction and sparks engagement.

In conclusion, we found that there was a significant presence of manosphere type language in the top comments of Donald Trump´s Facebook posts. We did however notice that these were present on all different types of posts, and often videos shared with no text. We have concluded that there is no obvious correlation between the language in Trump´s posts and how this specifically energises the manosphere. However, the fact that Donald Trump does not disengage with comments of this nature means that he energies the manosphere simply by posting and affording users of this type a platform on which to comment.

Mountford, J.B. (2015) Creating masculinities online: Bronies and the red pill. Dissertation, for Degree of Master of Arts in Gender and Media. School of Media, Film and Music, University of Sussex.