Briefly describe your most significant findings.

There are strong assumptions about a presumable Trump filter bubble, and binary liberal vs. conservative polarization. Some of this binary polarization is visible in online media data, as the WSJ Red Feed - Blue Feed notably shows. However, this de-emphasizes potential nuances and subgroups within the bubbles, and presupposes that the bubbles are relatively impermeable. We test these assumptions by analyzing links to news media shared by self-identified Trump supporters, and comparing them to self-identified Clinton supporters and randomly selected US Election tweets.

To what extent were there different ‘filter bubbles’ on Twitter during the U.S. elections (November 1-15, 2016), and if so, what it did they look like?

Based on the uselections dataset, we created a co-hashtag graph in Gephi based on the hashtags used by people with either ["imwithher"] or ["trump"] in their bio. We distinguished between different clusters, 'conventional' (i.e. hashtags used by official campaign accounts) and 'fringe' (i.e. more 'radical', so to say, hashtags that were used by tweeters but not the official candidates and their accounts. Based on these four different hashtag lists (two per candidate), Emile den Tex then programmed new datasets with users who tweeted at least 15 times with 2 different hashtags of our lists between November 1, 2016 and November 15, 2016. Ergo, in the new dataset, we captured all tweets sent by self-identified supporters of either Clinton or Trump with either conventional or fringe hashtags. The next step was to distinguish the host frequency (i.e. the media they referred to the most). This created different lists of host frequency, thus, the media they referred to the most, for the four groups. We then compared these lists with the host frequency for the whole uselections dataset (between November 1 and November 15).

Which hashtags do they use?

Hashtags used by each of the two groups

How distinct is their media consumptions from Hillary supporters?

Which hashtags do they use? 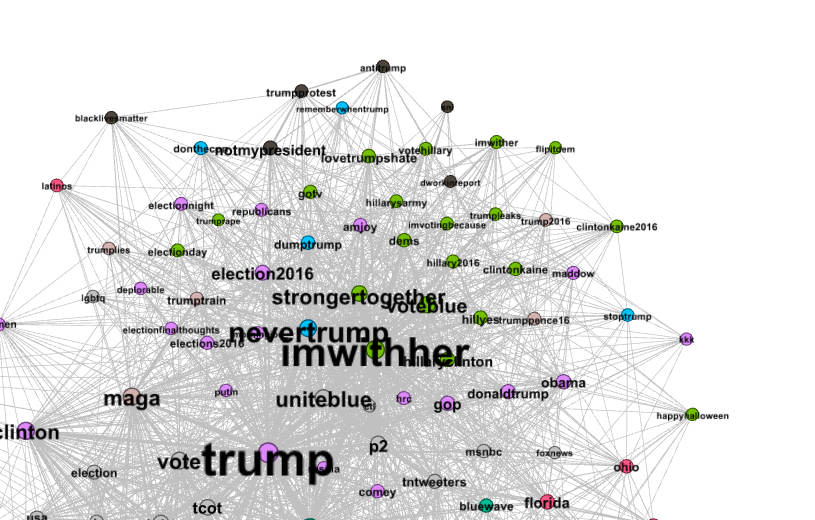 Division in groups of Conventional and Fringe Hillary supporters (both with Imwithher in their bio) produces these typifying hashtags:

Key Finding: - The bubbles exist. People who openly identify as Trump supporters link to the same media, despite using different hashtags (conventional vs. fringe). The same can be concluded for self-identifying Clinton supporters. Micro: - A Clinton bubble exists, but: self-identifying Trump supporters on Twitter (identifying themselves as such in their Twitter bio) are way more plentiful (approximately 35K as opposed to 8,5K) - The Clinton bubble appears less isolated as its members refer to most media which the general public refers to as well - The one New York Times article Trump supporters have been referring to is an article on the FBI investigation which alledgedly debunked the link between Trump and Russia. This suggests not only that the bubble can be fluid, but also implies that people within their bubble only refer to non-bubble media when they fit their policitical narrative. - CNN.com is generally most often referred to within the entire dataset, but does not appear in media links shared by Trump supporters, and only very limited in media links tweeted about by Clinton supporters

/> Suggestion for further research: Analysis of Trump/Clinton supporters' follower networks to prove the existence of bubbles.