Twitter use during the US presidential campagin and the aftermath This project is one part of the larger Winter School 2017 study Beyond the bubble? Exploring the 2016 US election echo chambers

Most joyful: #PresidentTrump
Most angry: #NotMyPresident
Most feared: #DonaldTrump

When we think about filter bubbles, different political views and Hillary and Trump supporters, the dominant view appears to be that Trump supporters are aggressive and angry (Swaine; Williamson). Trump his behaviour in the (social) media can often be considered to be offending and insulting, and it could be said that his supporters behave in a similar way. However, it might be interesting to delve deeper and take a look into what emotions are related to tweets send around the elections. Of course the context of a tweet or any kind of message is important, but a basis analysis of words used can provide a view of the dominant emotions. Also, Twitter is considered to be capable of “reflecting collective emotive trends” (Stieglitz and Dang-Xuan 219). Therefore, it provides us with the possibility to display dominant emotions per hashtag and bubble. There is a number of systems, or lexicons, that would make it possible to analyze tweets, for example, the Wordnet Affect Lexicon, and the General Inquirer (Mohammad and Turney 1). However, we will make use of the NRC Emotion Lexicon (EmoLex) because it contains a larger set of words, and instead of six emotional categories, EmoLex makes use of eight different categories.Our aim is to find out if Trump supporters are really that angry, and if Hillary supporters might be angry too.

How are hashtags around the U.S. elections related to emotions in tweets? (Hillary supporters are angry too.)

To be able to analyse different emotions and sentiments used in tweets we used the Word-Emotion Association Lexicon (EmoLex) created by the National Research Council Canada. EmoLex “is a list of English words and their associations with eight basic emotions (anger, fear, anticipation, trust, surprise, sadness, joy, and disgust) and two sentiments (negative and positive). The annotations were manually done by crowdsourcing” (saifmohammad.com). The weighing system was integrated into TCAT7 results of the ‘uselections’ dataset for a two week period around the election day. Therefore every single word in every tweet received a score based on EmoLex.

To create a selection in which tweets would be most significant, lists of the top 20 most used hashtags were created for each day in the fifteen day period. With use of the triangulation tool the hashtags were selected that appeared most consistently in the top 20 per day. Of all hashtags there was a selection of 20 hashtags that appeared six times or over in the daily lists. This is the list that was formed (in parentheses the number of days the hashtag appeared): Once the list of significant hashtags was established all tweets within the dataset were gathered per hashtag in the fifteen day time period. Subsequently, a script extracted the emotional and sentimental scores, and ordered them by day and in totals. Based on this, data visualizations were made to be able to display the development of emotions over time and the dominant emotions. Based on the data of the two different supporter groups we were also able to divide the collection of tweets. Consequently, the total of emotions per hashtag could also be calculated for both supporter groups.

The visualization above shows the total use of each emotion per hashtag. We can see that #Trump was by far most used, and that #Hillary was already less used in the same period of time. However, #MAGA (Make America Great Again) was almost used as often. Something that stands out is that the emotion ‘trust’ is related to the most in all tweets containing these hashtags. Another emotion that is relatively constant is ‘anger’, the anger-bubble almost always scores in second to fourth place. Only in tweets containing #election2016 the anger-bubble comes in fifth place.

One thing that stands out when we look at the sheer amount of tweets is that #Trump, but also Trump in general, creates vasts amounts of attention. Therefore, it is clear that Donald Trump is a much discussed person on Twitter, but more importantly, even more so than Hillary Clinton. If we take the eight emotions into consideration, there is one constant emotion that remains dominant. That emotion is trust, an initial response could be to question this result. But in the end, everything in politics is related to trust or distrust in the political candidates and the system in general. Besides trust, there also are significant, and steady positions for anger and anticipation related to all top hashtags. But to say more about these emotions we have to look at the next table. 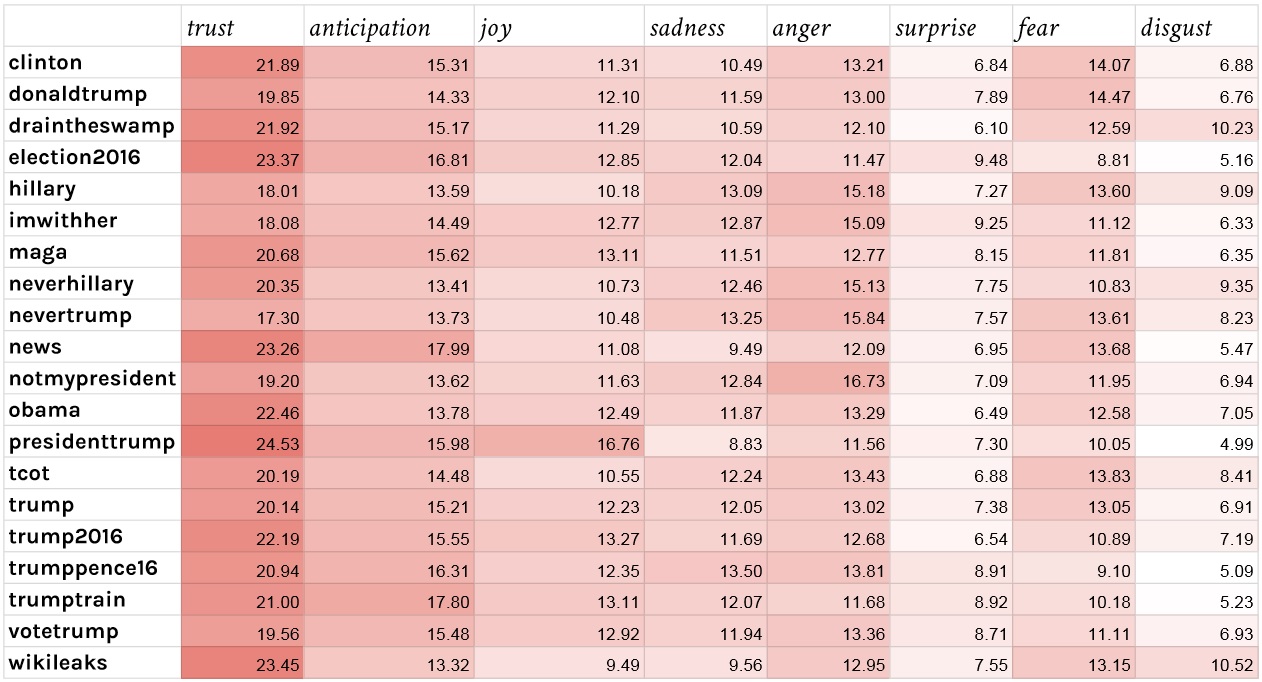 Total of emotional scores in percentages for all Twitter users

This table shows more specific that ‘trust’ is the most used emotion in general. The emotions ‘surprise’ and ‘disgust’ score most consistently the lowest with percentages mostly under 10 per cent. Apparently Twitter users in general barely portray surprise or disgust when they tweet about the US elections. More interesting are the percentages for ‘joy’ and ‘sadness’ related to #PresidentTrump. The percentage of joy is relatively high, and for sadness it is relatively low. This could have to do with Trump supporters being joyful about the election results. However, it could be expected that there would be a higher rating for sadness, since Hillary supporters could relate to that emotion. It could be the case that #PresidentTrump was primarily used by Trump supporters in the days following the elections. Moreover, the emotion anger scores high in tweets containing hashtag #Hillary, #ImWithHer, #NeverHillary, #NeverTrump, and #NotMyPresident. These hashtags might have been used more often by Hillary supporters to show their discontent.

If we compare the Hillary supporters table to the Trump supporters table we can see that dominant emotions range over more categories. The most extreme emotion is ‘sadness’ combined with #NeverHillary. Furthermore, it is surprising that the most constant emotion appears to be ‘surprise’ within those fifteen days. Whereas it is an emotion that is barely present in tweets written by Trump supporters. Even though surprise scores pretty high in most hashtags among Hillary supporters, we can see that in general the range of emotions is way more diverse per hashtag. So, Hillary supporters might be more diverse as well, or they support Hillary for different reasons. Whereas supporters of Trump might look for more or less the same political leader.

This is an example of how a hashtag evokes high emotional scores before the election day, and afterwards the emotional value and the amount of tweets diminish significantly. More specific to #Hillary is that the ‘trust’ and ‘anger’ emotions score constant in the higher regions in this range of emotions. ‘Surprise’ remains the emotion to score the lowest. What we can see in this specific graph, combined with the knowledge of the two previous tables, is that most of the anger in #Hillary can be linked to Trump supporters. Furthermore, we can see that surprise is pretty significant in the table for Hillary supporters, but it does not show up as an important emotion in this total. This is probably due to the larger dataset of Trump supporters that we were able to use. So, in these totals, Trump supporters will often have a larger impact than Hillary supporters.

This bump chart shows how #NotMyPresident came to life just after election day. Furthermore emotional scores appear to fluctuate over time, for example ‘anger’ becomes more substantial after a day and remains pretty constant afterwards, but ‘joy’ begins high in the ranking and fluctuates exceptionally over time. The apparent anger because Trump won the elections is clearly visible, but the imaginable chaos among Hillary supporters could be found in this overview showing that emotions are all over the place. However, if we look at the statistics it shows that Trump supporters actually also displayed anger in relation to #NotMyPresident, but that might have been for other reasons, for example an angry feeling because Hillary supporters complain about the results.

The bump chart of #DonaldTrump displays how the hashtag became increasingly more significant just before election day. More specifically the emotions ‘fear’, ‘sadness’, and ‘anger’ spiked extremely. However ‘trust’ remains particularly constant over time. Furthermore, the ranking of emotions fluctuate less after the spike than before, this could be due to the fact that every tweet related to this hashtag was written based on the same recent news.

#Obama: Emotional scores over fifteen day period The emotional scores for #Obama display a constant capricious range of emotions. However there is a significant dip in volume just before and during election day. In this range of emotions ‘trust’ remains fairly constant, but when it shows an extreme dip ‘disgust’ rises in importance. Furthermore, ‘surprise’ remains an emotion that scores relatively low. We can see that Obama gets less attention during the election day, but the attention rises again afterwards. Furthermore, based on this visualization, and the drop in trust, and rise in sadness and disgust, we could distill that Obama received some negative publicity in the days before the elections. 6. Conclusions (This conclusion is part of the entire Twitter filter bubble research) “I’m offended by something a famous politician said. I’ve chosen to use the internet to express my opinion about it. My beliefs were challenged, and I will stand up for myself. I will mock the famous politician that I do not agree with on Twitter. I’m doing my part by tweeting angrily at a famous politician. The famous politician will see my tweet and change their behavior. My followers will praise me for my beliefs, because they should think the way I think. I’m making a difference. I’m doing my part. I’m part of a movement.” The text from the installment ‘ Famous Politician’ by performance art project That Poppy quoted above, ironically addresses the process that this research has investigated on Twitter (Sinclair). People indeed take to Twitter in order to engage in an online conversation about the U.S. elections, and largely direct their messages to counter the candidate they do not agree with. The expression of the That Poppy persona’s conception that her tweet will alter the behavior of the politician, or their following for that matter, is openly naive. It gives the viewer a clear sense that this is erroneous reasoning, mirrored by the findings of this research. The element of emotions such as anger, anticipation and trust that come forward in the text point towards our findings as well. What we have seen in this research is that filter bubbles do exist, but that they are perhaps less rigid and all-encompassing than often assumed. More specifically, when conventional versus fringe hashtags are taken into account, it shows that the public on Twitter at large is primarily focused on receiving the information that fits their beliefs, and that counters their political opponents. This has been shown by the sources referred to in the different groups established. Notably, this research was able to distinguish a nuance within user groups, consisting of people that only operate within the more conventional or the more fringe iterations of the filter bubble. No significant difference was found, however, in terms of the links and sources shared within the different groups of Trump supporters, nor of the different Hillary supporters. It should be emphasized that filter bubbles are mainly established by the individuals themselves, as they choose what to share. Even when we take the sentiment analysis into account we cannot say that there are very strict emotional bubbles, because Trump supporters are not the only ones that are angry - they even appear to more proud than anything else. Hillary supporters appear to be more diverse when looking at their emotional scores, but there are always nuances to be made, and then we end up with a whole cloud of bubbles. Or maybe even better a filter fountain.