#TheFamily Ties: Performing the Network and Sexuality on Twitter

Since then his online presence is largely restricted to Twitter - with a reference to the Rolling Stone profile in his bio. Surprisingly, as of 15 January he has over 500.000 followers, who call themselves #TheFamily. This is an allusion to the Manson Family, as Charles Mansons sect is known. Moore is habitually addressed as TheFather and calls his followers his children. In line with his past in pornography, Moore posts explicit material and asks his followers to do likewise. He formulates specific #assignments, which result in either nudity or humiliation. People are asked to send in nude pictures of women, which he then retweets. Often these pictures are selfies submitted by the women depicted. The humiliation as a rule revolves around sleeping or passed out people, who are for instance depicted with condoms on their faces (Moore formulated this assignment as #snakeskin).

Ever since 2011 the popular press have described Moores following as a cult (Gold 2011, Stern 2012, Eördögh 2012, Sandoval 2013, Markowitz 2014). The emphasis lies on the perceived willingness of his followers to put themselves in compromising positions, claiming they will do anything for their leader. The mainstream publications generally will not include images, because of their explicit nature, or place a warning. Hunter Moores reaction to the depiction of these activities as a cult could be described as denial of responsibility. Moore states that his followers started using the hashtags #TheFamily and #TheFather, thus dispersing responsibility onto the network (Markowitz). It is not often that these publications document reactions by his followers. One former member says that I truly believe if he told someone to kill themselves they wld [sic] do it. (Ibid). On Twitter Moore regularly brags about using sex to raise money for good causes. What do you besides pretend youre not gay. I get girls naked. And you hate me? (Moore 2014a)

In order to test these claims about the nature of this group or network we took to Twitter and asked:

- What kinds of activity do the Twitter hashtags #thefamily and #thefather organise?

- What animates this group and what are its dynamics?

To answer these questions we collected tweets around the hashtags #the family, #thefather and #revengeporn using initially the Twitter Search API on 14 January, and the streaming API from 15 January onwards. These were imported in the Twitter Capture and Analysis Tool (TCAT). For the purposes of our analysis we filtered out revengeporn as this term is a label for the phenomenon imposed from the outside - it is not language used by #thefamily community itself. 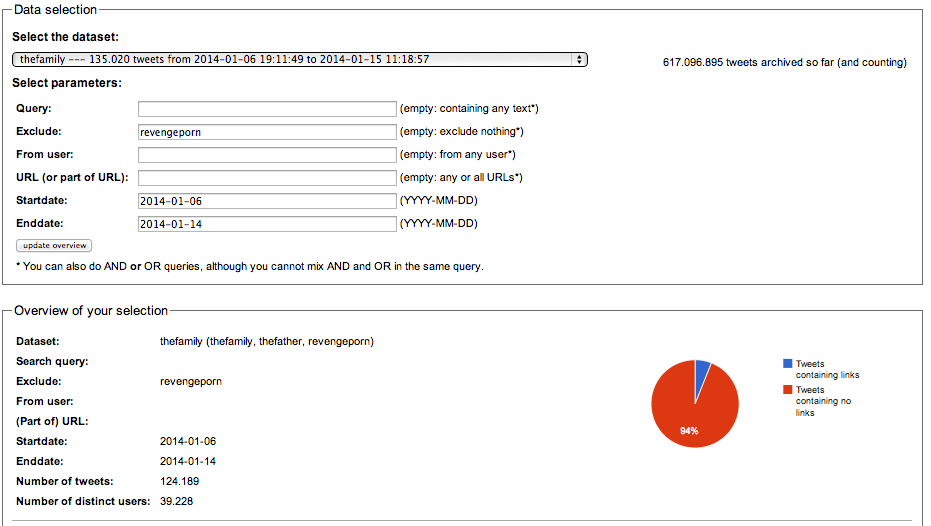 Who are the contributors?

To identify the type of users within this network by their range of activity as well as the weight of their contribution we exported user activity tweet frequency and mention frequency. 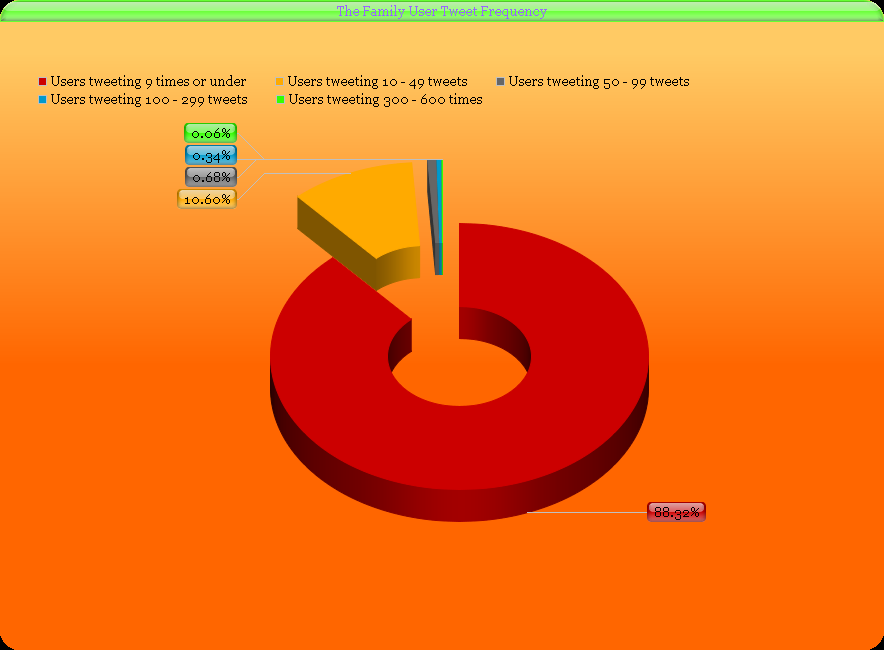 User by range of tweet frequency. A majority of the users tweet under 9 times or under regarding thefamily in a period of 9 days. 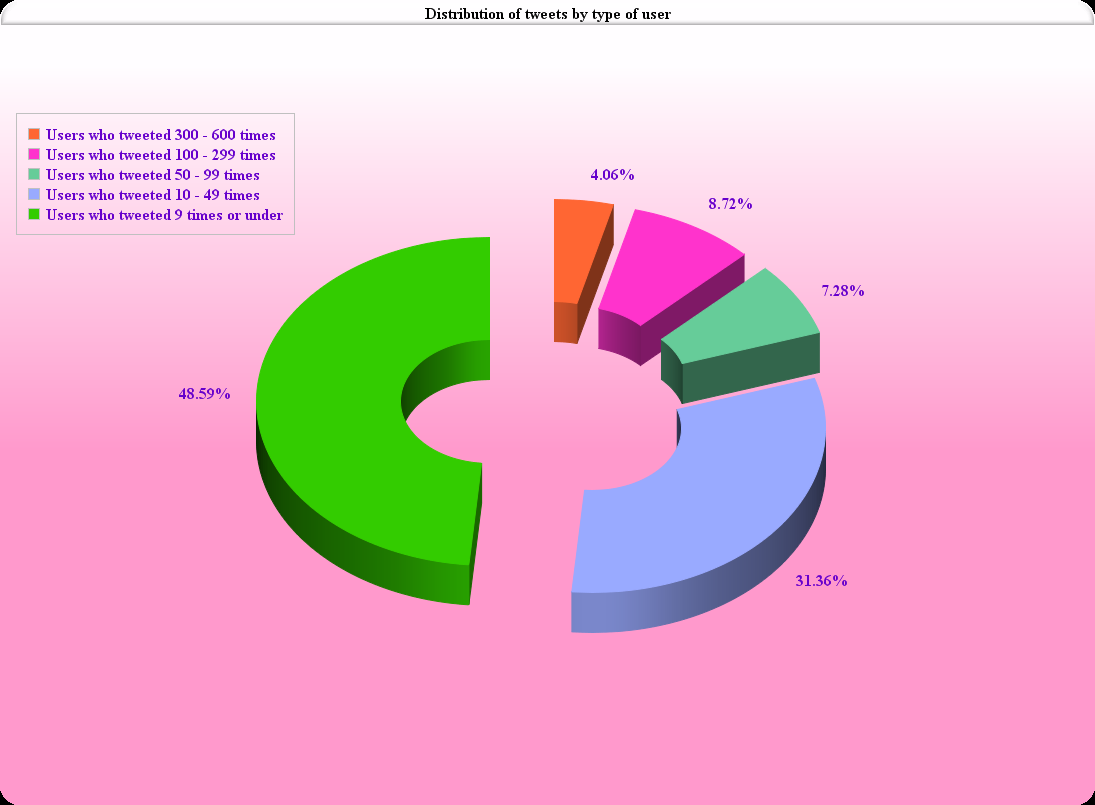 Distribution of 97263 total unique tweets by type of user. A majority of tweets are comprised of the users who tweeted 9 times or less.

Almost half of total unique tweets are tweeted by users who tweet nine times or under. According to the previous chart which depicts this group as being a majority of users (88.32 percent) this means that almost half of the activity of unique tweets are by a large number of users rather than a small selection of very active users. The majority of content is comprised of less active users but their contribution outweighs the contribution of highly active users. The second largest contribution of tweets (31.36 percent) is comprised of users who tweeted 10 - 49 times. According to the previous chart this group makes up 10.6 percent of total users.

To identify the types of content and activities that animate the group we analysed the top 20 most tweeted URLs and the top 20 most retweeted tweets on these hashtags by using the TCAT URL frequency and the Identical tweet frequency functions. An analysis of the top 20 most shared URLs shows us that, in contrast to the emphasis of descriptions of this group in popular press and self-descriptions which focus on the sexual nature of the content shared in this network, only 6 of the most shared URLs are visual content including sexualised content, self-mutilation, humiliation, revenge acts, and other forms of violence. 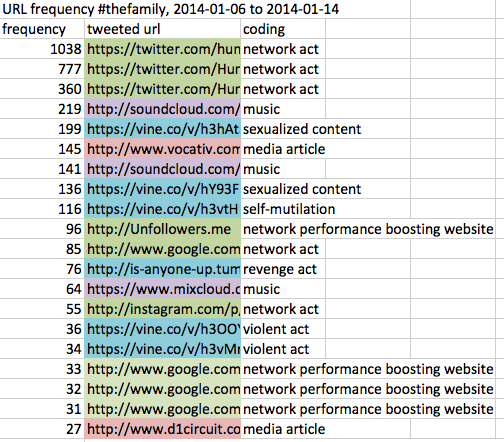 Surprisingly, a larger proportion of most popular content in the network, almost half of the most shared URLs, consists of links to network performativity references, including Hunter Moore status updates inviting members of the family to express their commitment to the group by means of Twitter following, websites that boost the number of Twitter followers, and screenshots to Twitter Trends showing #thefamily as trending topic. An analysis of the top 20 most retweeted tweets reinforces the finding that the practices around these hashtags revolve to a significant degree around performative network acts, rather than around explicit content.

More than half of the most retweeted tweets revolve around network labour. They are invitations to expand and strengthen the family ties by means of performing metrics, i.e. retweeting, following, using the #thefamily hashtag and reporting those who do not follow members of the family. Those who do not participate in performing the network by for example not following members of the family are reported as #stepchildren (Moore 2014b).

We used the co-hashtag analysis feature of TCAT to explore the themes that circulate in this network. The minimum frequency was set to 10 and the hashtags #thefamily and #thefather were removed as these were used to create the collection. In line with our previous analyses, one of the major emerging themes in the network is the cluster of hashtags seeking retweets and follow-backs: RT, retweet, follow, followback, teamfollowback, familyfollowtrain, shoutout, etc.

Other major clusters are: 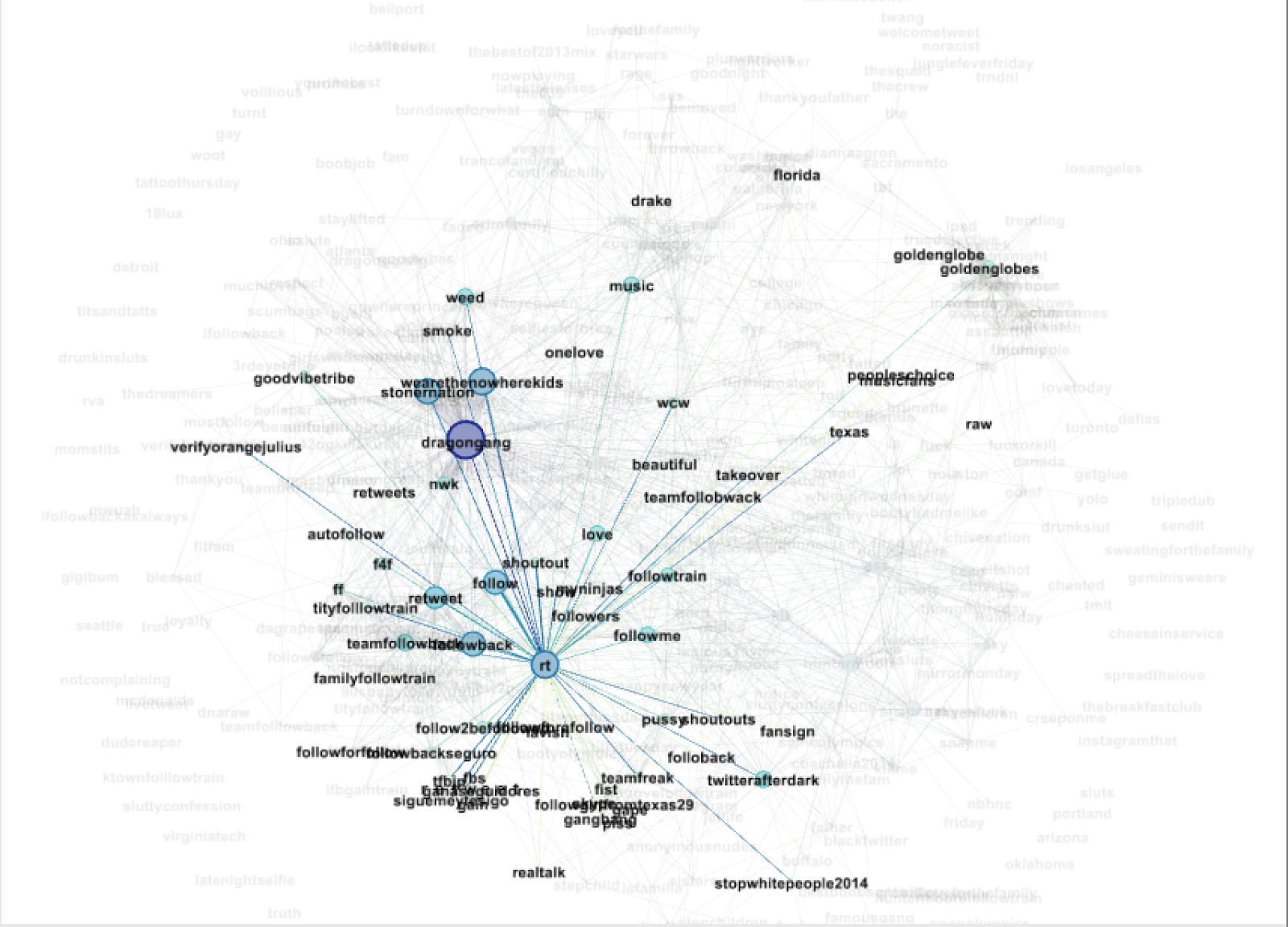 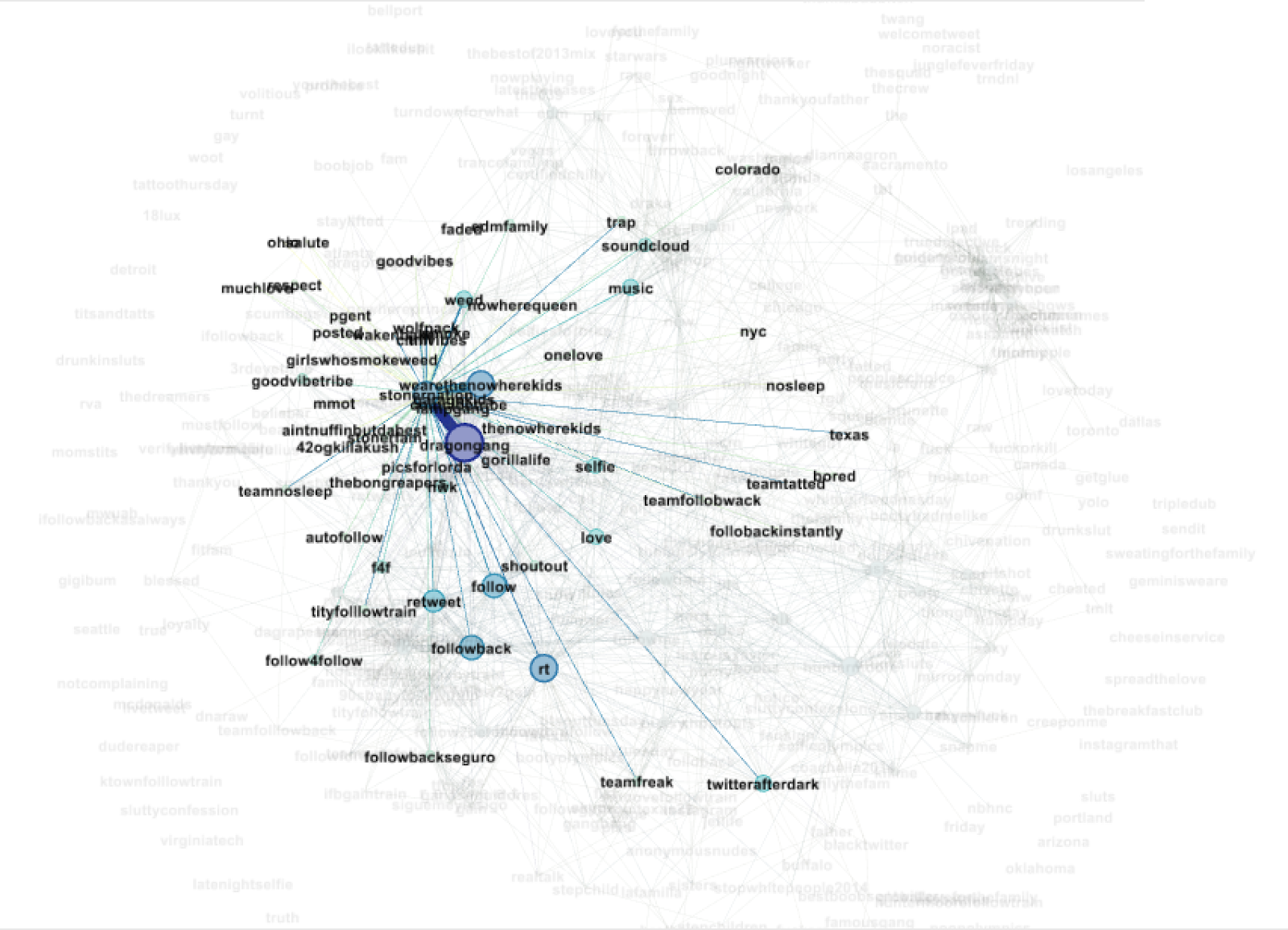 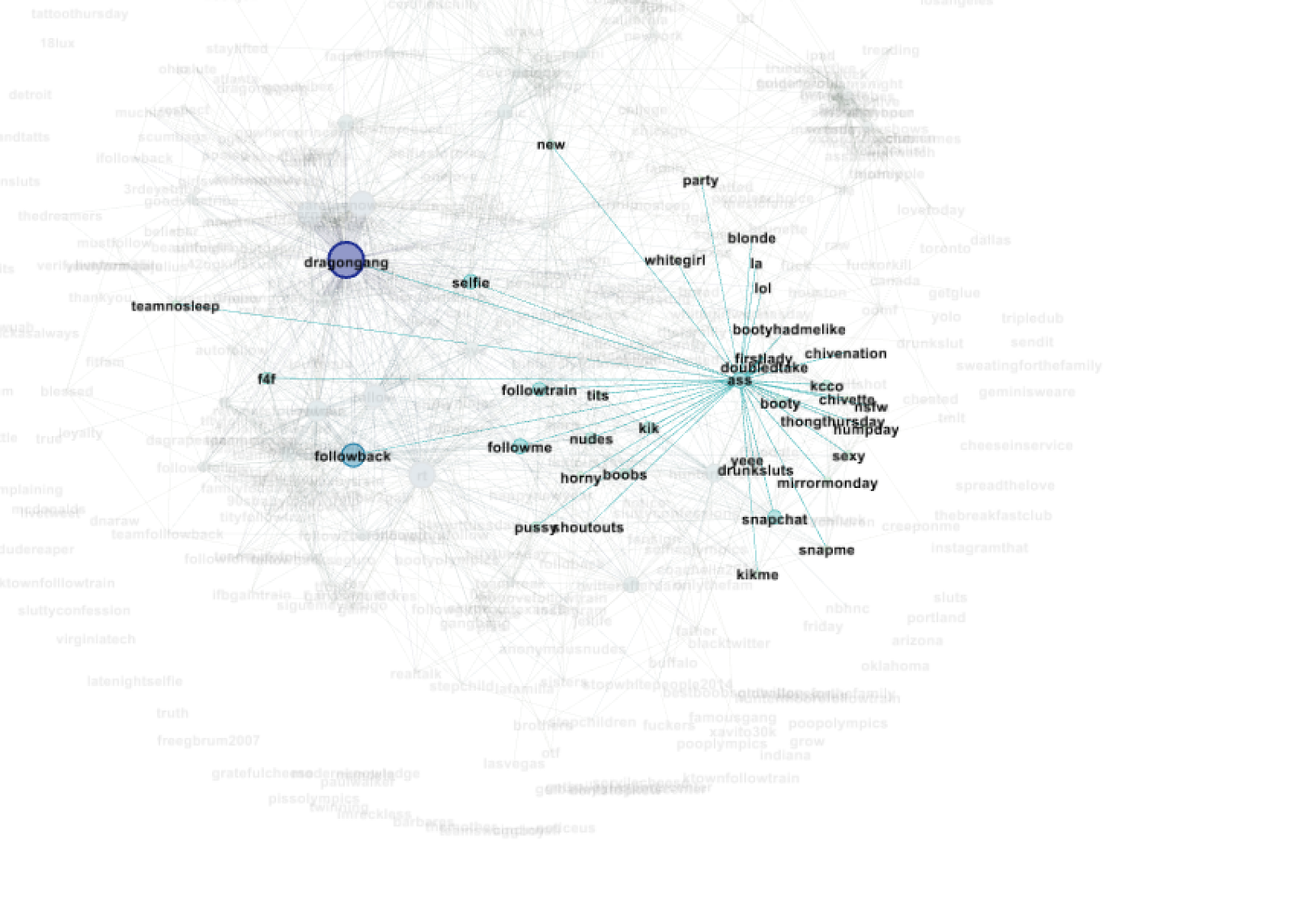 Next we mapped the visual content (images and videos) in this space with the visualisation software ImagePlot. In the case of videos we took one screenshot per video. The resulting 67 images from the 340 URLs shared in this network were uploaded to ImagePlot. They were mapped using two sets of variables: color saturation and brightness in order to explore the aesthetics of the collection through their formal qualities, and saturation and number of retweets per image to obtain a hierarchy of the images with a distribution on their formal qualities. The first visualization depicts two types of groups: one where female bodies and mild nudity and one with male bodies who engage in the so called assignments. The first group has warmer colors and take place mostly in doors while the second group has colder colors, includes professionally produced images appropriated by users and take place often in public spaces. Below is the result of this visualisation which groups images by colour saturation and brightness. 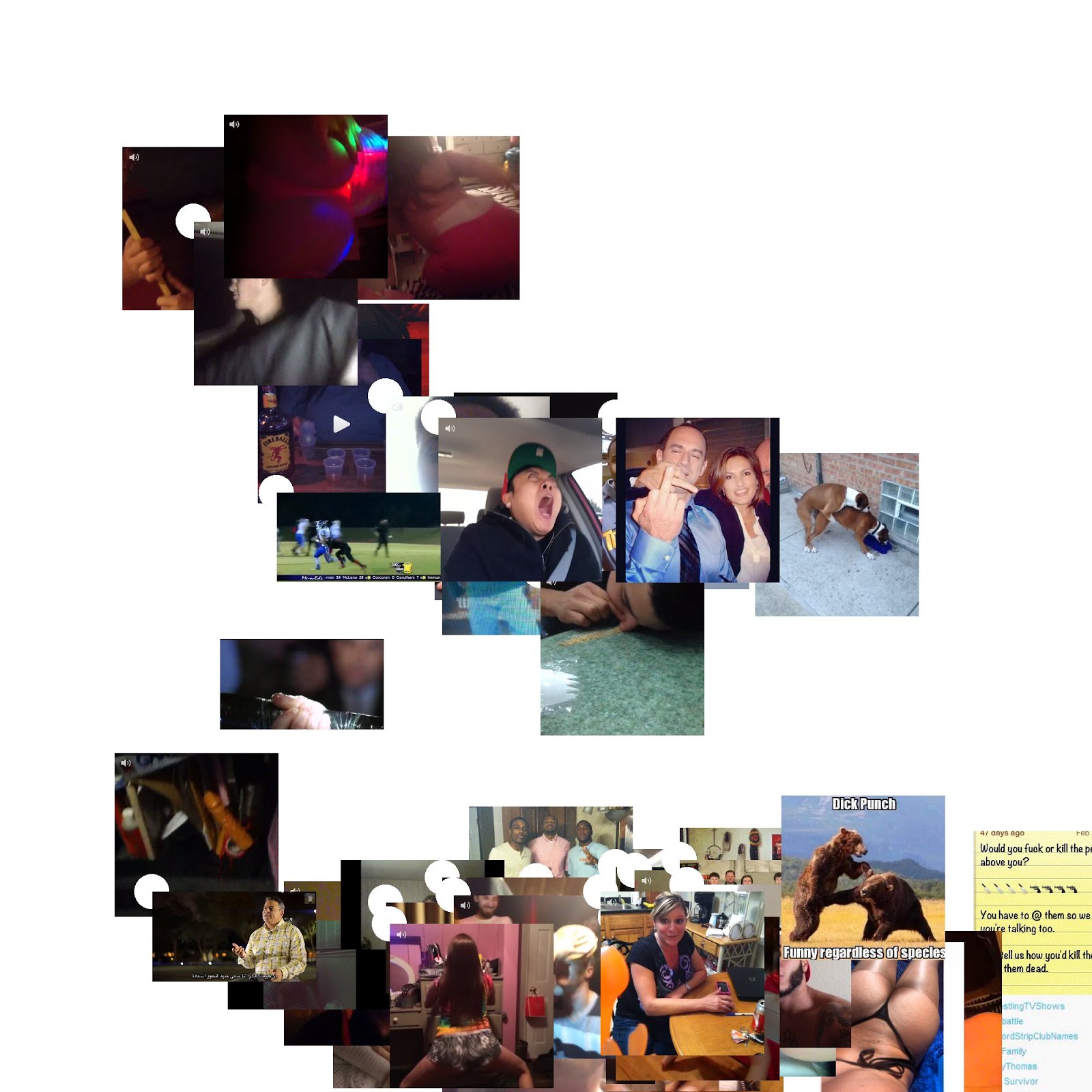 The second mapping exercise includes the number of retweets. The most popular images using this metric are those that document tasks or pranks, including one with someone jumping naked on the snow and a teenager setting his pubic hair on fire. Also popular was a screenshot that shows the hashtag #thefamily trending and one with a girl taking revenge by spitting on someones food and reaffirming the power and unity of the family. To our surprise it was not the explicit or nude pictures of young women which circulated the most, as could be expected given the character of the leader of the group and the frequent sexual nature of the tasks. The content that circulates the most was related to the network itself and therefore it reaffirms our previous findings regarding network performativity. 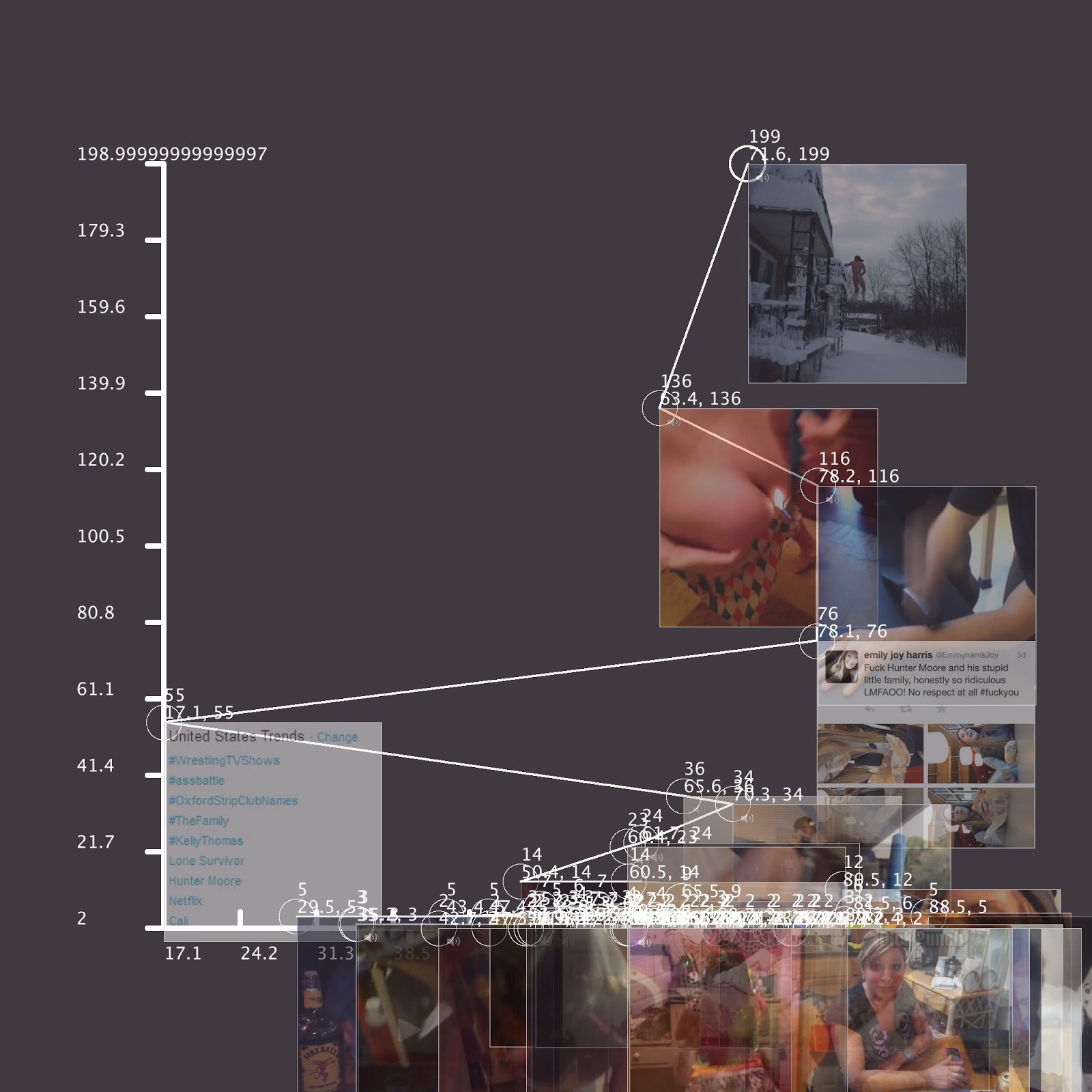 Finally, we viewed each piece of retweeted photographic and video media content and manually coded it using an emergent coding scheme. After removing false positives for users who seemed to use #TheFamily hashtag differently, the results were as follows:

38 pieces of media content were humor based, 24 of which involved forms of pain and humiliation.

We set out to grasp the explicit nature of the images circulated in the #thefamily network, because they received a lot of attention. The popular press understands them as the primary output of this group. Based on the history of the groups leader, his language on Twitter, and some of the pictures we saw we could see why: they are at times profoundly disturbing and baffling. As suspected, there is not any revenge porn, but there still is a lot of sexual content, also of underaged girls. Why would you exploit yourself and your loved ones? However uncanny, we assumed these acts contributed to the cohesion of the network.

For the majority of the members, the benefits of joining the network consists of precisely that: being a member of a online network. As the most retweeted message shows, Hunter Moore prescribes to also follow other members, which results in members having as much followers as they are following others. The majority of the content shared in the network is in fact not of explicit sexual nature, but network related. Thus, the glue of the network is not explicit content as discussed in popular press but the network acts.

Responsibility for the distribution of a particular image is also difficult to locate within this Twitter network as there is no central person or domain owner to blame. Each person retweeting an image of which there are often many, contribute to its proliferation, dispersing responsibility. In contrast to his infamous website, Hunter Moore has now created a elusive network for his activities that protect him legally.

Users who were retweeting or tweeting the most using the word the family or hashtag #thefamily did not necessarily have the most or many followers. Many had less than 500 even if they have contributed over 100 tweets over the period of 9 days mentioning thefamily. Some users within the smallest percentage of highly active users tweeting 300 - 600 times had less than 300 followers.

The most mentioned user is Hunter Moore with 54,012 mentions. There is not much correlation between top mentions and top tweets except for the user: edmislife00 who has the most tweets, 695 tweets and 1,908 mentions. This user makes up .55 percent of 124,189 tweets in the dataset. The user is male and has 6,798 followers, his account mainly retweets tweets by thefamily.

We also did not follow the account of @huntermoore or users who tweeted @huntermoore without using the word or hashtag #thefamily. Hunter Moore himself does not always use the hashtag. Potentially there are more images being tweeted at Hunter Moore. We did not include his account in this study because it would also include many people criticising Hunter Moore himself rather than being a part of the family. The Image Plotting tool was of limited use in this study because it detects color and saturation not content. In this case it might have been of more use to use a group of people and a set of standards to rate explicitness.

Moore, Hunter (huntermoore). k remember to cap your fucking follows. REPORT ALL UNFOLLOWERS as #stepchildren w/ @ and block them. #thefamily is for meeting eachother 13 Jan. 2014b, 6:41 a.m. Tweet.