You are here: Foswiki>Dmi Web>ToolDatabase>ToolIssueGeographer>ToolIssueGeographerSampleProject (14 Dec 2008, RichardRogers)Edit Attach
The A2K, or access to knowledge, movement comprises an array of civil society organizations and academics, and is concerned with easing the means by which knowledge may be circulated between legal regimes. Prior to the A2K conference at Yale in April 2007, the question arose about the composition of the movement. How global is it? How may one characterize the distribution of northern and southern organizations. The list of organizations involved in the movement was supplied by one of the participants at the conference. The organizations were entered into the Issuecrawler, and co-link analysis was performed. The resulting map showed the dominance of particularly U.S.-based organizations. Here is a rank list of actors in the A2K issue network, per April 2007, with the ranking based on inlink count from network? Top 10 Actors per inlink count
1 - creativecommons.org - 57
2 - eff.org - 48
3 - cptech.org - 34
4 - epic.org - 28
5 - lessig.org - 26
6 - aclu.org - 26
7 - gnu.org - 25
8 - icann.org - 25
9 - wipo.int - 23
10 - cdt.org - 23 The Issuegeographer visualizes the places of actors, that is, the locations of the organizations in the network. The A2K movement appears to be largely a 'northern' movement, with a smattering of representatives from the south. 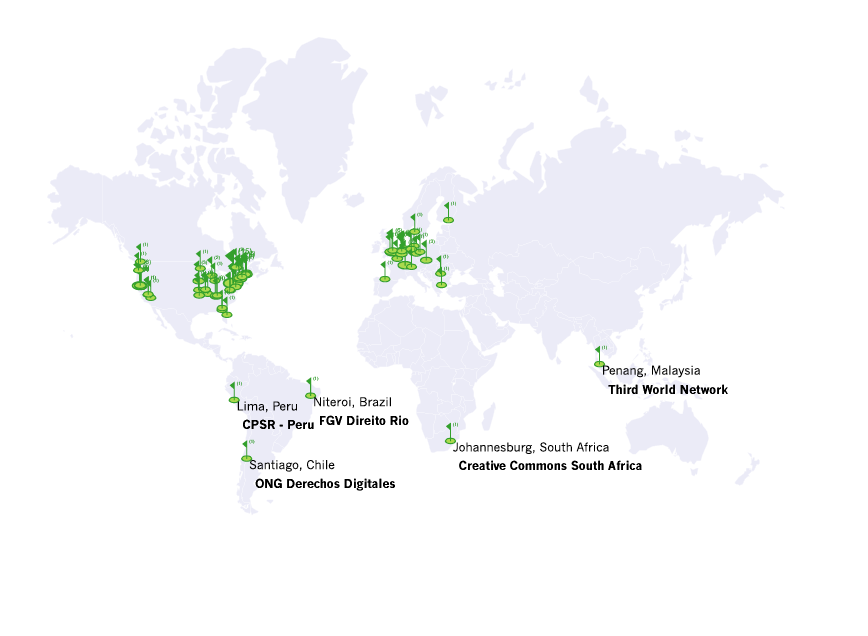