Warsan Shire is feminist, Somali-British poet who writes on issues of black womanhood and migration. She became viral when she was quoted by Beyonce in the album Lemonade (27th April). In this sub-project, we try to understand what kind of issues and actors Warsan Shire’s poetry is connected to through Social Media. The YouTube platform was chosen on the basis that Somali-British diaspora is very active on YouTube and we could take a more user-oriented approach to this sub-project and understand how users and/or viewers of Somali channels/videos engage with Warsan Shire’s poetry on this platform.

What are the issues and actors Warsan Shire’s poetry linked on the platform YouTube?

Starting with two videos from the SheekoSheeko channel on YouTube discussing Warzan Shire’s poetry a YouTube video network is created with the YouTube Video Network Tool. This tool creates a network file where nodes are the videos in the “Related Video / Up Next “ feature on the YouTube platform. The list is ranked, and the network edges are given weights based on this ranking. The tool supports crawl depths for a wider network, but we kept to the standard 1 crawl depth. The result is that every node in the network is connected to one of the seeds used.

The second dataset is generated with the same tool and settings. However the seeds are found by using the Video List feature of the YouTube Data Tool. The video list is generated by using the query “Warzan Shire”, iterations are set to 1. The results are then ranked by viewCount and the video IDs of the 15 most viewed videos (out of the 50 returned) are used as seeds in the Video Network Tool, crawl depth still at 1.

The videos from the SheekoSheeko channel used as seeds in the first network is also among the 15 used for the second network.

Both networks are then put into Gephi for visual network analysis. Here they are given similar treatment with the Force Atlas 2 algorithm to spatialize the networks, and the Modularity Index algorithm to find neighborhoods beyond those clearly visible through the spatialisation.

Network 1 uses Force Atlas 2 with linlog and prevent overlap options enabled and scaling and gravity set to 1.0. Network 1 has 113 Nodes (videos) and 1672 edges.

Nodes are colored according to Modularity Index, and sized by viewCount. 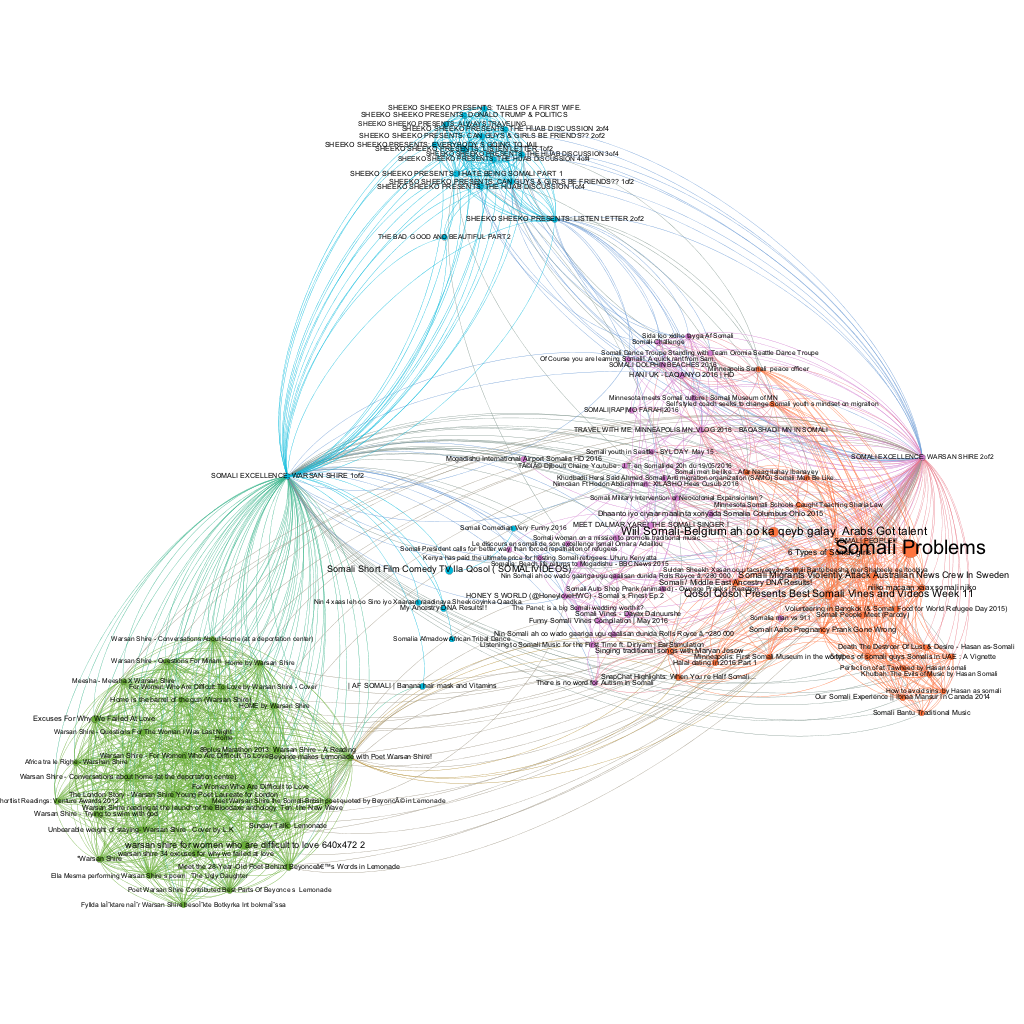 The Somali diaspora community is the biggest diaspora community online and it is not surprising that the main authorities of the orange cluster were independent YouTube channel owners who upload many numbers of videos and receive a large amount of views and comments. While SheekoSheeko was not central to this network, it was definitely connected to Warsan Shire’s poetry. Therefore the query on Warsan Shire’s videos on the Sheeko Sheeko network shows that Warsan Shire and her poetry were related to wide range of videos on issues related to Somali culture, entertainment, socio-political issues (in partiular race and gender), and poetry. The reason why SheekoSheeko is not central to this network may be because it is a London-based YouTube channel and other Somali diasporic communities in different parts of the world may not engage with the channel as much as with other channels. At the same time, it is noteworthy that users talk about Warsan Shire’s poetry and issues of immigration, womanhood and race when commenting Sheeko Sheeko’s video. These comments and references to Warsan Shire link the SheekoSheeko channel to the orange cluster that encompasses Social Media celebrities (mainly second generation of diaspora) and a wide range of issues from the UK and the US.

Network 2 was loaded into Gephi and spatialized using the Force Atlas 2 algorithm with linlog option enabled and with scaling 3.0 and gravity 2.0. Network 2 has 357 nodes (videos) and 6571 edges. To aid the visual analysis, the Modularity Index algorithm is used to identify neighborhoods. Standard settings were used. Nodes are colored according to Modularity Index, and sized by view count. 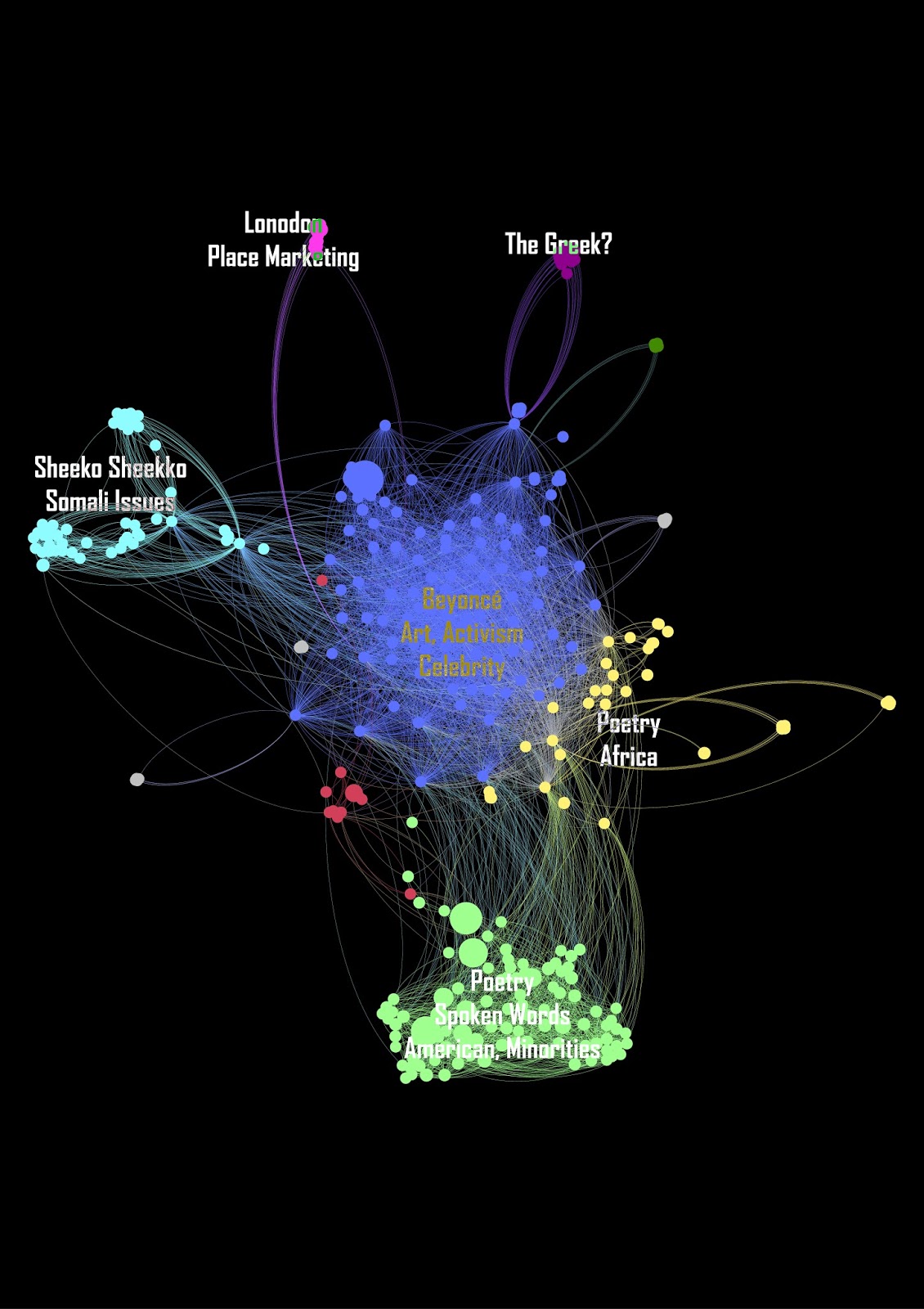 The central and largest component (blue color) is a very heterogeneous cluster. It contains a range of videos about Warsan Shire's persona, her work and history, many of them framed in the context of how Beyoncé used her poetry in her Lemonade album. The videos are published by a large mix of channels; from personal vlogs, other artists channel, through mainstream entertainment, fashion and celebrity focused channels to channels devoted to political/civic issues and activism. Beyoncé’s presence is very noticeable and the most viewed video is the trailer for the HBO Visual Album version of Lemonade. Several of Warsan Shire's poems are frequently disqussed. Particularly “Home” and “for women who are 'difficult' to love” are prominently featured.

To the left of this main component is a smaller teal-colored cluster, which is centered around the links to Somali issues in general and the SheekoSheeko channel in particular. The bridge to this network are the two videos from SheekoSheeko that were used as seeds in the first network. The two videos were both in the top 15 viewed videos and were thus used as seeds in both networks. There are many edges leading both to and from these two nodes (videos) connecting both the wider Somali/SheekoSheeko cluster and the main component.

Another big component located just below the main component and coloured in green, is relevant. It is a large network of videos with poetry, spoken word, and related content. It has a certain bias towards racial and minority actors as well as issues based on a North American context.

Between this green poetry cluster and the main component a community is detected with the Modularity algorithm that mostly contains videos published by a Library located in Rome, Italy (http://www.libreriagriot.it/). The library is devoted to African litterature and culture.

The two smaller clusters located above the main component are also noteworthy. The content of the cluster on the left (bright purple) is mostly about London and its tourism, the link to the main component goes through a video where Warsan Shire is used as part of a place marketing campaign effort by the city of London. The cluster to the right of this a bit of a conundrum, it is connected to the main component by a video containing Warsan Shire’s poetry read in Greek. It is however not yet clear what the content of this cluster is because no-one in our group spoke Greek. This link should be investigated further at a later stage.