Our intent is to examine representations of the Greek crisis on the internet. The web is more social than informational (Rogers, 2013, pp. 155-156). Rather than focusing on news channels and mainstream media representations of this issue, we focus on the spread of memes on various social media platforms.

This definition of memes does not tie the concept to images. Other forms of cultural information can pass from person to person, gradually scaling into a shared social phenomenon while being reproduced and diffused. While our data set included many images, we focused on hashtags to trace the reproduction and diffusion of Greek crisis memes.

It is interesting to see that the seed meme grexit has been adapted for different purposes and after performing a co-hashtag analysis on Twitter we could identify over 140 different variations.

The goal of our research was to answer the following questions

We had the ambitious goal to examine five different platforms. The traditional way we searched for is to search for Hashtags. However, we realized that hashtag-search is limited when applied to YouTube and Facebook. That is why we explored other type linkages between platforms, which leads us to our primary research question.

RQ1: How are different platforms inter-related?

RQ2: How can we study the relationship between platforms?

We extracted the URLs from each of the datasets and quantified the number of links pointing to the other platforms. In this graph, each node represents a platform. As shown in the figure below, the big blue curve indicates Instagram links found on Twitter.

The size of the nodes relates to the number of in-degrees. Nodes for Tumblr and Instagram are really small; that corresponds what we previously found, which means they primarily feeders. In contrast, Facebook and Twitter are much bigger nodes which indicates a lot of platforms are publishing their content to these platforms. The unexpected anomaly is the relationship between YouTube and Facebook. What we expected is that we would find a lot of links from YouTube on Facebook, but we were surprised about the number of links to Facebook on YouTube. 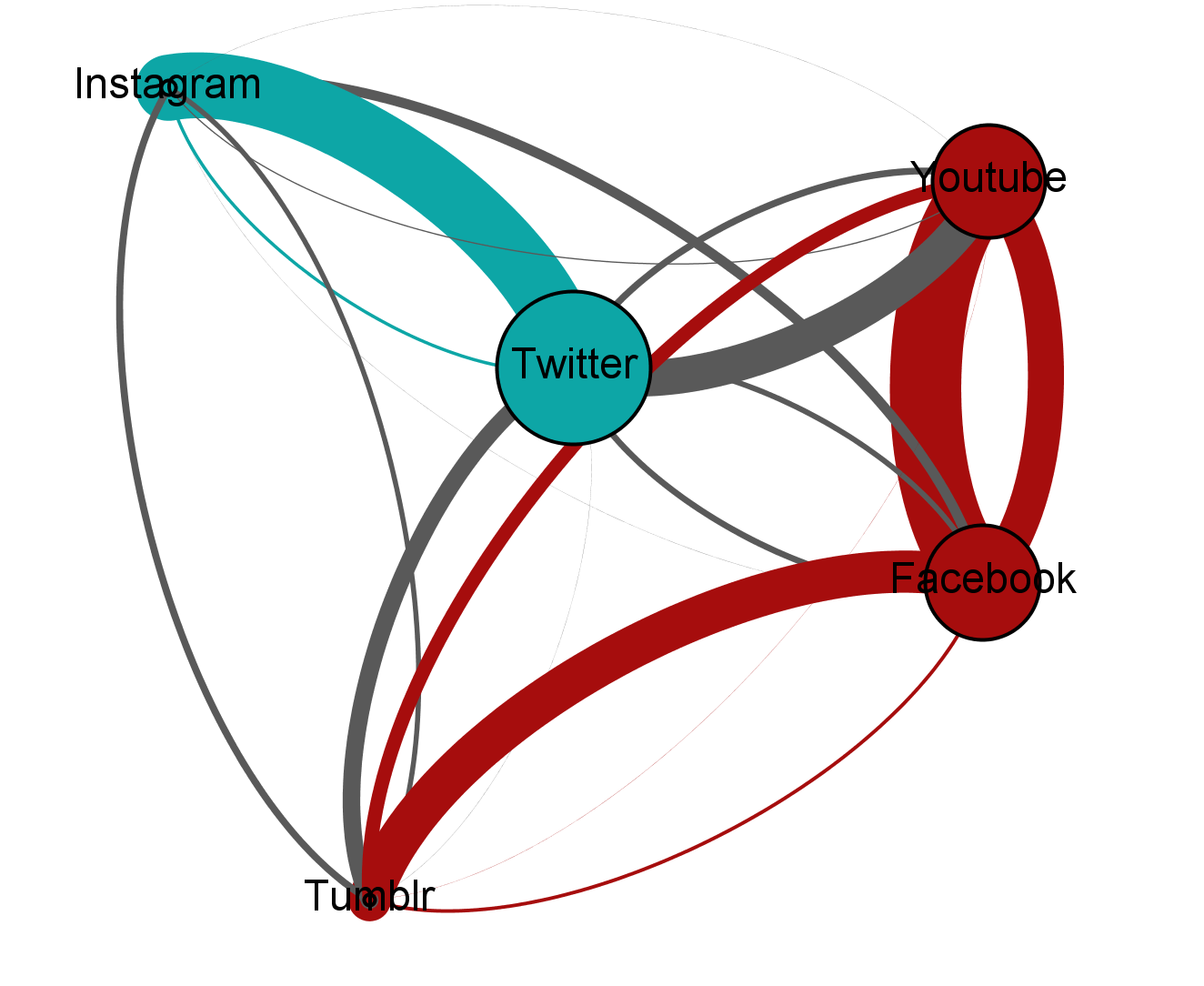 The second thing we looked at were so called Platform-Relevant Hashtags that we coined as Prashtags. Prashtags are hashtags that carry information about another platform. You see examples here, and we found them for all the platforms. Nevertheless, the Instagram ones were most prevalent. Platforms using Prashtags include the following: Instagram, Twitter, and Tumblr. Platforms most referred to by Prashtags include the following: Instagram, Twitter, YouTube.


As Gerlitz and Rieder (2013) note, The use practices of platform features on Twitter are, however, not solely produced by users themselves, but crystallise in relation to wider ecologies of platforms, users, other media, and third party services (Burgess and Bruns), allowing for sometimes unanticipated vectors of development. They cite the development of the Twitter retweet button as an example of user practice influencing platform development. In the case of prashtags, user practice textually connects platforms by correlating them with referent hashtags. 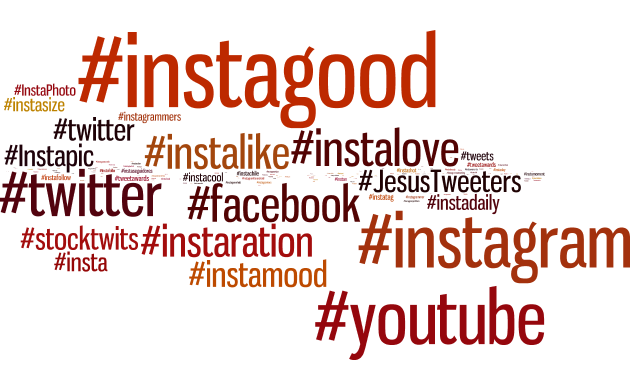 Some of the APIs allow you to retrieve the source platform of a post. We looked at the tweets in our dataset that originated from one of the other four platforms that we studied. We can see that relative to the other platforms, most tweets originated in Tumblr. 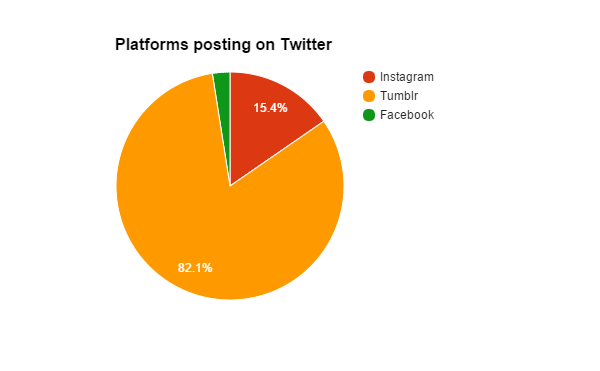 RQ3 How does the seed meme #grexit diffuse across platforms and between countries?

We conducted four different analyses. As you can see, some forms of analysis were limited to certain platforms. 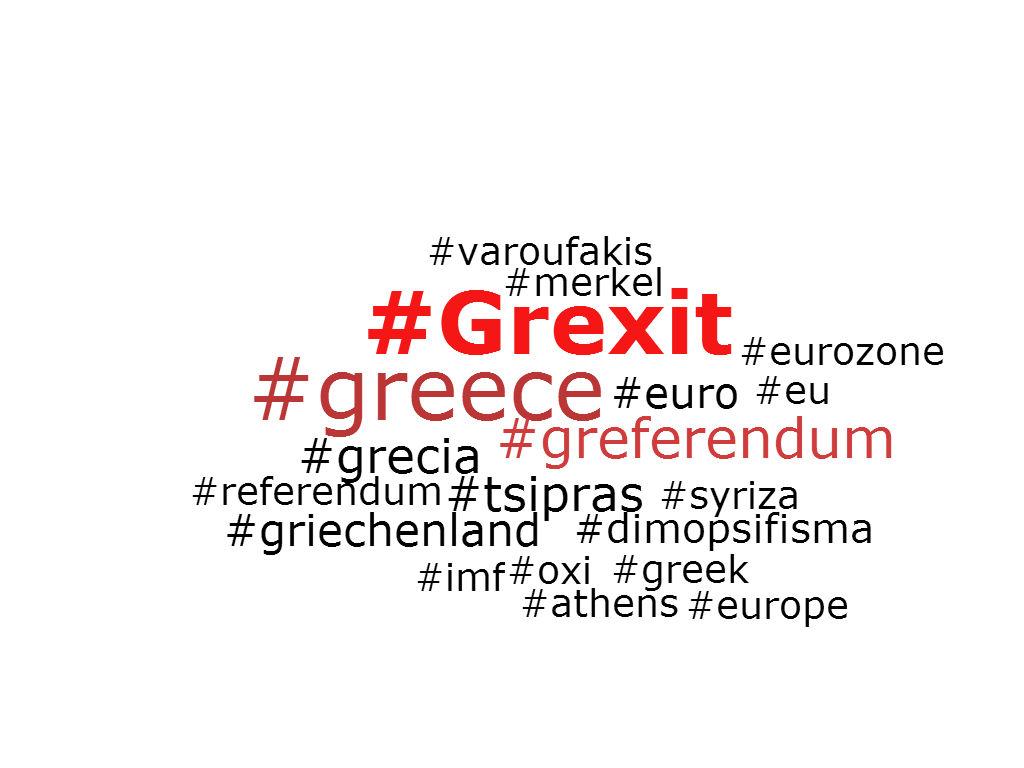 Next, we used location. We made a list of nine different ways to derive locations from posts and evaluated them for each platform. Of course, using GPS tags is the most accurate but not all platforms support this.

We then generated heatmaps using google maps API to identify areas where the issue was being discussed.#grexit in Europe 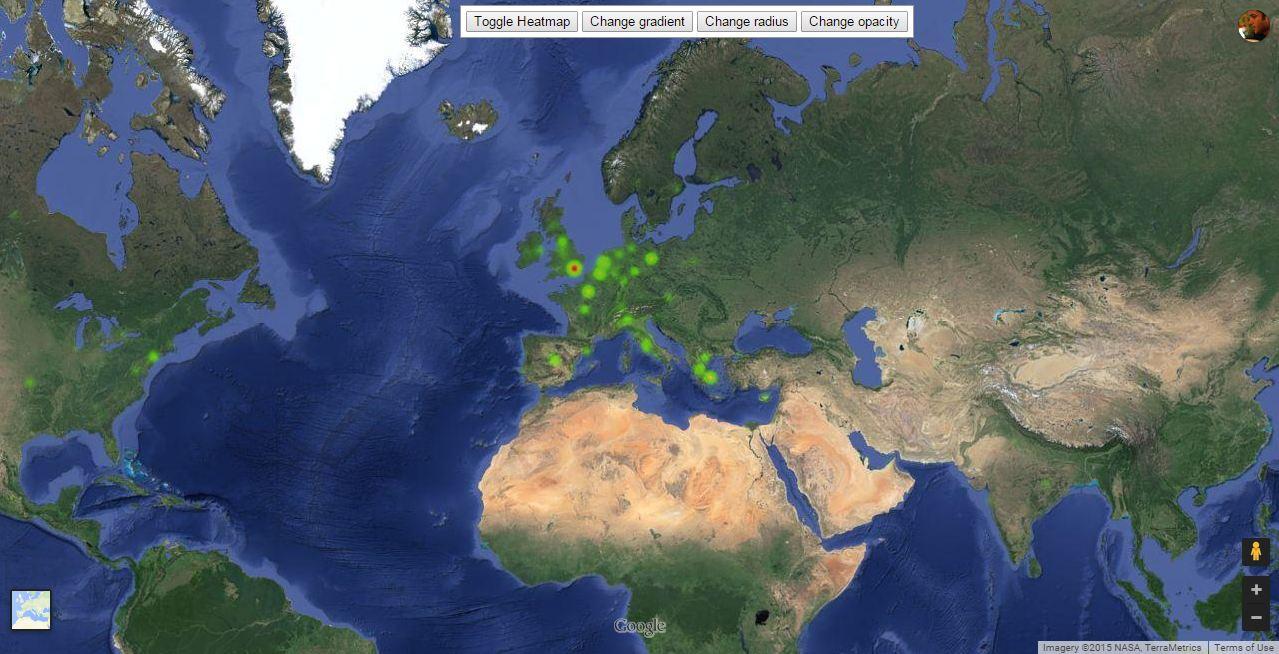 In the Twitter discussion we can see a hotspot in Britain, whereas the actual event is taking place in Greece. 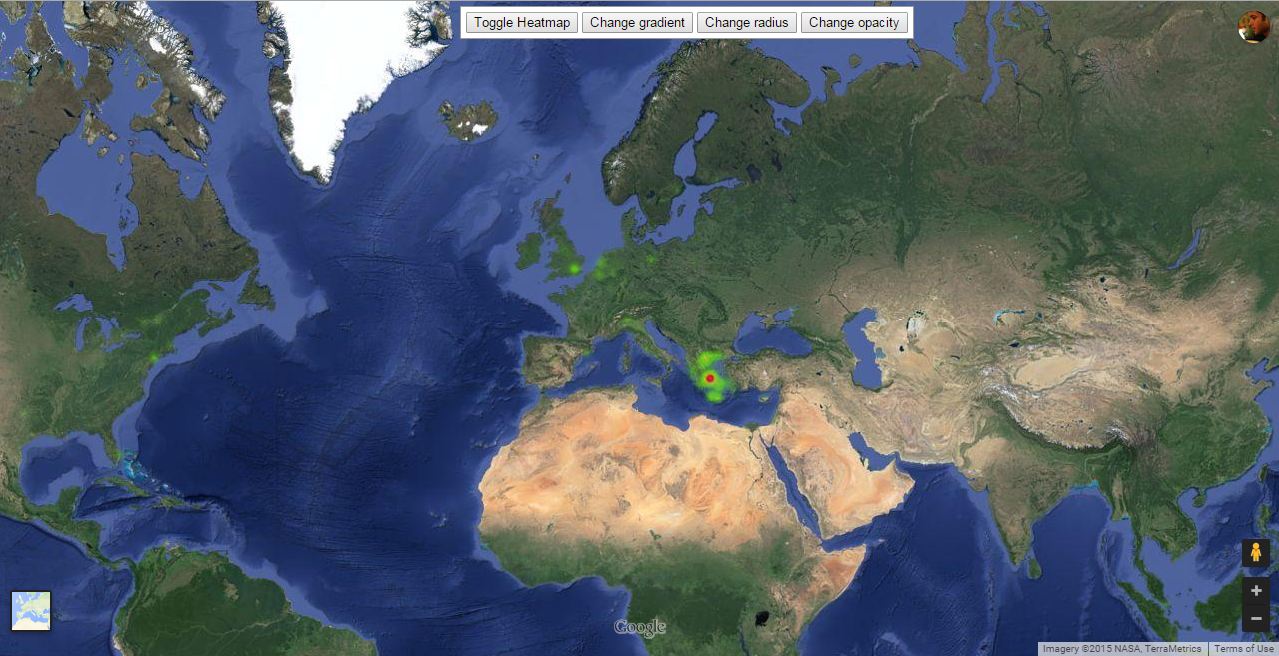 If we look at the oppositional hashtag, we can observe a lot of activity in Germany. While on Instagram the #NoGrexit activity is focused within Greece. 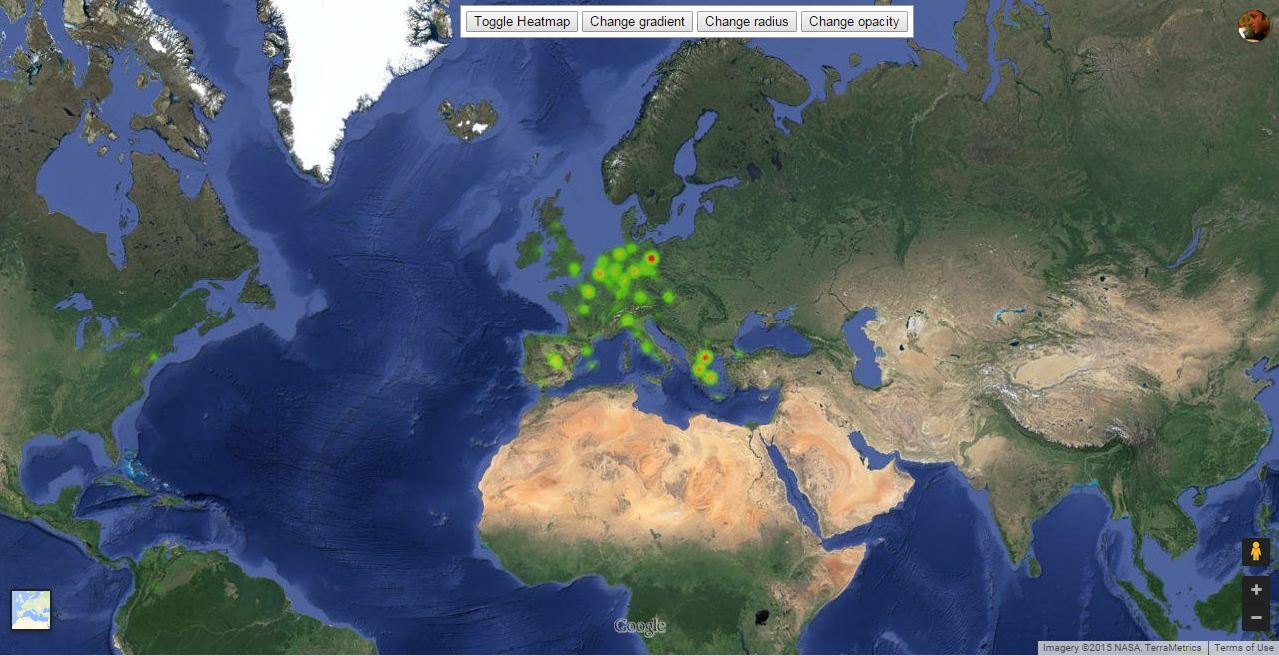 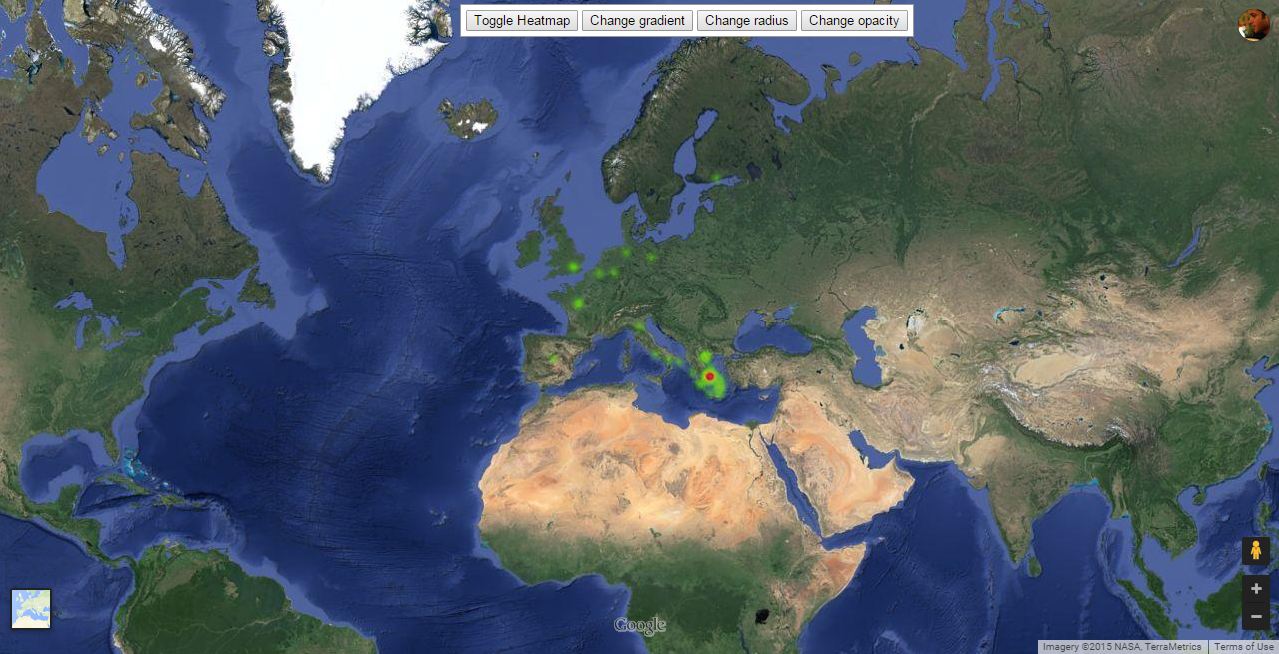 Not surprisingly, we see #Brexit has been trending in Britain. On Instagram we can see that Brexit is also trending in Denmark, which possibly highlights Denmarks EU skepticism. 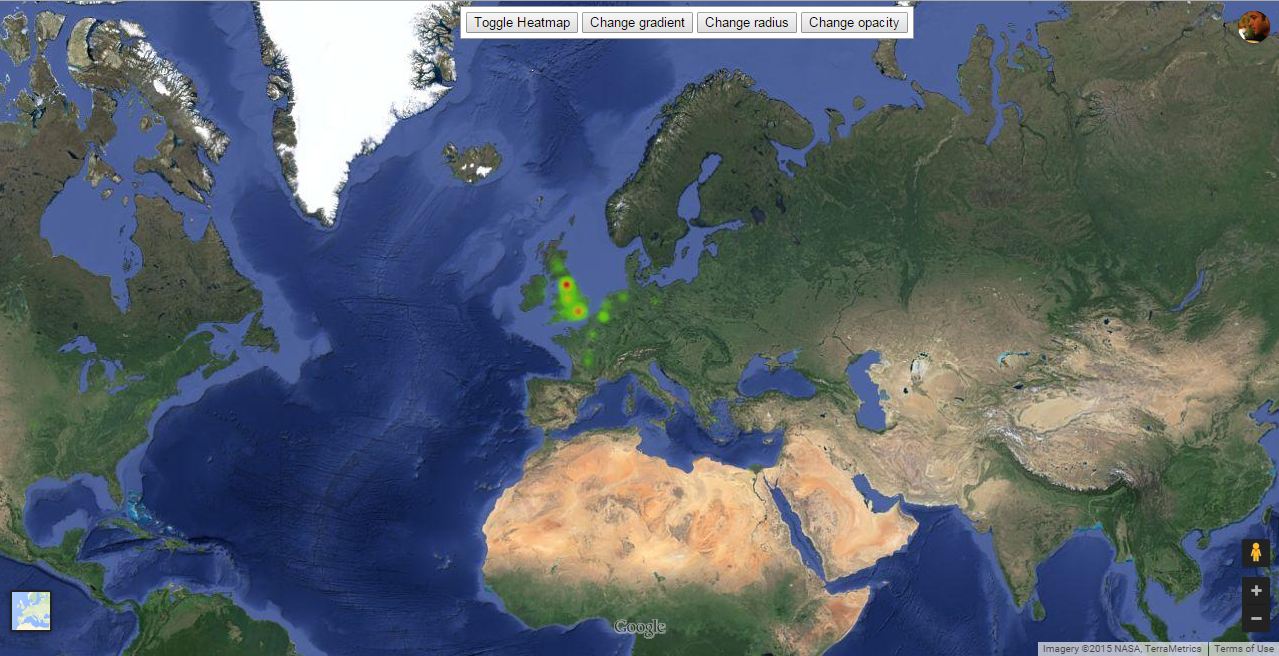 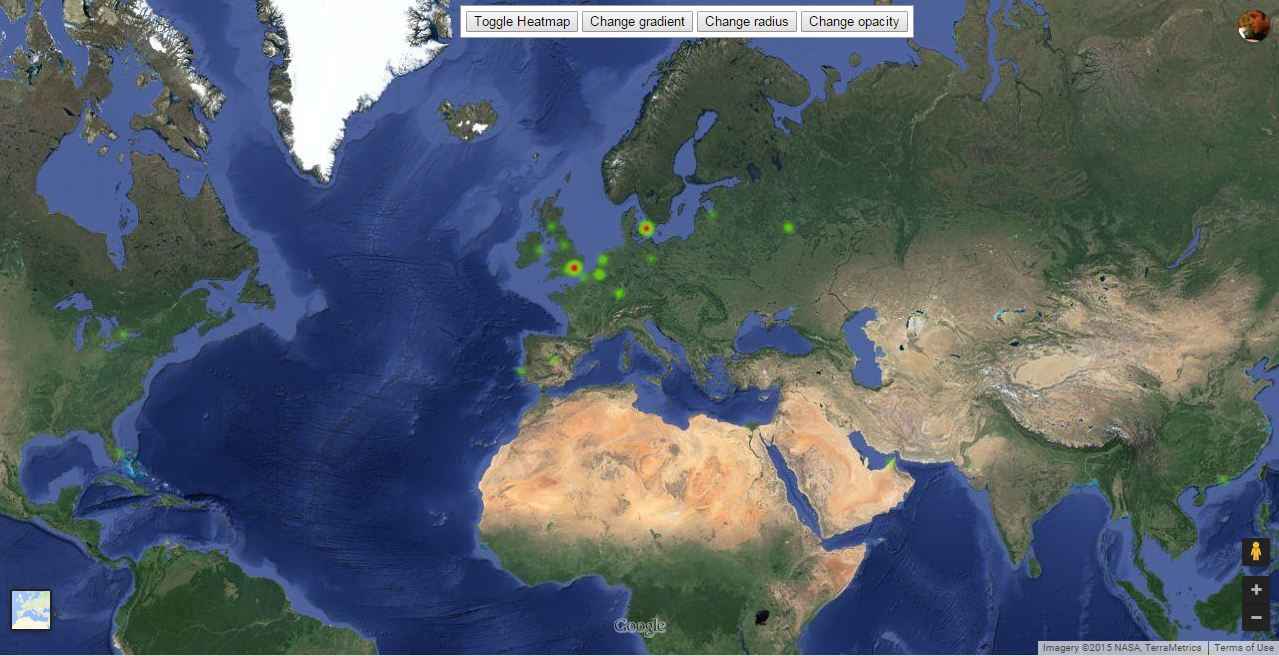 The heat maps highlight that platforms and national contexts are closely related to each other.

Next we looked at Images. We could retrieve Images from Instagram and Tumblr. Here we plotted the images retrieved from Instagram chronologically. The gaps in between the groups indicate when Europe was sleeping. We can observe an increase of images, over the time. 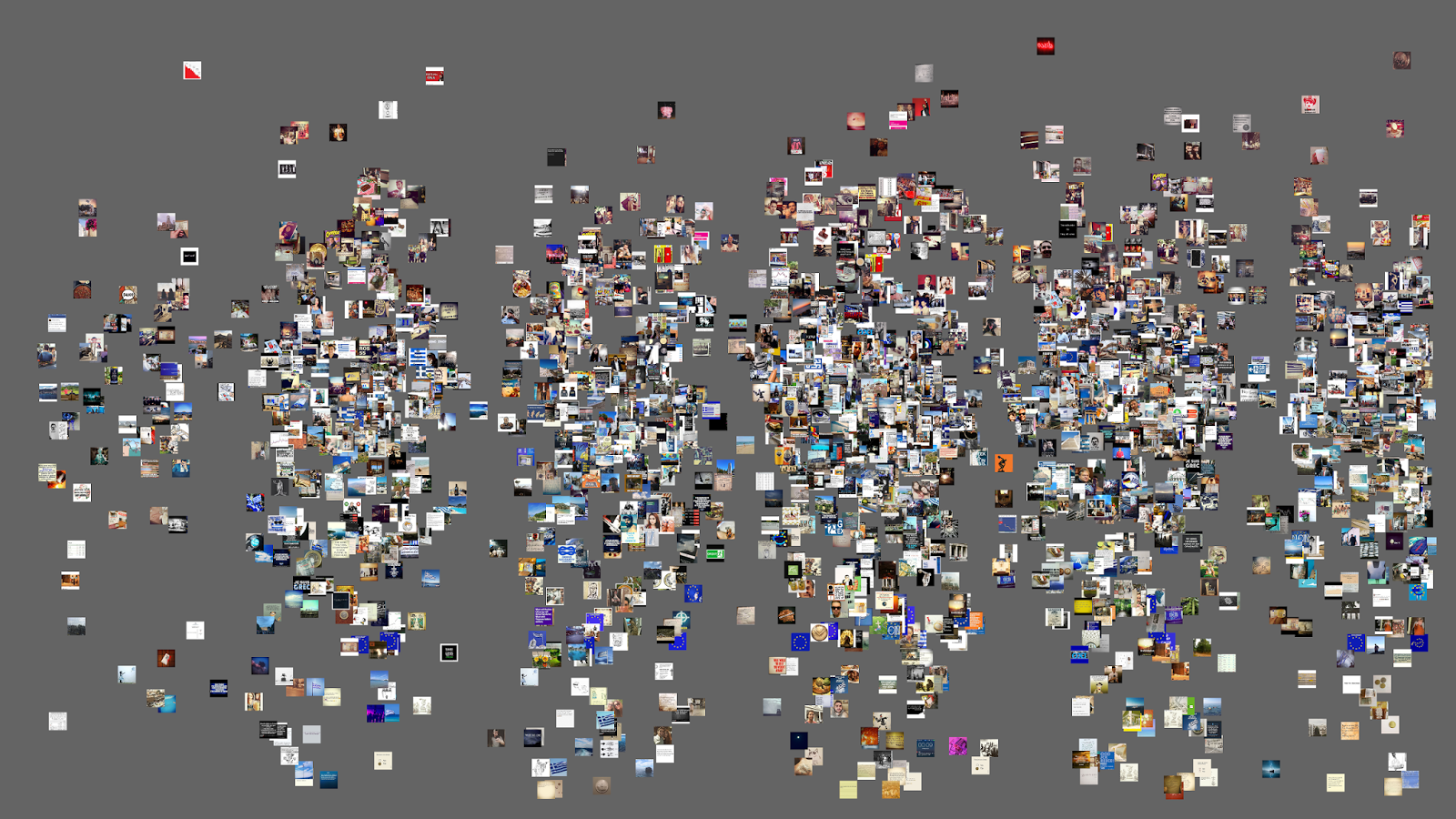 On Tumblr we found fewer images tagged with #grexit, but we could observe an increase in the frequency. 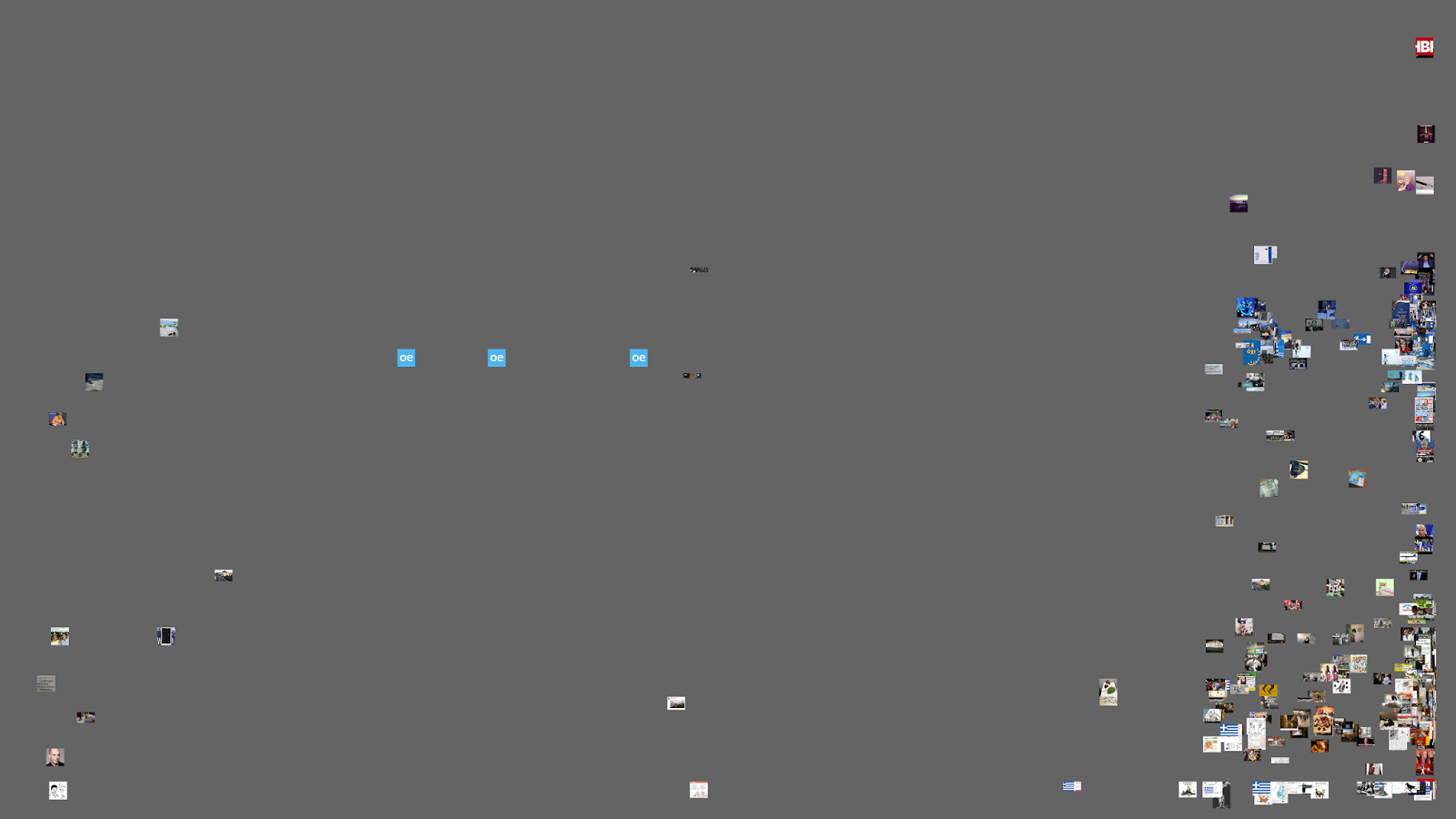 In a last step, we looked at the number of posts, over time. This was the only analysis we could do across all of the platforms.

When retrieving data from different platforms, we realized that the data sets covers different time frames. For some we could go back to 2012. For Twitter we could just go back three days until we hit the limits. The following chart represents data was retrieved 1 July 2015. 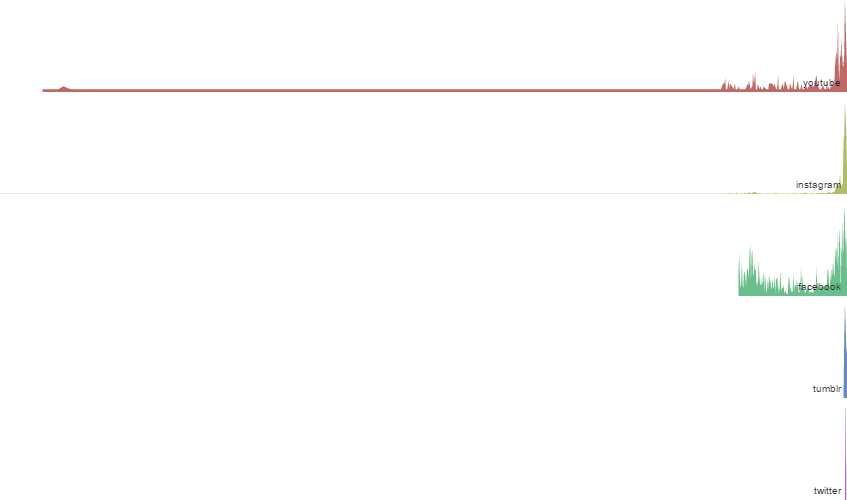 If we focus on the last one month. We should be careful while interpreting this data because what looks like a peak might due to a tool hitting an APIs threshold. The following chart focuses on the month of June in our data set. 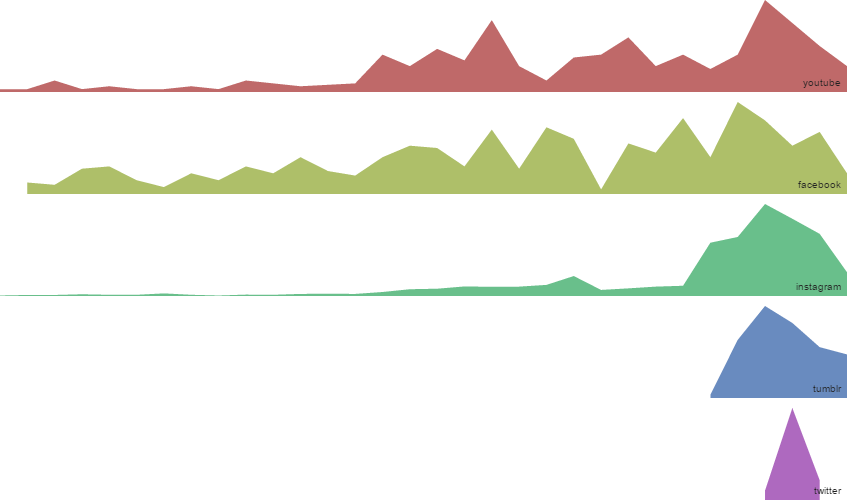 Our conclusions are two-fold as they group into findings related to Cross-Platform Analysis in general and findings specific to the grexit dataset.

We explored the relations between different platforms and found that some platforms actively support the posting of content to other platforms while others do not. By mapping supported relations, we could see that what we call secondary media platforms (Youtube, Instagram, Tumblr) tend to feed content to the primary platforms (Twitter, Facebook).

When working with datasets from different platforms one has to keep in mind the bias introduced by the rate-limits of the respective APIs.

Our cross-platform analysis revealed that instagram posts with hashtag grexit were mainly originating in Greece, while tweets primarily have been sent from western Europe. From the drastic difference in the geographic distribution we could conclude that the platform is tied to a geographical context, and it is indeed worth comparing different platforms when studying an issue.

In order to be able to derive generalizable statements about the linkage of the platforms, the three types of linkages should be assessed using a more comprehensive dataset. Furthermore, it would be interesting to explore how the linkages can be used to discover content across platforms, as an alternative to traditional hashtag and keyword search. 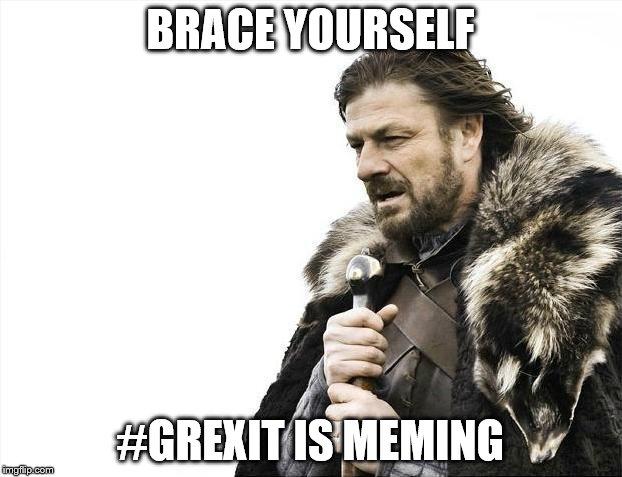 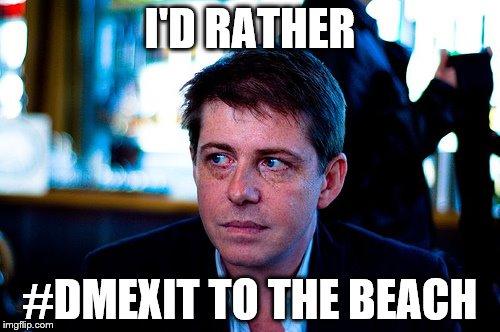