Does Love Win? The Mechanics of Memetics

This research investigates the online memetic mechanics within social media in relation to the recent Supreme Court Of The United States (SCOTUS) ruling on same-sex marriage on June 26th, 2015. The decision that prohibition of same-sex marriage by individual states is unconstitutional is a significant event on a national level, with global reach and implications. The reactions to this decision were immediately seen on social media platforms, most significantly with Facebook's 'Celebrate Pride' feature that overlays a rainbow on a user's profile picture, and the take up of the hashtag #lovewins following a tweet by Barack Obama:

Today is a big step in our march toward equality. Gay and lesbian couples now have the right to marry, just like anyone else. #LoveWins

We take the definition of an internet meme from Shifman (2014) as a starting point, and find that this group of digital items created in response to the event can be seen as: Our research aims to study the memetic character of the global and social perception of this event in the digital realm, and how the visual (rainbow images) and verbal (#lovewins) content are circulated, imitated, and transformed as expressions of support and counter-reactions to this ruling. Using this event as our case study, we ask: How do memes act as an expression of socio-political orientation in terms of support or counter-reaction? This research will be addressed through a methodological framework consisting of a cross-platform analysis of Facebook and Instagram. To analyze the data gathered, we performed a (qualitative) content analysis, mapping using locational metadata, and a visual analysis.

We aim to address the broad question: Can we trace patterns of viral flow/memetic engagement within and between countries and platforms? In this case we focus on memetic engagement as an expression of socio-political orientation for support (with #lovewins and the rainbow images) and counter-reaction i.e. the negative responses that transform the text (#___wins or #love___s) and images subverting the use of the rainbow. We propose the following sub-questions: In particular, we will compare the anti-meme with the original, to see if and how it successfully piggybacks on #lovewins, as more or less viral. We will also consider how memes and counter-reactions act as a form of community building, persuasion, or shaming, and to what degree they can cross borders and languages.

Our method consisted of a two main phases and focused on the comparison of social media platforms Facebook and Instagram. These were chosen in order to compare 'primary' and 'secondary' social media sites. The first phase of the method was exploratory, seeking out the discourse around the 'program' (pro-same sex marriage), and 'anti-program' (against same sex marriage). A co-hashtag analysis was performed for Instagram posts on #lovewins, as well as Facebook groups and pages for #lovewins and #celebratepride. The Instagram co-hashtag analysis was explored through a social network diagram using Gephi, and different clusters of counter-reactions were found. These included groupings with a strong religious focus (#godwins, #jesuswins), more overt hate-speech (#gayisnotok, #fagscantlove) as well as more general opposition (#loveloses). For the second phase, we narrowed our search to two program tags (#lovewins and #celebratepride) and two anti-program (#jesuswins and #redrevolution) - these same four tags were queried on both Instagram and Facebook. We scraped the posts, images, and metadata for these queries for a timeframe of June 24th, 2015 to July 1st, 2015, to capture the period just prior to and following the Supreme Court ruling. We then combined the entire data set, and analyzed everything based on three different approaches: qualitative content analysis, geo-locational mapping, and large-scale visual analysis. A combination of network graphs and manual queries was used to perform further qualitative content analysis of individual posts. On Instagram, the top 20 most liked pictures for each query were selected manually for two main reasons: First, not all the entries in the database we scraped included a date (so the date had to be verified by visiting the Instagram website) and hashtags like #jesuswins are used in other contexts as well, so each entry had to be identified as a comment on #lovewins. The qualitative analysis of the top 20 #jesuswins posts that were within our timeframe and commented on #lovewins revealed a new anti-program: #redrevolution, which was queried via the Instagram scraper and the top 20 most liked pictures were selected manually again.

For the posts gathered from Instagram that included locational data, these were mapped using longitude and latitude. While this included only a small portion of the entire set (32.08% or 7,263 posts), it was possible to reveal the different regions and locations for both the program and anti-program hashtags, as well as the more religious (#jesuswins) and non-religious (#loveloses) posts within the anti-program.

To perform a visual analysis of the image set as a whole we used the ImagePlot tool developed by the Software Studies Initiative. This allowed us to aggregate and arrange thumbnail images in order to find visual patterns. The images collected for the program and anti-program were compared, as each was plotted based on median saturation (intensity of colour) and median hue (RGB value from 0-255).

As a general finding, it was difficult to capture the use and spread of the meme on Facebook with the available Netvizz tools, since we could only view and gather data from specific groups and pages, whereas the way the rainbow profile picture circulated was among friend networks. Therefore, in the data available in our set, the meme and anti-meme didnt cross paths in specific places (not on groups or pages) whereas on Instagram the support and counter-reaction crossed paths as the anti-meme posts often also specifically reference #lovewins.

Investigating the hashtags around the program, we analyzed the top 20 most liked Instagram posts in greater detail. Interestingly the most liked (and also commented) #lovewins photo on Instagram is a kind of reaffirmation of religion: the picture with the hand is saying that gay marriage is not against religion, but that religion is about love first. There were also many posts supporting or celebrating the cause. In some cases people were also defending same-sex marriage against more religious groups. 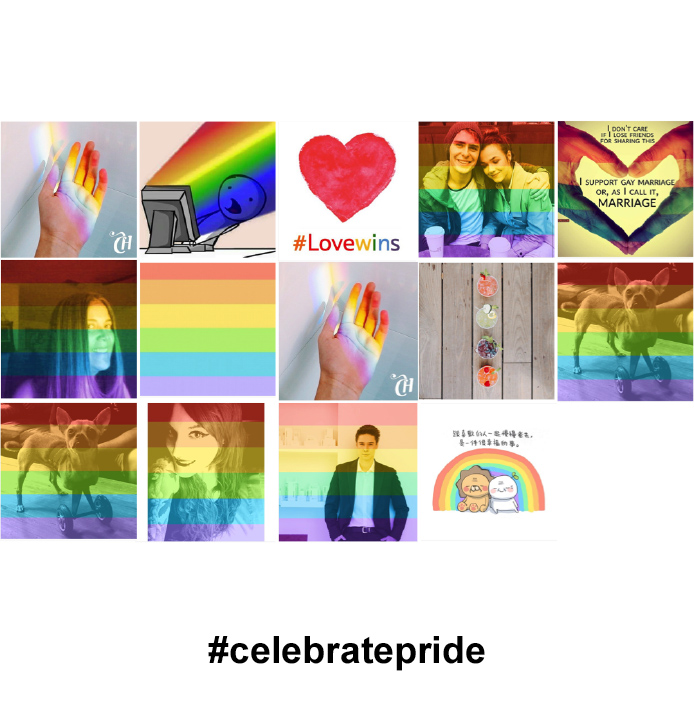 For the anti-program, we divided the negative reactions on Instagram into two categories. First, there were a lot of reactions that are religious in a broad sense: pictures of Bible quotes with the statement that love won when Jesus died, or that Gods law is different from mens law. Interestingly, the majority of these responses would not qualify as memetic since they do not use similar images or use exactly the same quote in different variations. The hashtag #redrevolution was a religious response as well, but here we have clear memetic pattern: an image of a cross on a red background overlaid on individual profile pictures. This can be seen as a direct reaction to the rainbow profile pictures of the #lovewins meme, following the same kind of visual memetic logic. 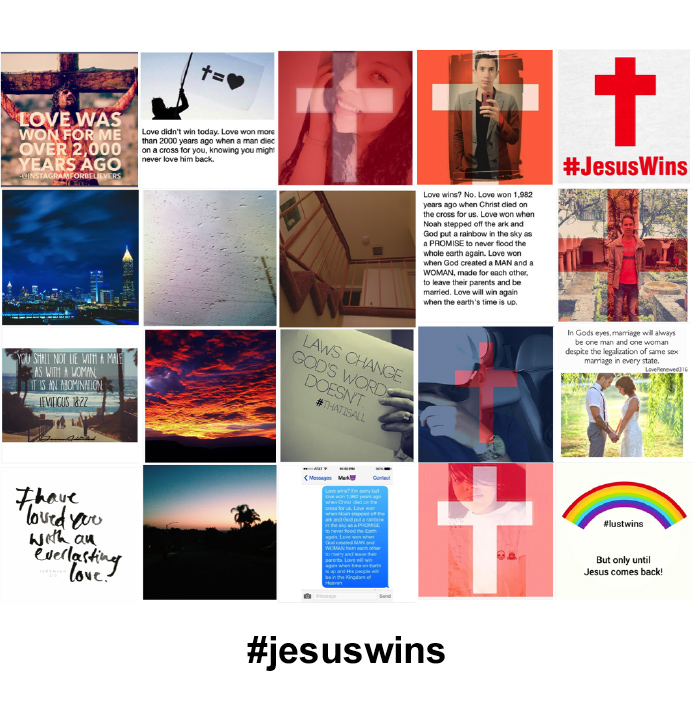 We mapped the #lovewins reaction posts on Instagram, separating posts from each of the days from June 26 to July 1. This shows how the centre of the event is clearly within the United States and the reactions spread out over time to the rest of the world, making this a global political debate.

A second mapping also shows the locations of individual posts, separated for the program and anti-program hashtags. The anti-program were further distinguished into the religious and non-religious groupings. 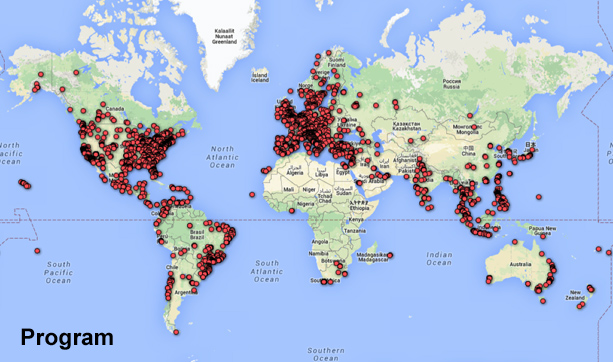 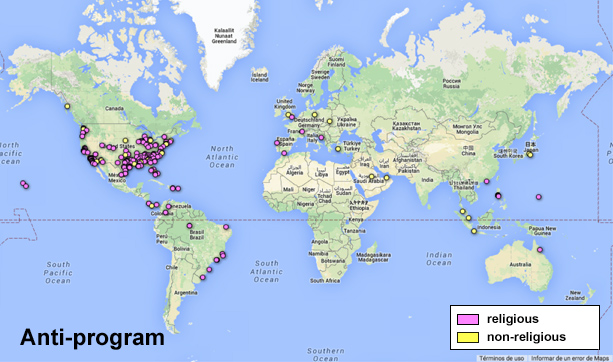 Using Imageplot for a visual analysis also revealed some clear distinctions between the program and anti-program. In particular, the clusters of #redrevolution images were visible in the Imageplot results of the anti-program, supporting or triangulating the results of the more detailed content analysis of the top 20 posts. 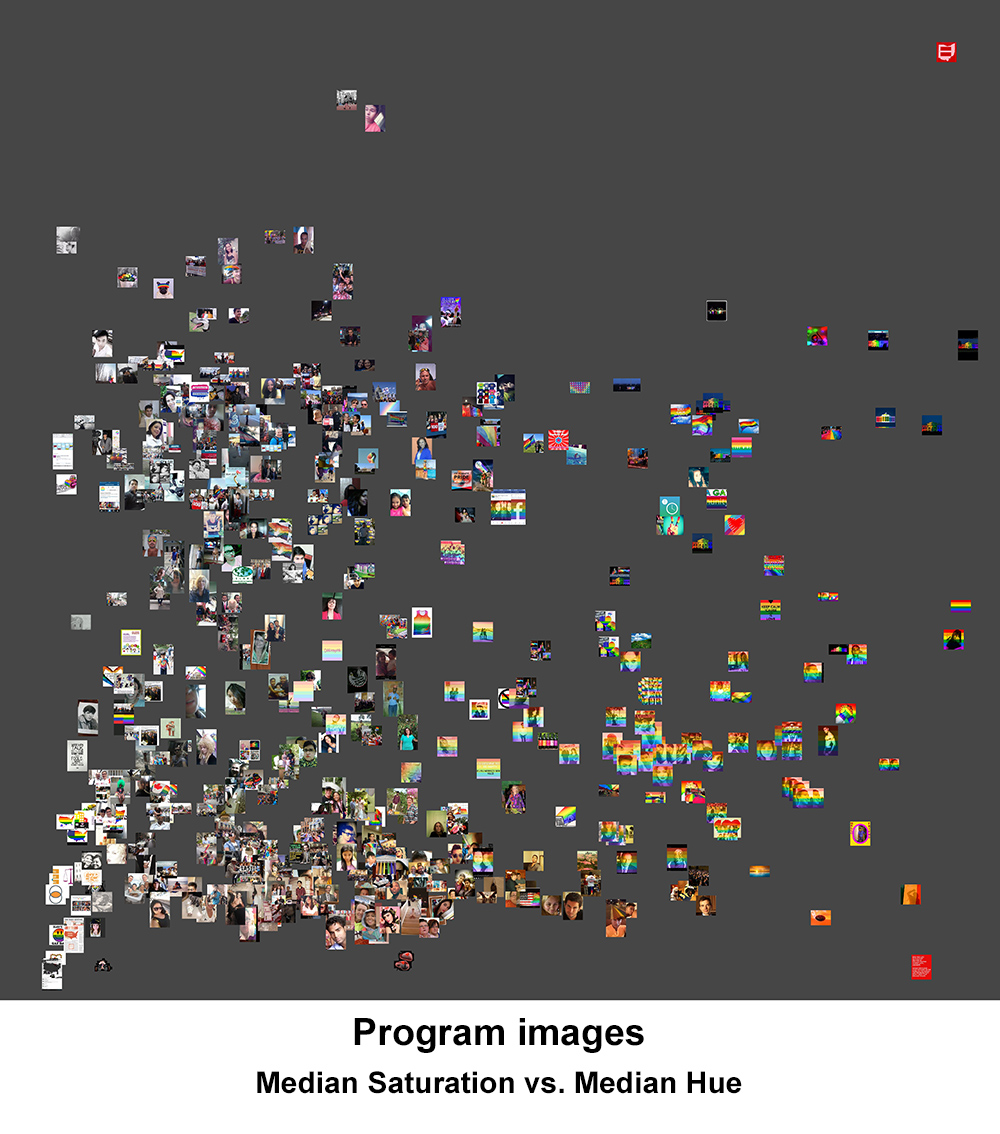 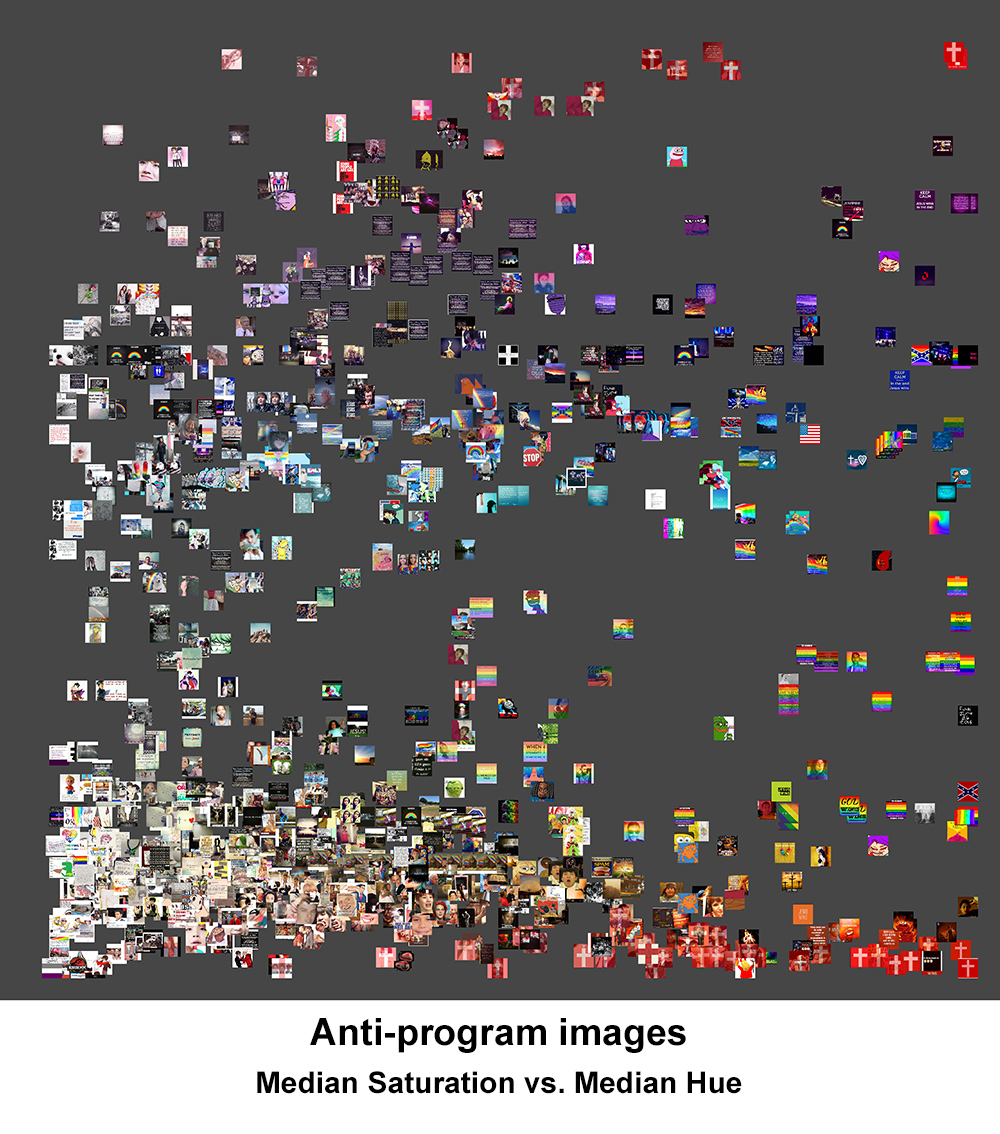 The #lovewins case revealed interesting findings regarding the spread and evolution of memes. Memetic reactions start from pre-existing cultural units. This includes the ways that they spread based on existing groupings (friendship networks on Facebook and The visual elements of both #lovewins and #redrevolution reactions drew on existing iconography of rainbows to symbolize pride, and the red cross as a symbol of Christian values of traditional marriage. Medium specific elements constitute the mechanics of memetics. In our case, the different platforms or mediums allow for different expressions of socio-political orientation such as: The use of hashtags on Instagram (and Twitter, though not our focus here) allowed the counter-reactions of the anti-program responses to overlap with the discussions of the program, while simultaneously responding and subverting the hashtags originally used. The visual elements of the responses similarly enabled spreading through imitation and subversion, but the medium-specific element of the profile pic filter on Facebook gains much more exposure than a singular post that is shared/reposted, as the profile pic is hierarchically a more visible element within the platforms structure. Therefore these specificities make an impactful difference in terms of online engagement, and the viral or memetic mechanics warrant further comparison across platforms. Since we began our study by collecting data based on the hashtags, further studies on tracking the evolution of memes might begin with the analysis and clustering of images to find visual patterns, and see if similar hashtags can be found to identify correlations between images. Future research might also include user studies, for example to investigate the notion of solidarity among users who changed their profile pictures, or other motivations for propagating a meme.

Based on our case study it becomes clear that memes are capable of acting as an expression of socio-political orientation in terms of support and counter-reaction. We can see this particularly in the medium specificities of visuals with regards to the usage of coloured flags in the space of profile pictures and in the usage of hashtags which tie together the dataset as well as the online debate and clearly divide the debate in pro and contra discussants. The comment space can also be used to declare the position, regardless of the depiction of certain imagery or hashtags. In that way it can be used autonomously. The geo-location is interesting as this allows to study the origins of socio-political orientation outside social media in the offline sphere.