In the ‘Local and Global Information Sources’ project we looked at human rights in various Google versions, and asked whether the results returned local pages rather than more global ones. Which countries have well-developed content providers for human rights issues, and which rely on non-local, perhaps even establishment sources? The case study explores the distinctiveness of local results across national Googles. What is the order of local information sources according to Google? How does it differ from other local cultures? And what societal claims can be made? The initial hypothesis was that national Googles without local results by default would show global sources. The case study initially began under the working title 'Default to Global.' The choice of the term human rights needs some explanation and consideration. Previous research has shown that NGOs have a tendency to subsume local issues (Rogers and Marres 2002). The choice of human rights therefore strongly emphasizes Google’s ability to present the local. Moreover, human rights is a mature issue. Sources returned can therefore be expected to be established, following the power-law distribution model. Since human rights is established, but an issue with specific local concerns at the same time, Google’s ability to present the local is at stake once again. Studying society with national Googles, once more brings up the question of what language to use for a query. When querying Google.be in Dutch (i.e. mensenrechten) or in French (i.e. droits de l'homme), the first page of information sources outputted are different all together, with the exception of europe.eu. In this case we decided to use the countries’ 'official languages' and the languages available in Google Translate to translate human rights (with a cross-reference to the Declaration of Human Rights which appeared in many languages). This resulted in a list of 173 result pages, of 121 national Googles, queried in 43 languages. Where are the information sources based? The second methodological step is to retrieve the location of the information sources outputted. The location of a website can be considered in a number of ways, including registering (webmaster’s geographical location) and hosting information (the geographical location where a website is stored). To avoid determining something as local based on where a particular server is located, as opposed to Google using hosting information in their algorithm, we decided to use the address of the website’s registrar as location, because it indicates where the owner of an information source is based. ‘Local’ sources are thus those registered in the country of the national domain Google (e.g. in google.com.eg the source anhri.net is considered ‘local’ because it is registered in Cairo, Egypt). ‘Global’ sources are those registered outside the borders of that country (e.g. in google.com.eg the source un.org is considered ‘global’ because it is registered in New York, USA). The third step is analytical. After the terms were queried and the top 10 information sources captured and localized, the results were visualized on a geographical map and subsequently analyzed. 40% of the national Googles have no local results in the top ten sources returned (see Figure 1). When comparing the number of local sources, the uneven distribution across national webs springs to the eye. The countries with most local sources are European, some North American, South American and Asian countries. Most countries in the top have location specific languages. It will not come as a surprise that African and Middle Eastern countries are found at the lower end of the list. 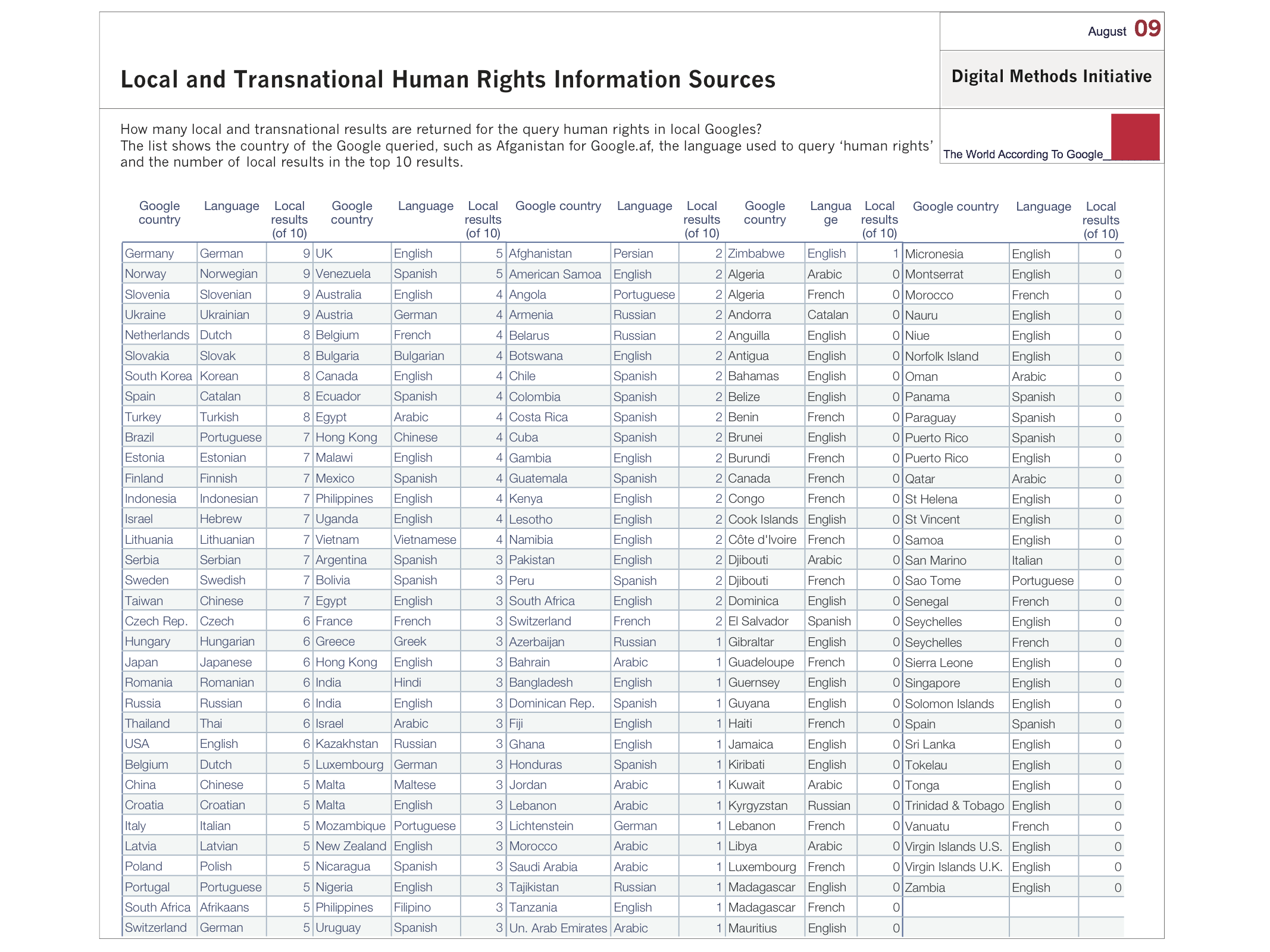 The most prominent information source across 121 national Googles, queried in 43 languages, is un.org. Eighty of the national Googles return un.org as one of the top ten results. As can be seen in Figure 2, countries that have un.org returned in the top results, are present across the globe, with the exception of large parts of Europe and some parts of the Middle East. 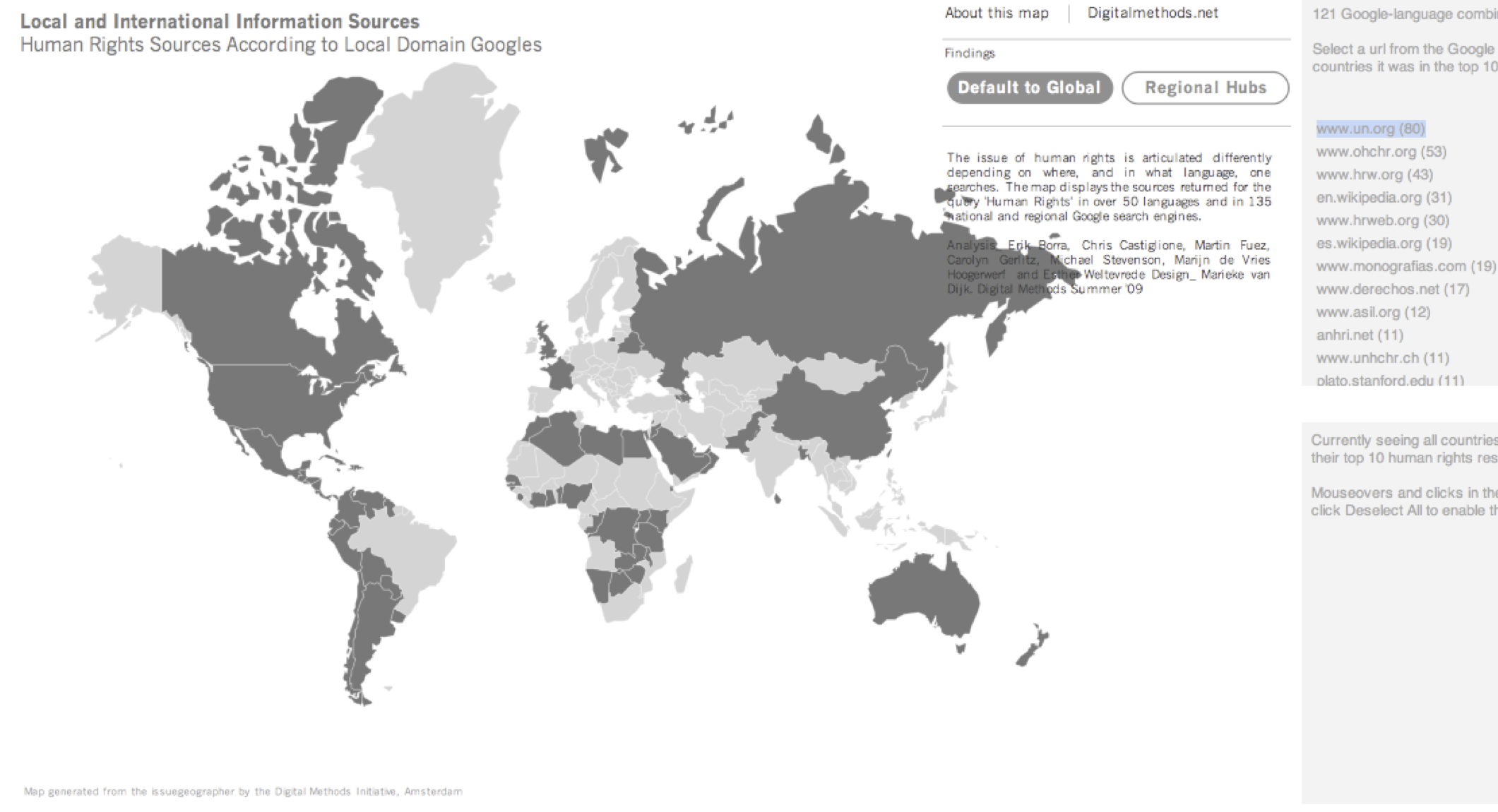 Comparing the information sources returned in Canada (Figure 3) and Northern Africa (Figure 4), we found similar Canadian and USA-based information sources (i.e. un.org, hrw.org). For Canada this means that actors are participants in the global debate about human rights; for Northern Africa this indicates that local actors are absent in the local information culture. The particular structure of local sources will be analyzed in more detail, but let us first examine top global sources. 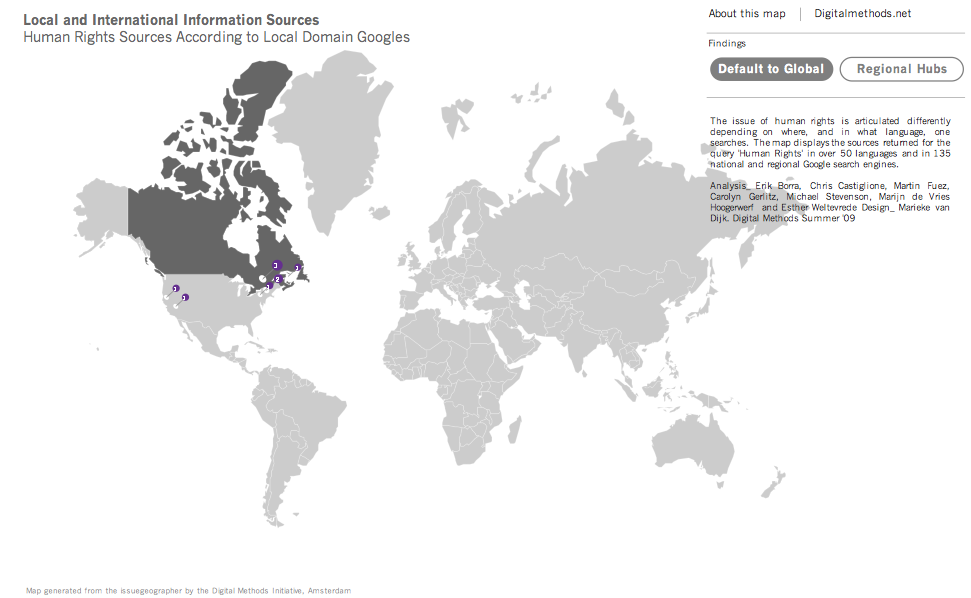 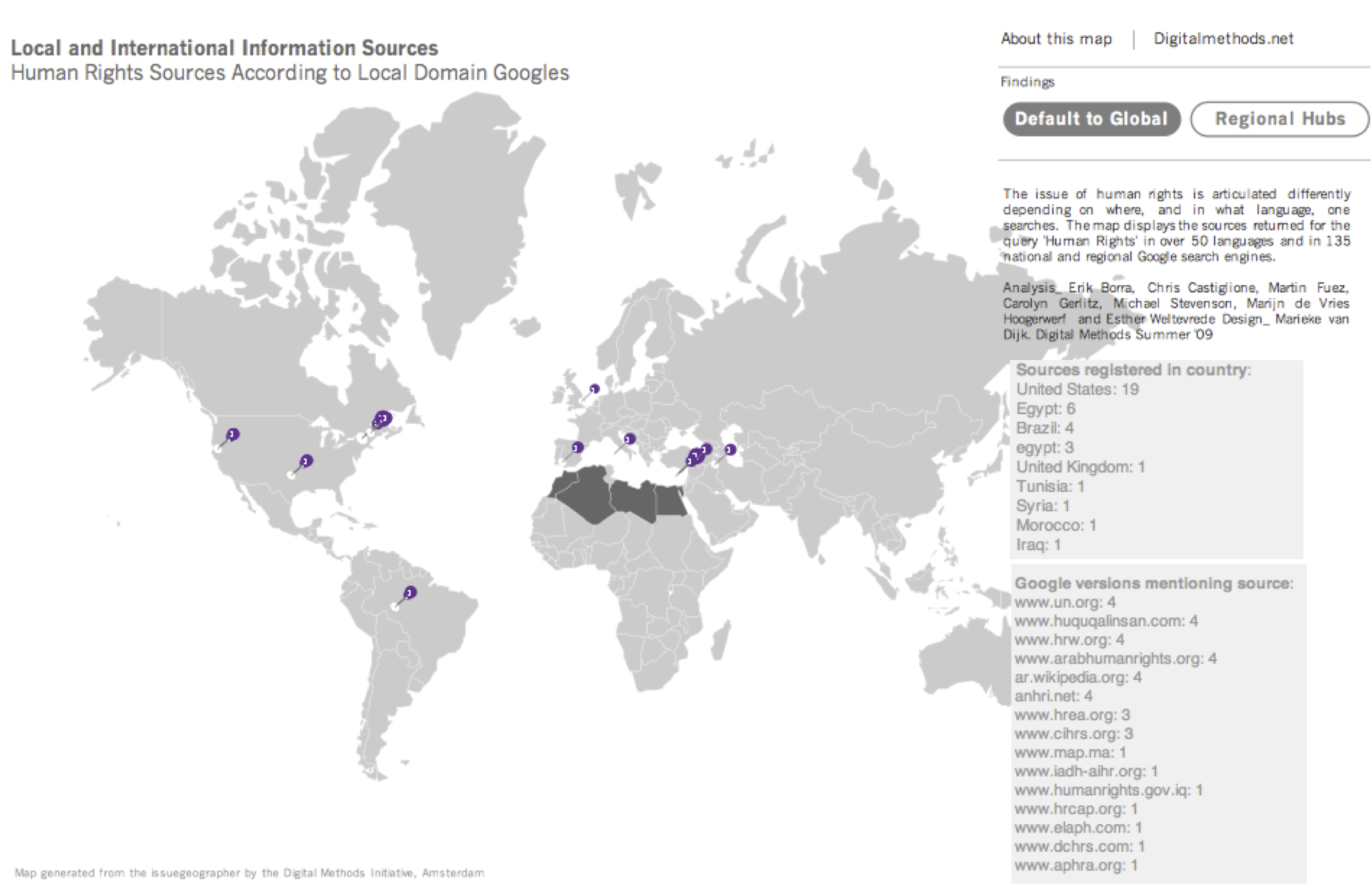 The United Nations are an international organization founded in 1945 by 51 states, committed to develop and strengthen friendly ties among nations, maintain international peace and security, and promote social progress, including living standards and human rights. Un.org results in particular are returned all over the global web when querying rights, as the United Nations published the Universal Declaration of Human Rights in all languages. Not only are they present with their own domain name, but the Declaration document turned up between the top information sources in the data set gathered for this study. Figure 5 presents the combined top sources for the query “human rights” (in all 43 languages). Sources featuring the Universal Declaration of Human Rights are highlighted. Hence the global top of human rights sources consist of the Declaration and Wikipedia. 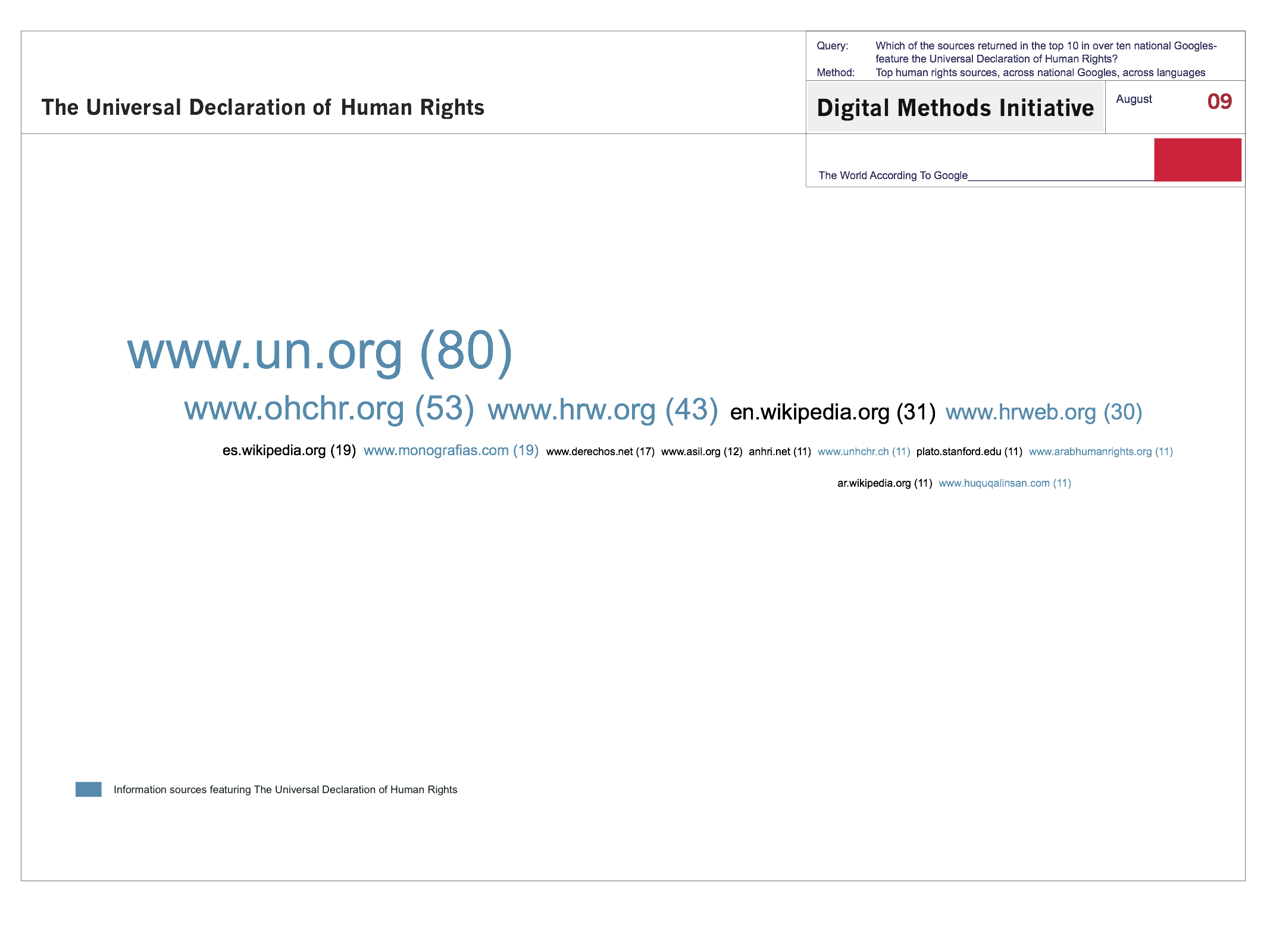 Figure 5. Prominence of the Declaration of Human Rights across the global web.

Un.org appears everywhere because it is an internationally established organization, and the declaration is available in all languages. This might be interpreted as search engine optimization (SEO) from a political economy perspective, but in the light of our methodology it can be interpreted as reflecting societal power-law dynamics. Below the buildup of sources returned in national Googles with Arabic as the first official language (Figure 6) is compared to sources returned in the European Union (Figure 9). The former study has a language bias since all national Googles are queried for human rights in Arabic, while the latter is queried in a wide variety of languages. In the Arab-speaking MENA countries (Middle East and Northern Africa), local sources are virtually absent. The shared sources are primarily USA-based, with the exception of the Brazilian huquqalinsan.com. However, we had already established that this Brazilian source features the UN’s Declaration. Moreover, half of the sources returned in the Arab-speaking countries are the identical; in the eleven national Googles, un.org, arabhumanrights.org, hrw.org, ar.wikipedia.org and anhri.net appear in the top. Although this may be interpreted as an absence of national webs in MENA countries, they are presented with a language web, a transnational mass niche formed by the Arab query. 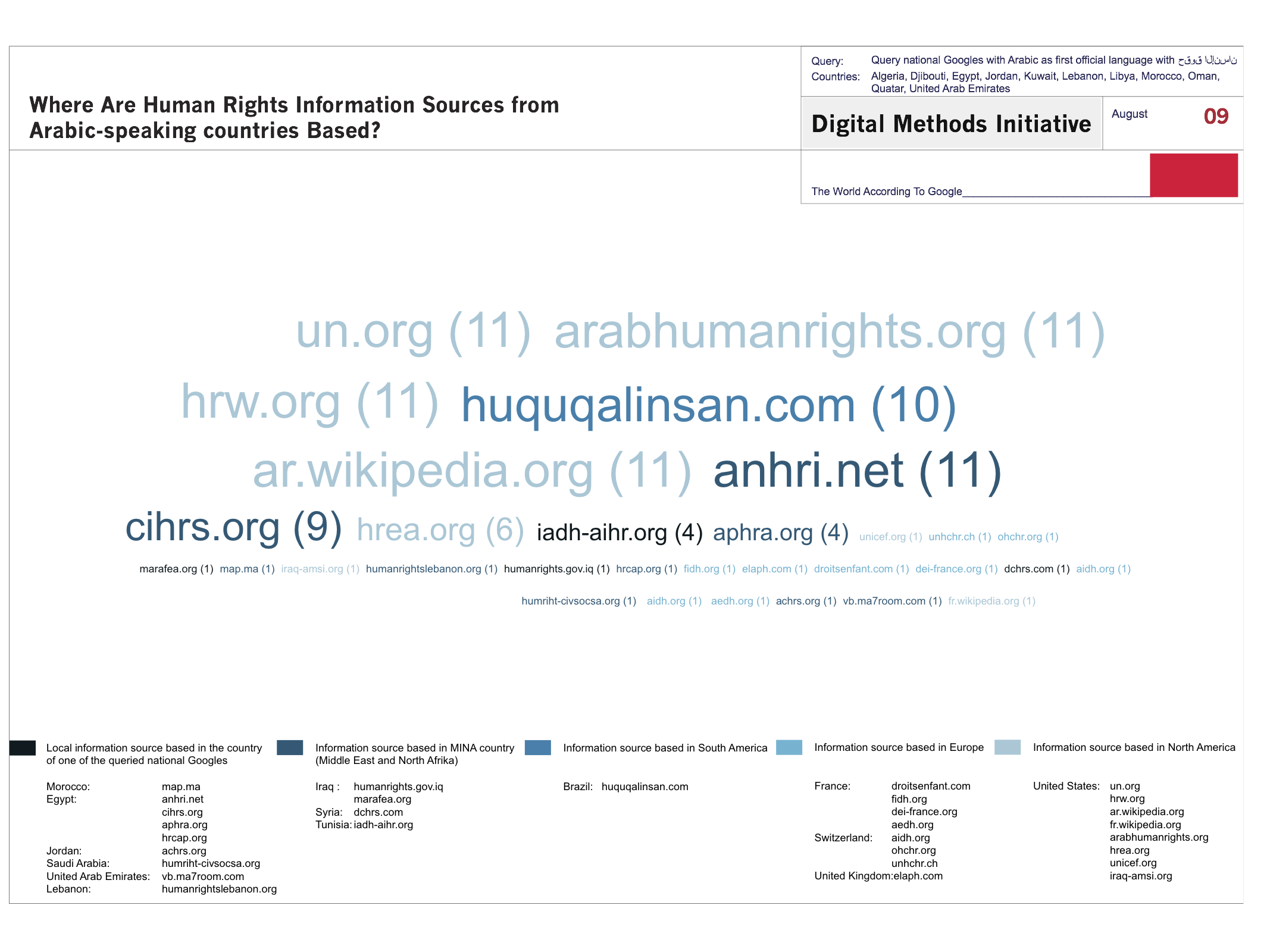 Next, comparing the Arab language web to a geographical region incapable of returning a language web, because of its different distribution of languages, the effort is to find out whether different compositions of regional hubs are possible. The European Union is the case example. The EU countries have distinct local languages. Moreover, as demonstrated by the studies above, the established sources are mostly US-based with some European actors in the fringe. Does the EU have local sources or do national Googles default to the established transnational sources too? Do EU countries share sources even though they do not have a common language? 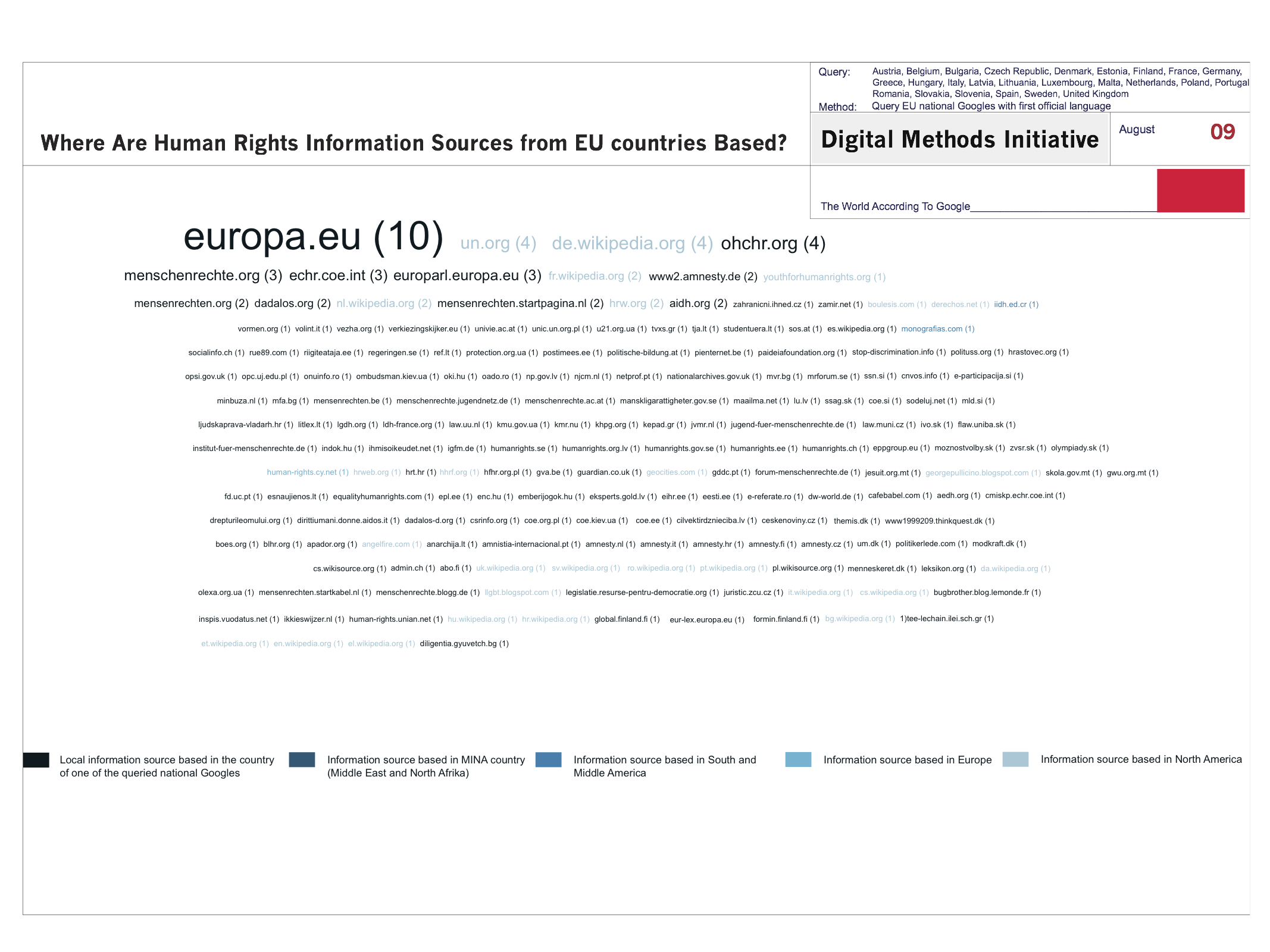 The twenty-five EU countries with local Googles hardly share sources. europe.eu is only returned as top source in ten countries. However, when examining where these sources are based, some are European and some US-based. The regional hub in Europe does not consist of shared sources, but of local results. Note that in the Arab study, the transnational sources are not Google.com sources; instead, we found a mass niche. However, when revisiting a number of these Googles, we found local results on the second page. In general it might be concluded that there is a power law distribution in the local results. It might be said that when an issue in a country has not yet fully matured, Google treats local results as niche items, found from the second page onwards. The globalizing algorithm thus underprivileges the underlinked, even if it is local.
The two empirical research projects show that Google may be viewed as organizing data for social and cultural research. Moreover, by reading the result pages as snapshots of power-law dynamics in national Googles, claims can be made about the status of an issue in national cultures. Taking into account Google’s workings, if the research intends to find local results one should turn to the second page.