This research seeks to examine climate change narratives in social media, particularly whether narratives surrounding fossil fuel phase-out have taken hold in Twitter and Facebook discourse. Our research was informed by a brief from climate action stakeholders, in which the stakeholders identified the meta-narratives developed and disseminated as part of their communications strategy. These stakeholders then defined their research needs, which included an analysis into whether these narratives have successfully made their way into social media sites, and if so, whether they were primarily shared by actors within the climage change "bubble," or whether some actors were migrating the coversation outside of the bubble into the broader public sphere. Here, the "bubble" was defined as the official social media accounts of climate change-related organizations, as well as the personal accounts of the employees of said organizations.

This study sought to address the research questions through both a top-down and bottom-up approach. Employing mixed methods enabled us to harness both the affordances of content analysis and the powerful interpretive visualizations of web analytic tools. The employed timeframe was 23 November 2014 - 19 December 2014. The specific Twitter and Facebook methodology are discussed further below. Twitter Methodology: Facebook Methodology

There is a substantive difference between the Lima COP20 and Peoples Climate March narrative. When looking at the co-hashtag analysis of the Lima COP20 dataset, the centre is dominated by a political narrative mostly depicting the COP20 event, with some indicators pointing towards the COP21 taking place in Paris 2015. Several countries and regional organizations are clearly visible in the network. In contrast, the People's Climate March co-hashtag analysis points towards a network dominated by civic society. The hashtags within the network are mostly connected to societal issues (including poverty and occupy wallstreet), with the People's Climate March functioning as an overall meta-narrative. Furthermore, there is a lack of science in both datasets as shown by the limited amount (re-tweets) of scientific work (articles, research, etc). There is also a relatively large amount of users engaging in both events (10.000 overlap). In short, the findings point towards a climate change narrative taking place mostly within 'the bubble'. 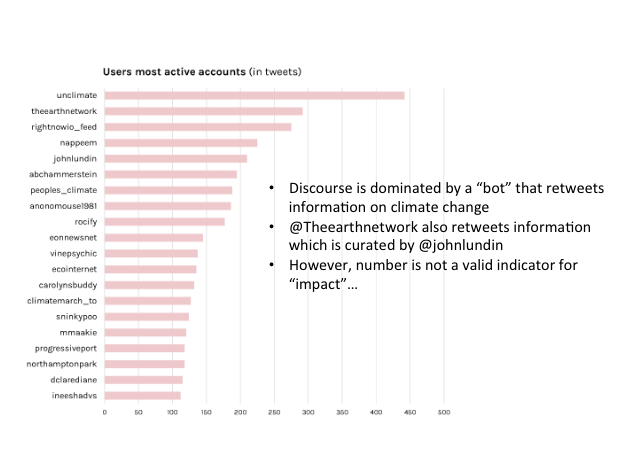 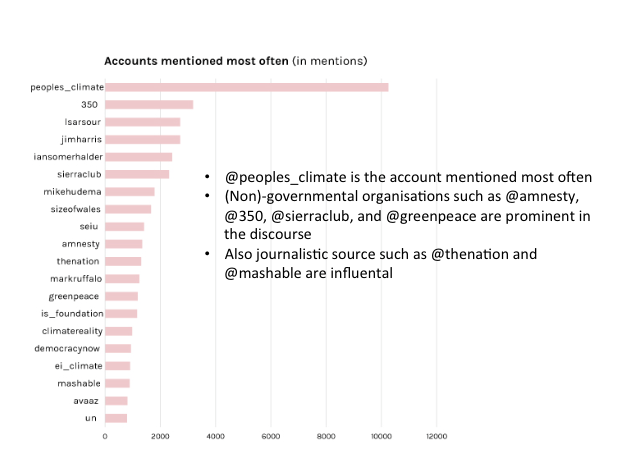 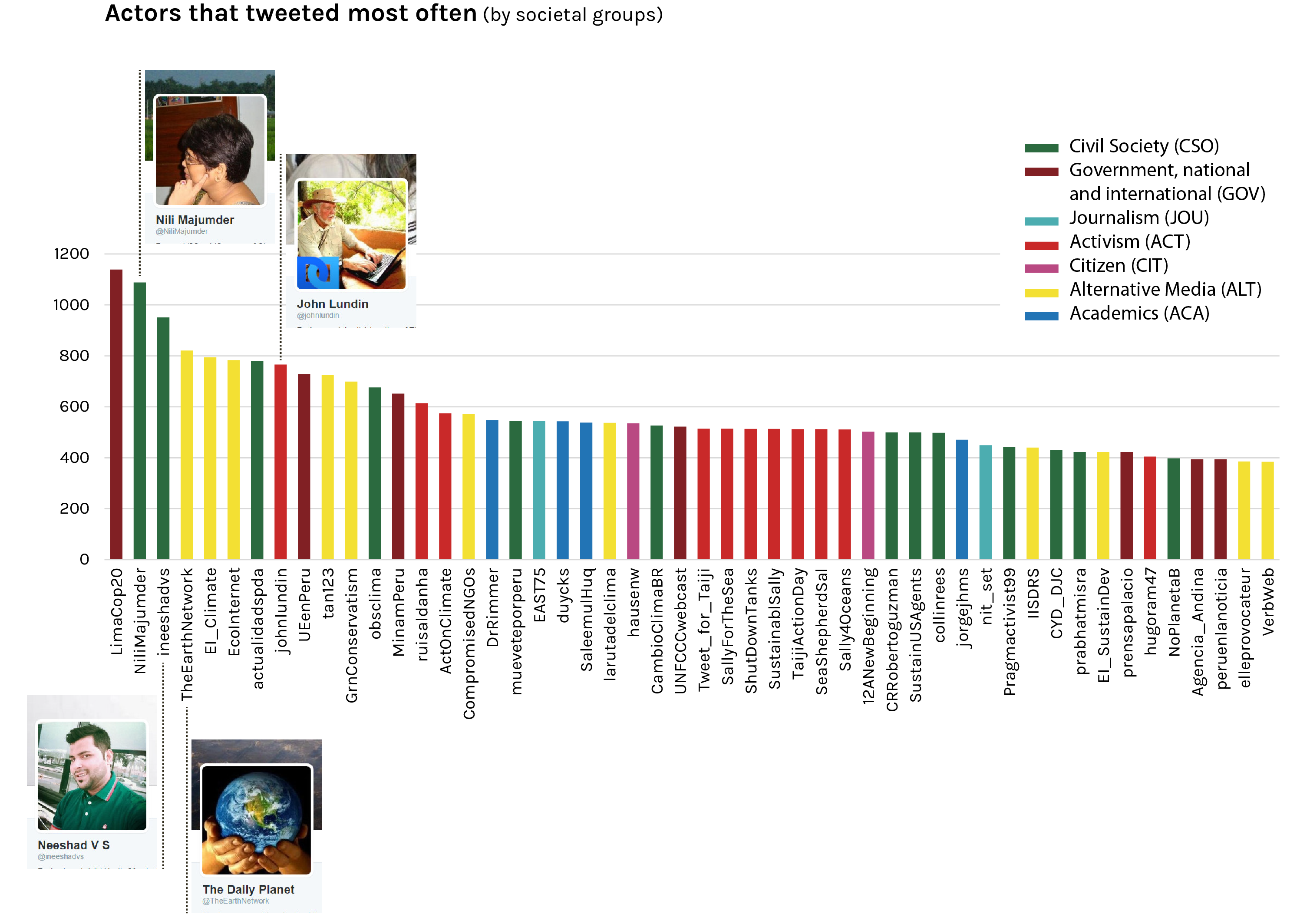 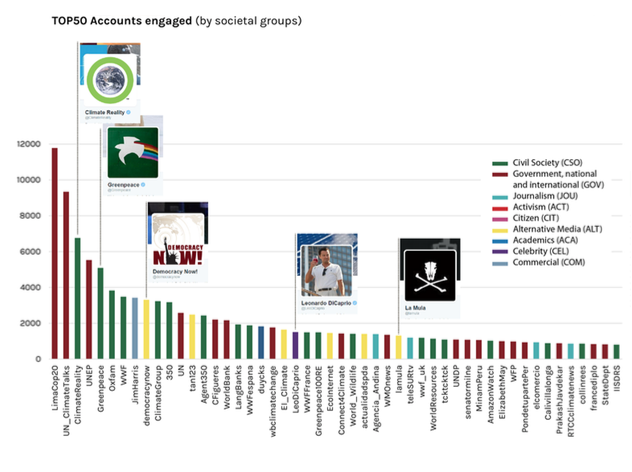 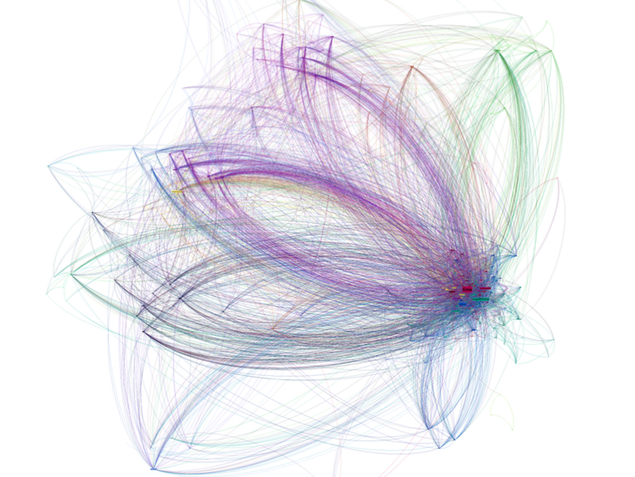 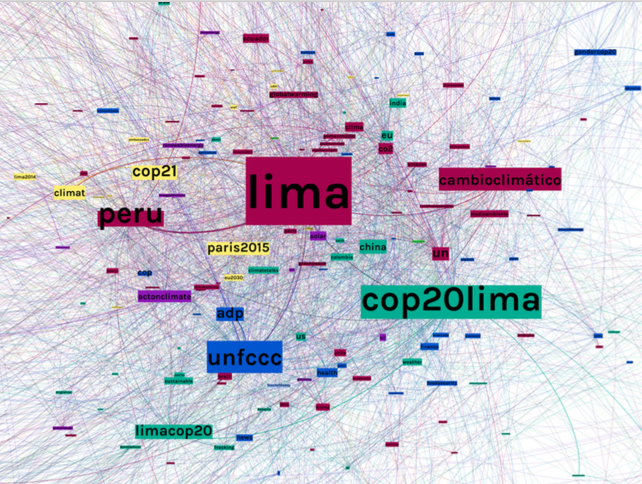 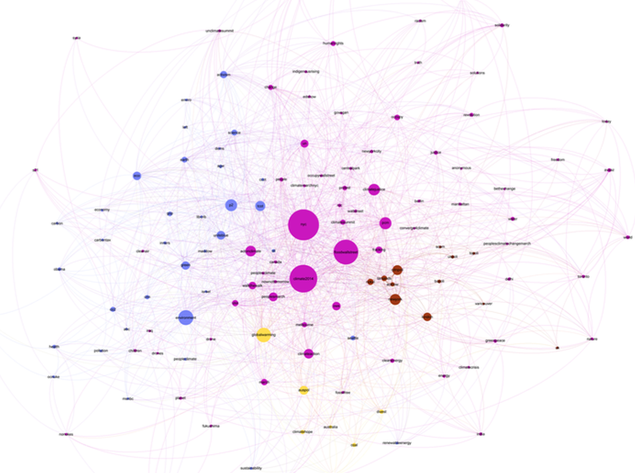 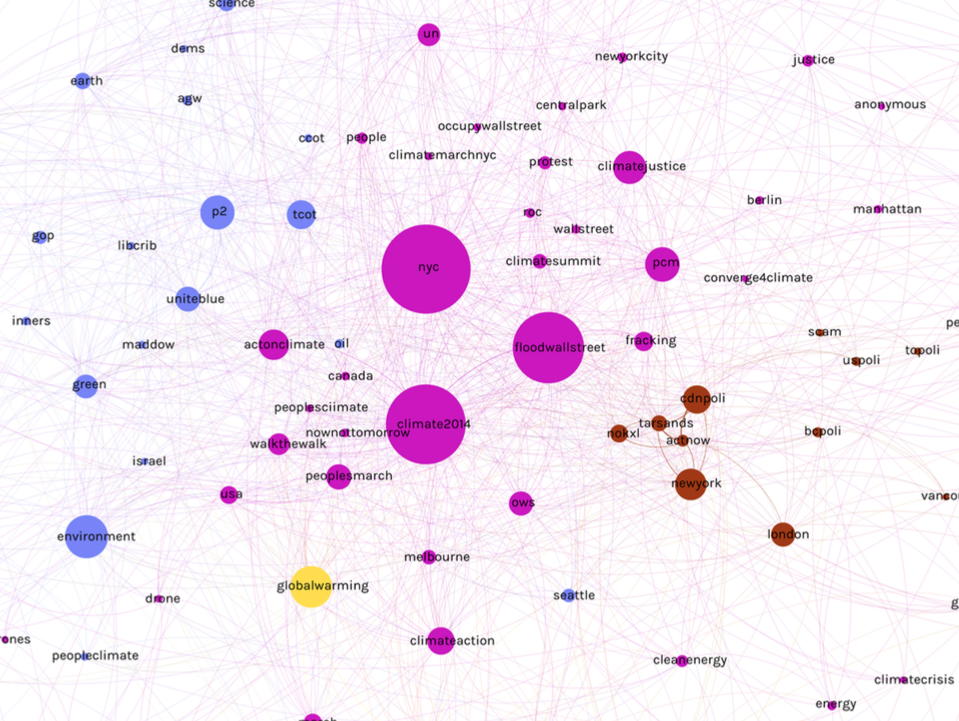 The most engaged with content on Facebook is mostly generated by celebrities, such as Emma Watson receiving an engagement of 7557 (total number of likes, comments and shares) on 2 December 2014. Furthermore, on 27 November 2014 Greenpeace International posted a message surrounding Colin Butler's arrest and release from custody after a peaceful protest against Whitehave Coal's mine in the Leard state Forest, receiving an engagement of 5016. The content analysis result show that most posts can be labeled as 'action, 'venue', 'global community', 'economics', and 'COP20 Event' - where the latter two labels resonate with the Twitter co-hashtag analysis results. In short, despite the prevelence of a climate change [COP20] narrative on Facebook, more meaningful and nuanced messages appear to get lost. 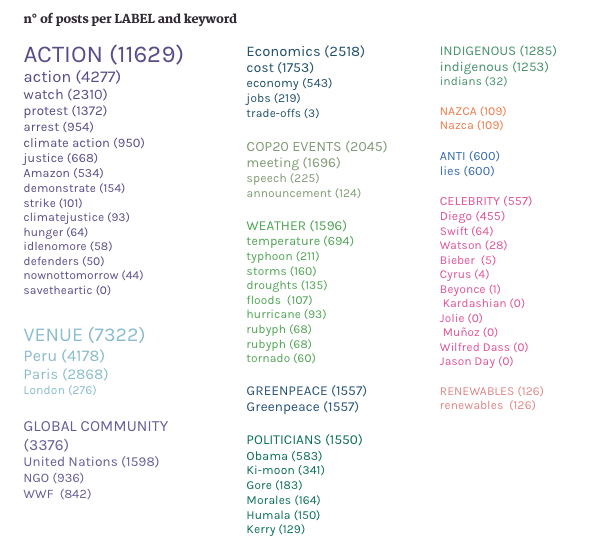 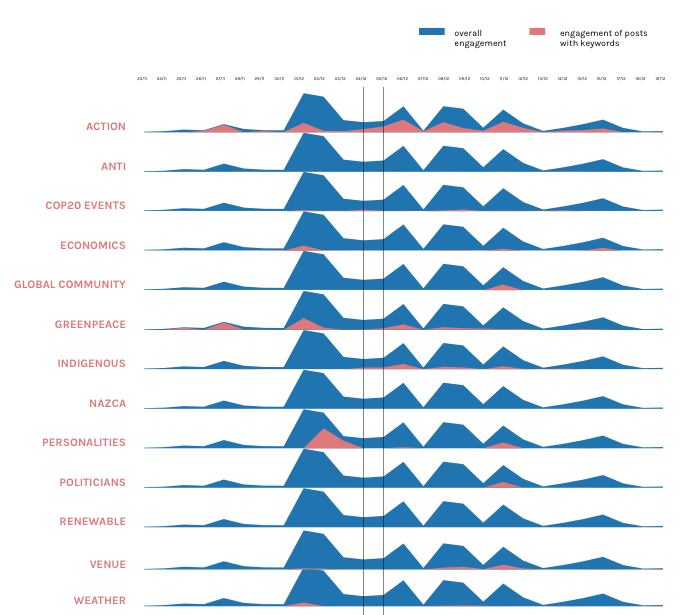 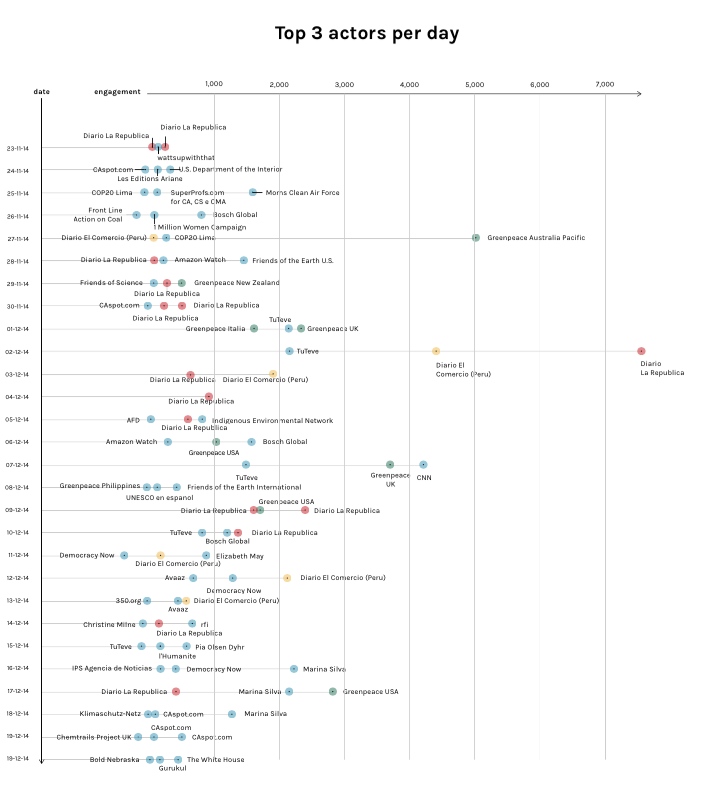 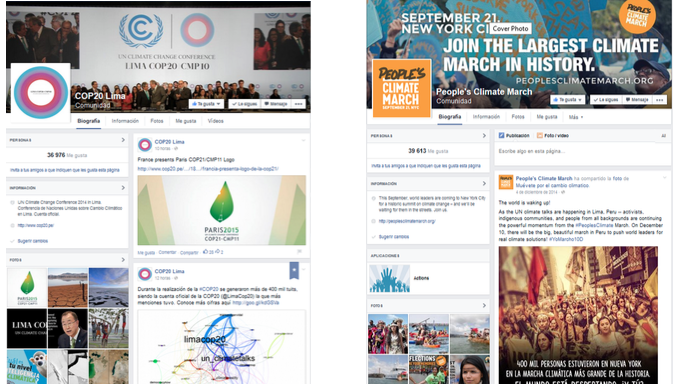 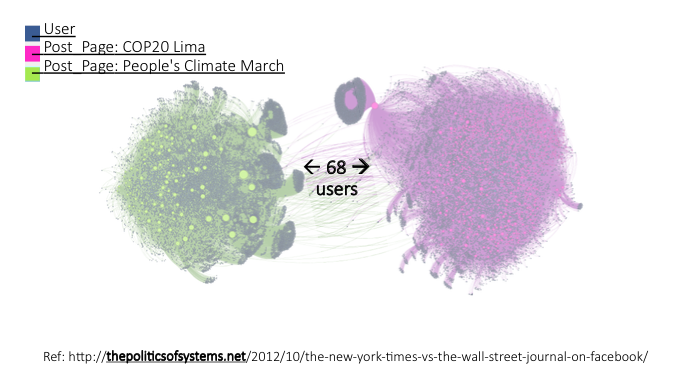 This study has examined the overall narrative of the climate change debate surrounding COP20 and the People's Climate March event, by identifying the most active users as well as the most engaged with content on Facebook and Twitter, for the period of 23 November 2014 to 19 December 2014. The findings point towards a 'bubbled' climate change narrative, where celebrities and media capitalize most of the engagement. The results therefore indicate that platform specific properties need to be taken into account, as well as the consideration of alternative platforms.