This study was inspired by research done my Mahsa Alimardani and Frederic Jacobs for Global Voices Advocacy.

Centralization of Iranian cyberspace came to fruition during and after the 2009 protest movement against the fraudulent presidential elections. The unrest that ensued in 2009, with the aid of communication technology devices, such as Facebook, active blogs, and online TV streams of opposition candidates Mehdi Karroubi and Mir Hossein Mousavi, resulted in the later shut down or filtering of many websites, including Facebook and Twitter. From this point onwards cyberspace was considered a sphere of threat to national security in need of state control. As such, this online censorship is an indicator of a government strategy to restrain society. Researchers see this online restraint as a tool in reducing the availability of information, and criticism against the government, and an obstruction in the development of online communities' development (Faris and Villeneuve 2008).

The study of Irans Internet reveal a discourse of increasing control, and centralization of Internet policy. The government has indicated through a number of statements and projects their desire to build a stronger national internet infrastructure, and implement sophisticated technology in both the practices of surveillance and censorship of the Iranian Internet.

It is not certain when the 'intelligent' filtering program started targeting Instagram pages, but we know that this started as early as October 2014, when the first reported page belonging to the Rich Kids of Tehran were blocked (AFP 2014). Statements in March by the Minister of ICT Mahmoud Vaezi indicate that this is a multi-phased program by the Ministry to make sure Iranians can still access appropriate content on the platform. Vaezi has declared that his Ministrys intention is the following: Our policy is that we will not restrict the activities of any mobile social media, and when we do announce it, it will be when we find an alternative for this network inside the country (Shargh 2015). As stated before, there is an increasing awareness of the ineffectiveness in blocking these platforms, and as such there is a push towards intelligent filtering as a new method of Internet control.

The concept of 'intelligent' filtering first arose during Mahmoud Ahmadinejads Presidency. In late 2012 a Facebook page was created for the Supreme Leader Ali Khamenei, leading many to speculate that Iranian authorities were rethinking policies regarding the filtering of Facebook and Twitter.

What remains to be said however, is that the correlation between the Ministers statements regarding Smart Filtering, and the technical implementation of the filtering process remain to be vague. With the May 2015 study that has inspired this current research, it became apparent that intelligent filtering, or per page censorship on Instagram content was no longer possible once https was implemented on the mobile application. A few options are still open to them such as filtering on a per image basis (instead of a per user basis) since images are sent over HTTP from Instagrams content delivery network. This would prevent an offensive image from being displayed within a users profile page while the number of followers, biography, likes and comments of pictures would still be able to load, as these are sent over HTTPS. Because of these platform specifications, and recent reports that intelligent filtering is now occurring for certain images, the first part of this study endeavors to understand why Iranians have had difficulty uploading certain images on Instagram (ICHRI 2015). For example, users in Iran were unable to upload random images that were seemingly innocuous photos without political motivations

This has led to some suspicions by Iranian Internet users and researchers that this is a conscious effort at censoring images belonging to activists (ICHRI 2015).

For this reason, this study endeavors to ask, does intelligent filtering now continue on a per image basis?

Additionally, to further explore the question of controls inside of Iran, this study endeavors to understand the monitoring and shaping Iranian authorities might implement in the wake of the IRGC Spider program.

How is the Iranian government censoring and shaping the flow of information online?

Using expert knowledge of the Iranian activists and politicians, we created three categories of actors: activists, opposition leaders, and members of the current government and elite.

For this we sorted list of IP addresses assigned to Facebook, get the associated hostname(s) through the following command: <code>host IP_ADDRESS</code>.

The hostnames returned will indicate for which service Facebook uses the IP address and for which location it serves results. E.g. instagram-p3-shv-01-fra3.fbcdn.net serves results for instagram from France. Geo-IP lookups confirmed this. For a total list of 23712 IP addresses, 5431 hostnames were found.

To test whether the hosts are accessible, telnet connections were made to each IP and host on ports 80 (HTTP) and 443 (HTTPS). This was done both from the Netherlands, as well as from a Virtual private Server (VPS) in Iran. The results were then compared. 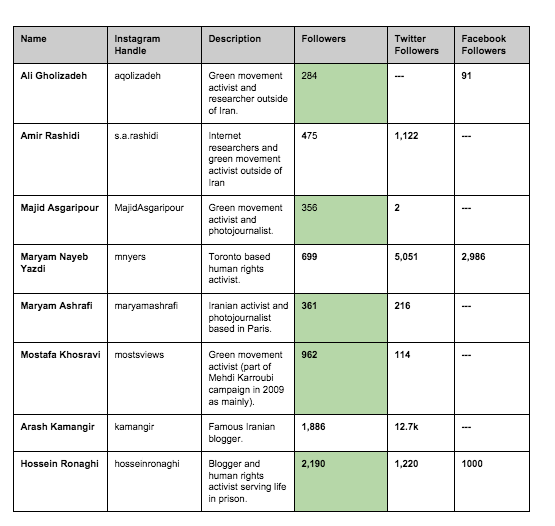 The social media presence of a few of these actors is solely based on their Instagram presence, such as the jailed activist Hossein Ronaghi. Other activists whose background is based in photography, such as Mostafa Khosravi and Ali Gholizadeh.

In examining the networks that the followers of prominent politicians, who are both part of Irans hardliners, reformists, current government, and opposition illustrated an interesting network of interconnections for us. 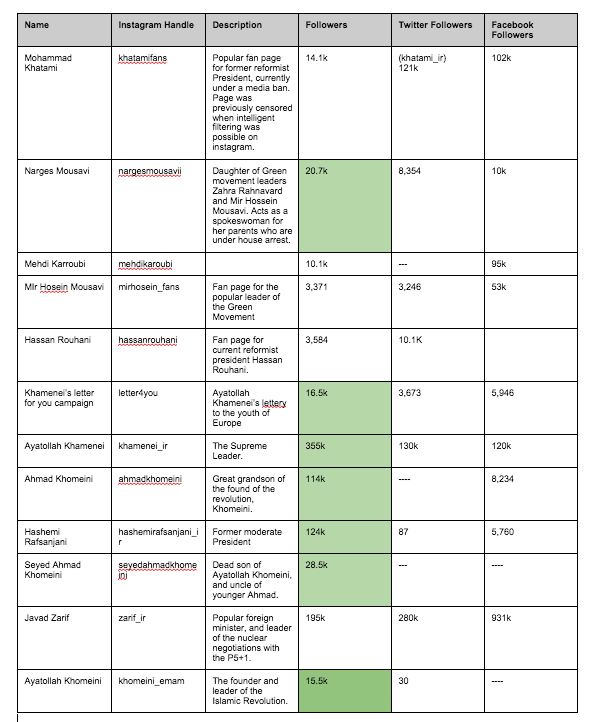 Amongst these political figures, it is evident that certain personalities are present in social media predominantly through their instagram accounts. Narges Mousavi, who is in many ways the defacto spokesperson for her parents, the Green Movement leaders currently under house arrest, Mir Hossein Mousavi and Zahra Rahnavard, has about 20, 000 followers for her photos. Khameneis Letter4You campaign seems to be dominant mainly on Instagram -although studies regarding bots tweeting the hashtag for this campaign might be a reason why there are less Twitter followers. Surprisingly, the Supreme Leaders Instagram page dominates in the other major platforms he is present on. His account predominately features images of him from the past and present, with other significant members of the clergy and elite, or featuring him in many of his public appearances around Iran, or praying. The account for Ahmad Khomeini is a platform much talked about and discussed, by reformists and hardliners in Iran, as he is the offspring of one of the holiest figures in the Islamic Republic, Ayatollah Khomeini, the founder and leader of the Islamic Revolution. The popularity, and celebrity associated with his Instagram account that illustrates the behind-closed doors of some of the countrys elite, is touted by many to be transforming the culture of the Iran in one filled with many western mores of celebrity, and exposure (Economist 2014). Other significant accounts are for the long deceased Khomeini, and his son Ahmad, who maintain large followings on memorial Instagram accounts.

The popularity of Instagram as such seems to indicate an integration into western modes of celebrity and exposure. This in turn might signify the general shift Iran is experiencing under the current moderate administration of Hassan Rouhani, and the push towards reconciliation with the United States and the Western world -more integration into the global world.

Further analysis of the networks that followers of these accounts form elaborates a little more on the political tendencies, and influence of these actors inside Iran through the perspective of Iranian Instagram usage. It must be noted that we could not verify whether these accounts were located inside or outside of Iran, but the majority were using Iranian usernames, and posting in the Persian language.

Figure 3. Network of followers belonging to opposition and pro-government actors.

The clusters of followers are clearly divided, with different communities for the different politician nodes under examination. What is clearly evident here, is that the Supreme Leader Ayatollah Khameneis campaign letter4you maintains the most separated community of followers at the bottom of the graph. This follows the research already done on the letter4you Twitter account, that is being populated by interactions and followers by bots, tweeting the accounts associated hashtag #letter4you (Alimardani 2015). The interconnectedness of followers between the Supreme Leader Khamenei and the current Foreign Minister Javad Zarif is also notable. In fact Khamenei, Zarif, the former moderate President Rafsanjani, and the young great-grandson of the founder of the revolution Ahmad Khomeini all cluster closely on the left of this network. What is surprising however, is the close relationship between the followers of the memorial accounts of the founder of the revolution Khomeini, and his son Seyed Ahmad, with reformist and opposition elements such as khatamifans (a previously censored account when intelligent filtering was underway), and members of the Green Movement who are under house arrest, such as mirhosein_fans and mehdikaroubi.

The connection of actors explains the relationships and work of different types of Iranian activists. You can clearly see the actors with the most followers. Hossein Ronaghi, well known for his blogging and subsequent incarceration has a strong community of followers in common with another notable blogger, Arash Kamangir, that lives in exile in Canada. Similarily, the exiled Green Movement activists mostsviews and s.a.rashidi are both strongly connected at the center of the network, alongside another lesser followed Green Movement activist now living outside of Iran (aqolizadeh). The activist photojournalists Maryam Ashrafi and Majid Asgarisadeh also have the strongest connection of followers, probably related to their similar professions. Maryam Nayeb Yazdi, whose main profession is activism (unlike the others who have descriptions as researchers, bloggers, prisoners and photographers) is at the bottom of the network, mainly sharing followers with those activists living in exile.

Figure 5. All Networks Combined (Connections between Activists, Iranian Opposition Figures, and the members of the government and elite).

The overall network initially just looks like the activist network loosely connected with the network of government and pro-regime elites, and opposition figures. However, we can see some loose, and often random associations between the followers of activists and government affiliated members. For example, kamangir sares followers with individuals such as Rafsanjani, and Ahmad Khomeini.

Using the DMI Instagram User Info scraper, we collected information about users in the activist and pro-regime networks, including how many posts, followers, and users they are following. Although some queries did not return data, we were able to obtain user information for 7, 184 activist follower accounts and 7,997 pro-regime follower accounts. Of the activist accounts, 4,290 (about 60%) were public and of the pro-regime accounts, 5,230 (about 65%) were public.

Figure 9. Comparison of accounts being followed by users in each Instagram network.
When using the DMI Triangulation tool to compare the usernames in each network, we found there were 1,106 users that appeared both in the activist and the pro-regime network. Given the low activity of pro-regime accounts and the numerous pro-regime accounts that are empty, it is likely that many of the accounts shared between the networks also have these suspicious characteristics. This highlights these users for further investigation to determine whether these might be accounts created to surveil activist Instagram networks.Hack instagram