57.1% of US Internet users are on Facebook; in 2010, Facebook grew by 7.9 users/second; In August 2010, U.S. Internet users spent 41.1 billion minutes on Facebook, surpassing Google Inc.’s 39.8 billion minutes for the first time (source: social commerce today). Facebook’s version of reality can be characterized as un-realistic, portraying an all open-world where everyone shares information happily and willingly. Eg., One can have friends but no enemies, one can like posts but not dislike them. Facebook does not only engage with the social through this framework, but ventures into the political through “pages”, issues, campaigns and groups. This uncritical perspective, which in a way is “cleaned up” from the messy, complex and at times corrupt reality of politics can be dangerous. If people use Facebook to relate to politicians and political movements, a more critical and realistic portrayal of information is needed. This project seeks to “deface” Facebook of its cleaned up and naïve façade by re-introducing the connection between money and politics. We chose to focus on this issue particularly as different activities such as campaign finances, lobbying, advocacy group contributions and Political Action Committee influences have a direct and tangible effect on national politics – effect which is often under-represented.
This project aims to contextualize political opinions within a complex eco-system of money and power by making these covered money-politics links more available, interactive and easy to understand for the Facebook user.

We are proposing to create a add on which will activate the real Facebook. The add-on will integrate several APIs that will reconfigurate the Facebook page.

Shows a list of the 10 people who have given the most money to his campaign.
Data collected from:

Heard around the grapevine

A section were common online forms of misconceptions (like chain-mails) about the candidate get cleared.
Data collected from

Similar to the already-existing interface which allows users to “like” causes or organizations, this section shows the topic areas, organizations, or industries which fund the candidate’s campaign, and therefore he “likes”. Can be organized by: issue, organization, industry, political leaning etc Data collected from:

We used the Facebook page of Mitt Romney as example, the information in the mock-up were collected from the previous mentioned websites on January 27, 2012. 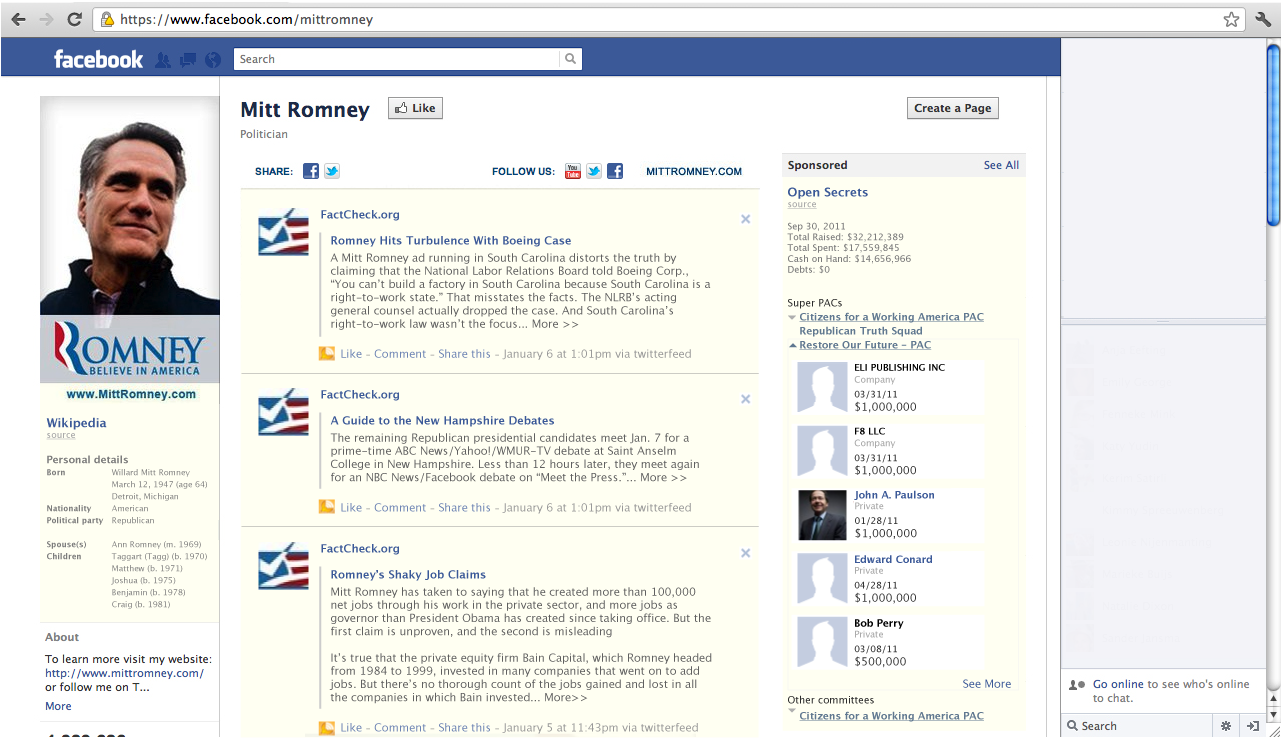