This paper proposes a method to repurpose Amazon.com, the world's largest electronic commerce company and one of the leading product search engines, as a research engine for social and cultural analysis. So far, Amazon.com has been studied, together with other Web 2.0 platforms, as a form of online culture, and particularly participatory web culture. These forms of web culture have been celebrated by some scholars for revolutionising the way information is produced and consumed (Benkler, 2006; Jenkins, 2006, Bruns, 2010) and questioned by others in terms of the type of agency that they enable (Van Dijck, 2009) and as forms of free labour (Terranova, 2004).

Following Rogers (2009, 2013) the paper moves the study of Amazon.com beyond the examination of online culture and repurposes the platform for research into societal conditions. In The Googlization Question, and the Inculpable Engine Rogers states: We look at Google results and see society, instead of Google (2009). In an info-political critique fashion Rogers treats the search engine as a status-authoring device and its results as telling a story about the current status of a topic or issue.

It is this move to search as a research practice that we take in our study. Thus we ask: what kind of search engine is Amazon.com? How can it be repurposed to answer research questions? What are the implications of doing social analysis with Amazon?

To answer these questions we take as a case study the climate change debate and three of its main sub-issues: climate change denial or scepticism, climate change adaptation and climate change mitigation. We examine how these issues present in scientific literature on the topic are taken up in mainstream literature on Amazon and organized by the platform and its users. And most importantly, we enquire into what can this research add to the study of the climate change debate and what questions it can help us answer. To do so we think of debate trends in terms of keyword uptake and issue formatting. As used in debate mapping, keyword uptake refers to the popularity of specific terms or language in a debate. This popularity might give indications of the level of appropriation of a terminology by a group of actors and how the act of appropriation can indicate a level of commitment. With formatting we refer to how a larger issue (e.g. climate change) is organised into sub-issues or other more tangible forms (campaigns, celebrity endorsements, conspiracy theories, relevant actors).

To operationalize the research questions we follow the medium and turn to the platform. One of the features that made Amazon widely popular is its recommendation system. Products are suggested to users based on features such as keyword autocomplete while typing a query, and the resulting list of books. The list of books is generated based on a combination of metrics such as sales rank, user reviews and item-to-item recommendation algorithm. Recommendation shapes the overall experience of both searching and purchasing on Amazon. This aspect of recommendation is also what we wish to integrate into our research and methods.

(a) Making collections of topsales issues and formats

Method: The tool Amazon Book Explorer, developed at the Digital Methods and used for this research, allows to query Amazon for a specific keyword and to receive lists of books that are ranked by sales with their associated metadata. This allows to refine our question: what sub-issues in the climate change debate are top selling issues and what formats do best in the market? To study an issue through its top sales provides an entry point to the dynamics of competition, attention and formating of a techno-scientific in a mainstream book market space. It is possible to affirm that top sellers and their popularity is an indication of success of specific topics over others to be uptaken by the audience and reflect overall trends in the conversation and a rough measure of influence. Here the tool Amazon Book Explorer is used to query Amazon.com for each sub-area of the debate. The tool outputs the top 100 books recommended based on their sales rank at the day of the query. The result are 300 book titles and their associated metadata including tite, year of publication and field. From the titles we follow to capture keywords, creating three lists that were later triangulated and clustered. 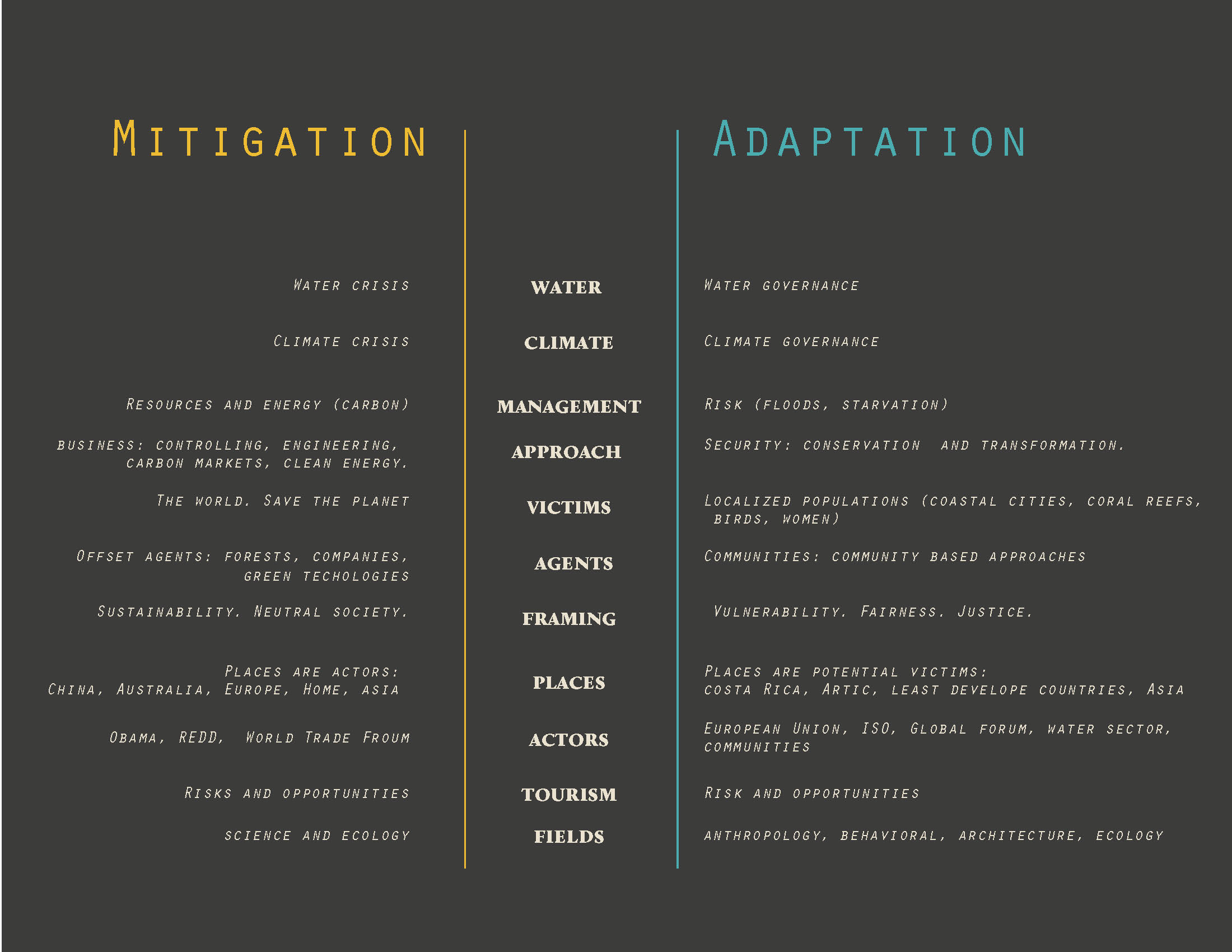 For a more detailed map, see "climate_3_way" attached to this wiki.

Findings: For skepticism most of the successful language emphasizes the scandalous and urgent nature the deception. For instance, "corruption", "conspiracy" and "hoax". Also, introducing actors and specific scandals such as "Kyoto", "climategate" (which refers to set of leaked emails) and "Hockey stick". On the other hand, the keywords or sub-issues captured for mitigation and adaptation are clustered around shared terms, even though they obey a different logic. While in mitigation literature water and climate are associated with the term crisis, in adaptation literature they are related with a need for governance. Shared keywords could emphasize the competing nature of the issues. A sense of urgency in mitigation literature is created by language such as save the world and by framing the issue as global, while adaptation turns to specific locations and populations: bird migration, coral reefs, coastal cities, least developed countries and women.

The language captured in the mitigation collection describes management of resources, with "carbon" as a cluster (carbon markets, carbon crunch and carbon dioxide capture). On the other hand, what needs to be managed in the adaptation discourse are natural risks, including floods and drought. A second cluster forms around strategies that will allow to contrast the effects of climate change. In mitigation social innovation, spatial planning, smart development, geoengineering, monitoring, offsetting. These keywords describe a business center approach, also including corporate. A notion of the future is sketch with keywords such as "neutral" society. The taxation approach of the mitigation meets in the adaptation discourse a crisis of capitalism, needs for community, cooperation. Very telling are also the presence of the keywords: fairness, justice, leadership.

Some issues are at first glance are absent: human rights, indigenous population, human beings. Are they unrepresented on mainstream literature? Finally, the triangulation tool was used to tests which keys words were shared in the three debate spaces of skepticism, mitigation and adaptation. What do this three debate spaces have in common? Most overlaps took place between mitigation and adaptation in terms of places. Both keywords lists include: Asia, cities, European Union, the local and tourism.

(b) Testing 'freshness' of topsales collections.

Method: The keywords (as they belong to specific book titles) are associated with the year of publication of the book they belong to. These keywords then were visualized over time, in three overimposed timelines, one for each approach (skepticism, mitigation, adaptation). The timelines show (a) overlap between approaches (b) keywords that have remained relevant throughout the years, and therefore have been included in several publication over time (c) gives an overall indication of the freshness of the sample. In other words, if top selling books are also new books.

Findings: Adaptation appears to be the most constant collection including books published since 2001 almost constantly until 2013 with a gap between 2006 and 2008. However, the collection is mostly made of recent books. Mitigation is similar, with the oldest book in the collection also dating from 2001, experiencing a gap until 2005 and then constantly including newer titles. Skepticism is different. The top selling books include older books dating from 1901 (a study about climate change in Africa), and although the 1990, 1995, 1999, 2000 and 2003. The larger part of the collection is still composed of newer titles.

(c) Autocomplete: keyword uptake. In Amazon, which sub-area of the climate debate is receiving more attention? Is popular enough to be a suggested query? Here a query exercise was performed. The term [climate change] is inserted on Amazons search engine, all subsequent suggested queries in alphabetical order are captured. Findings: adaptation and several keywords associated with skepticism (such as hoax and denial are suggested). Mitigation is not, perhaps indicating a less popular or effective terminology.

We used the climate change/global warming collection compiled with the DMI Twitter Capture and Analysis Tool (TCAT). The queries that produced this collection are: globalwarming (global warming, globalwarming, climate, climatechange, drought, flood) and the timeframe is Nov. 2012 - June 2013. In the first week of the project we took a top-down approach and studied how mainstream issues: scepticism, mitigation and adaptation are taken up in the climate change Twitter space. This resulted in a profile of scepticism, mitigation and adaptation on Twitter which includied: the number of tweets, the number of issues, the top 10 hashtags per issue, the top 10 mentioned users, the top 10 active users, the top 10 host names, the top most shared URL and the top most retweeted tweet. [insert image] 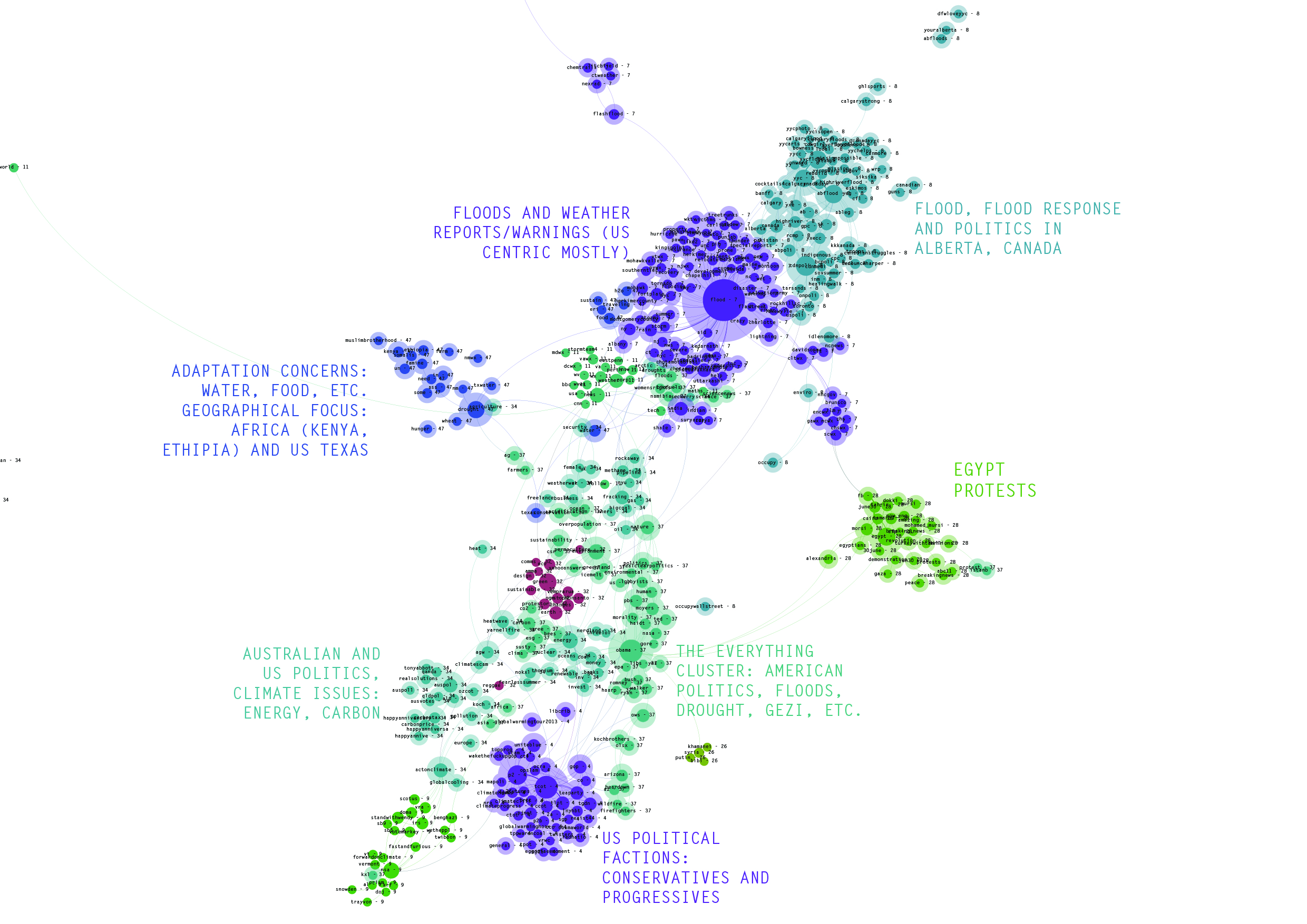 In the second week we decided to take a bottom-up approach and examine what issues emerge from analysing clusters of hashtags in the climate change Twitter space and how they can be described. To generate the hashtag clusters we used the 'co-hashtag analysis' feature of TCAT, which produces an undirected graph based on co-word analysis of hashtags. We visualised this file in Gephi and identified the top clusters according to 'modularity class'. We manually annotated the top 9 clusters. The first cluster is an Australian and US politics cluster which includes topics like energy and carbon. The second cluster is is a combination of American politics, floods, drought, Gezi, etc. The third cluster focuses on floods and weather. The fourth cluster focuses on a particular natural disaster: flood, flood response and politics in Alberta, Canada. The fifth cluster represents US political factions: conservatives and progressives. The sixth is an event cluster: Egypt protest(s). The seventh is a sort of adaptation cluster discussing: water, food, sustainability. the geographical focus of this cluster seems to be Africa (Kenya, Ethipia) and US Texas. The eighth cluster captures major US politics events: NSA, Prism, Benghazi, Snowden. The ninth cluster captures US states weather reports and announcements. [insert image] The main findings of this analysis are: 1. The top clusters do not match vocabularies of scepticism, mitigation and adaptation; 2. Some geolocations dominate the discourse: Australia and US (politics, flood and drought) and Canada (flood); 3. There are seemingly unrelated clusters in the climate change space (why arab spring and Prism?). Next, we zoomed into Twitter activity in the climate change space around the Obama speech on climate change, which took place at Georgetown University on 25 June 2013. For this second analysis we used the hashtag cluster 'climate change and American politics'. Our timeframe was the week around the Obama speech, namely 20-27 June 2013. To focus on the main political hashtags in that space, we filtered the cluster by 'tcot OR p2 OR tlot OR ccot OR uniteblue OR gop OR ocra OR ctl OR ctot OR p2b OR libcrib OR topprog OR rednatio OR sgp OR twisters OR resist44 OR tpot OR tpp'. To see what the shared objects in the political affiliation hashtags cluster are, we manually annotated the top 10 shared URLs for the biggest hashtag of the conservative faction (tcot = top conservatives on twitter) and the top 10 URLs for the biggest hashtag of the progressive faction (p2=progressives on social media). We found that the shared URLs for both hashtags are news articles and commentary on the Obama climate change plan announced in the speech from news sources and blogs mainly. We also found that conservatives share exclusively conservative sources and progressives share mainly progressive sources. Interestingly, progressives also share some conservative objects, but conservatives don't share back. [insert image] Another aspect that we looked at in the filtered political affiliation hashtags cluster around the week of the Obama speech on climate change was the user activtiy in this cluster. We found political polarisation among the users of conservative and progressive hashtags. Users in this cluster are divided into two political affiliation groups: conservatives and progressives. We found a few users that bridge between the two political clusters, which is an issue for further research.