There is a growing body of documentary evidence showing that the fossil fuel industry knew for decades that CO2 caused climate change, and subsequently cultivated doubt concerning climate science, the solutions, and who bears the responsibility for the harm. The climate sceptics networks in the US has been well documented (e.g. exxonsecrets) and subject to prior research at the DMI summer school.

This project focuses on the question if the agenda of the industry, often represented by trade associations has manifested itself in the digital sphere and in contrast know if there is a response of NGOs around this issue.Introduce the subject matter, and why it is compelling / significant.

A list of European trade associations with interest in the climate change debate according to IECA:

5. Eurometaux – The European Association of Metals

• The European Roundtable of Industrialists

• American Chamber of Commerce to the European Union

What issue language dominates the online sphere in regards to “climate change”?

In order to know the language used around the topic of “climate Change” our approach was to investigate Google as an “authoring device” (Rogers 86, 2013). First, the “Google harvest” tool was utilized to obtain the top 100 search results for the query [Climate Change]. From this data set the parent URL sites were gathered and manually edited to have an specific set, rather than pages that contained several off-topic information (e.g. News Media). This top sources were then categorized by type of site: Media, Academic, Governmental and Intergovernmental and by geographical location.

From this dataset and the knowledge of the issue expert, we analyzed the most used keywords that could be representative of the pro and con discourse around climate change in Google. The keywords were classified into two groups considering the different actors. Program keywords which include ‘clean` energy groups and NGO’s versus Anti-Program keywords, which include ‘dirty’ energy groups and trade association.

Consequently, to further investigate which party’s rhetoric is more present, we scraped the parent top 100 google sites in combination with the set of keywords for “Program” and “Anti-Program” accordingly. 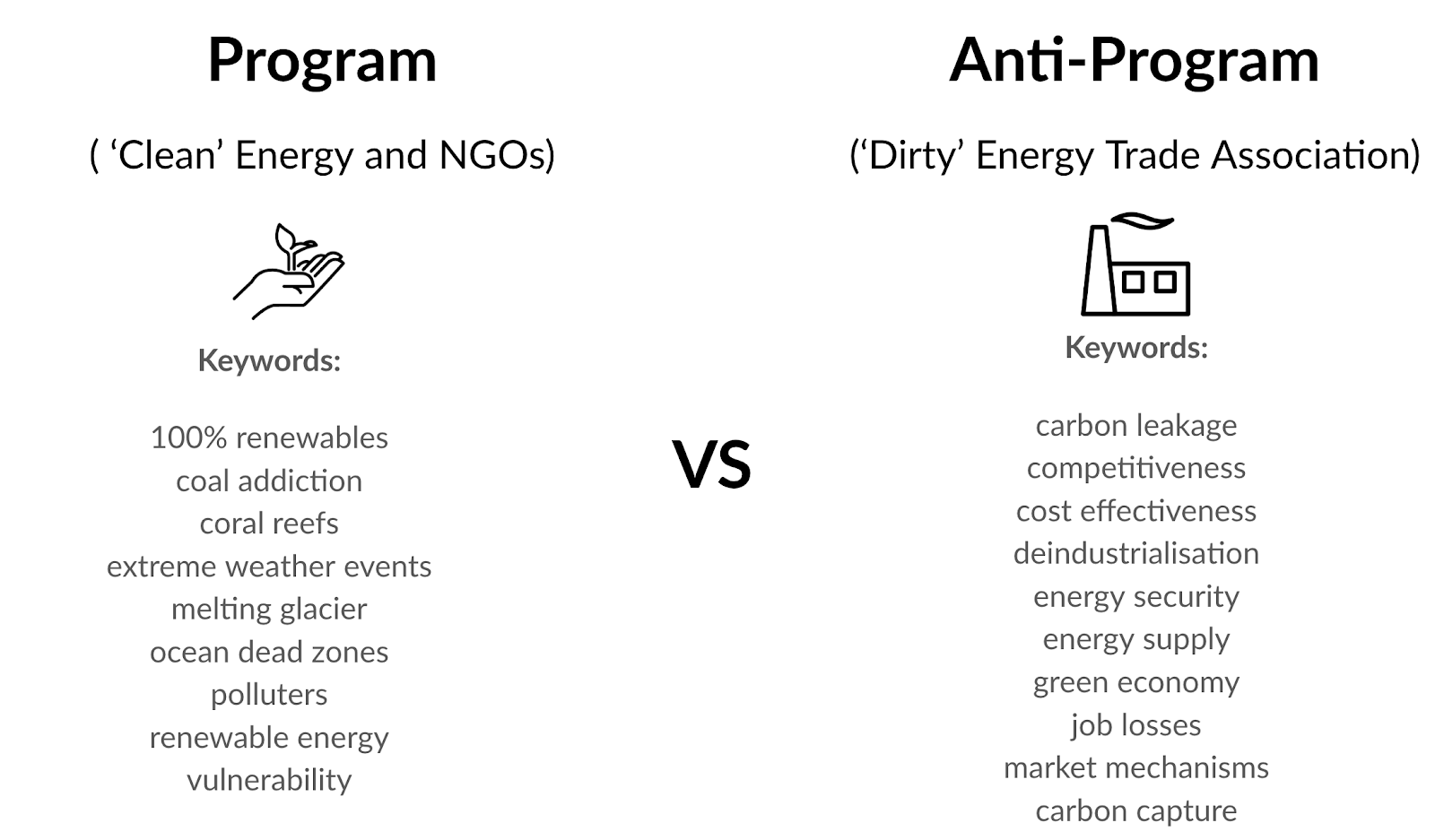 Fig. 1: The list of keywords was identified for the two actors groups in the research.

The data analyzed showed the presence or absence of Program and Anti-Program parties in Google Searches. When looking into the total hits, according to google, the keywords associated with the Anti-Program are most dominant. 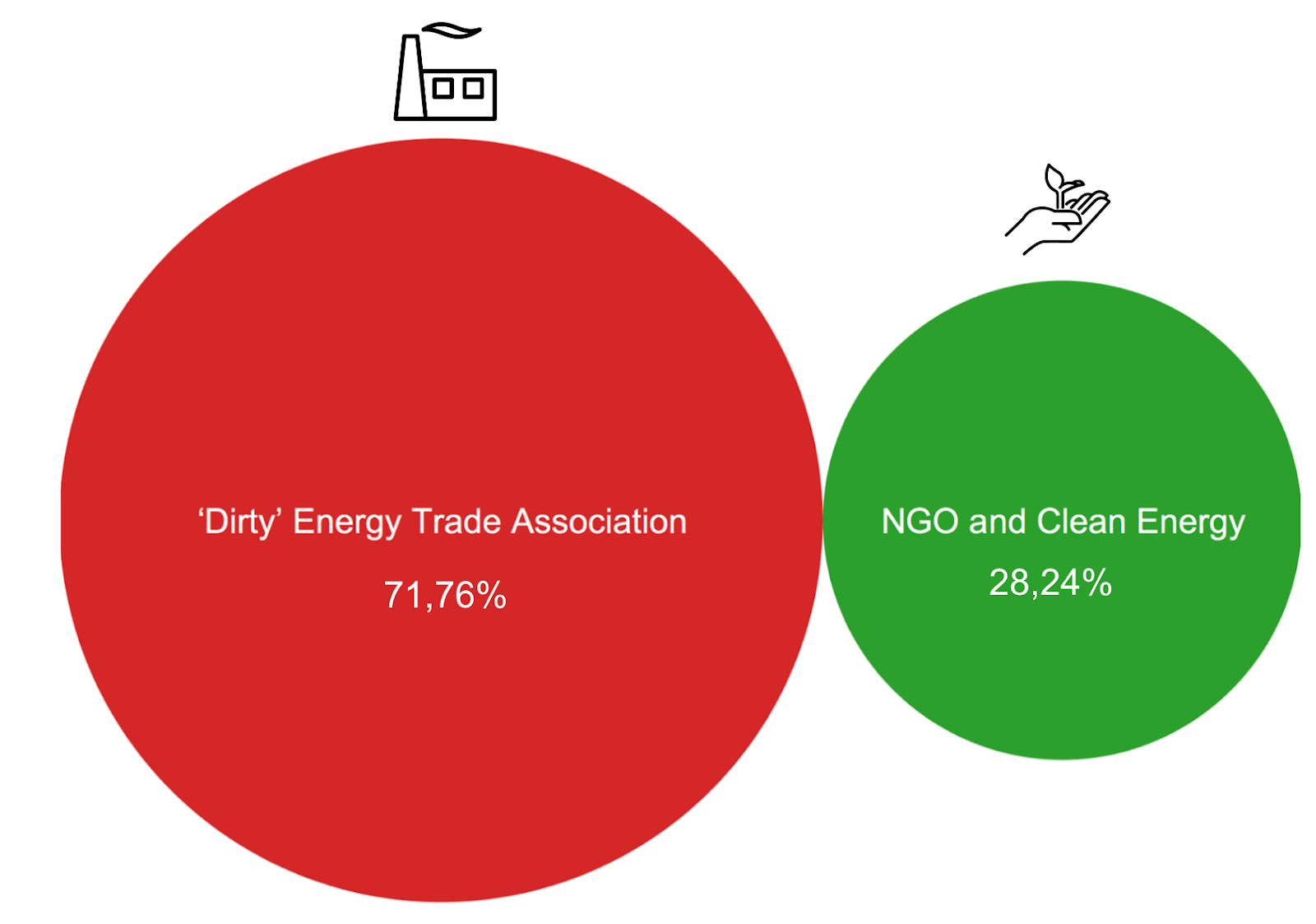 Fig. 2: Comparison of the presence of keywords from the Program (NGO and Clean Energy) and the Anti-Program (‘Dirty’ Energy Trade Association) in percentage.

Most dominant keywords for program and anti-program

Fig. 3: The most dominating keywords in hits according to Google, divided into program and anti-program.

The Program's keyword [100% renewable] has been a part of a campaign "Go 100% Renewable Energy" (see: http://www.go100percent.org/cms/). However, the hits on Google, did not indicate the expected resonance in the digital sphere. On the contrary it was among the least prominent of the Programs keywords. It is, however, related to their most dominant keyword [renewable energy]. This also seemed to be the case for the Anti-Program whose keyword [deindustrialisation], a keyword only used by the anti-program associations, was the keyword with the least hits.

Fig. 4: The least dominant keywords in hits according to Google, divided into Program and Anti-Program.

The parent sites for the top 100 query was categorised according to the expert, which showed interest for the different parent sites. This categorisation ilustrate that "national government" and "academic" sites were mostly dominated by keywords from the Program, whereas "intergovernmental organisations" and "news media" were dominated by keywords from the Anti-Program. 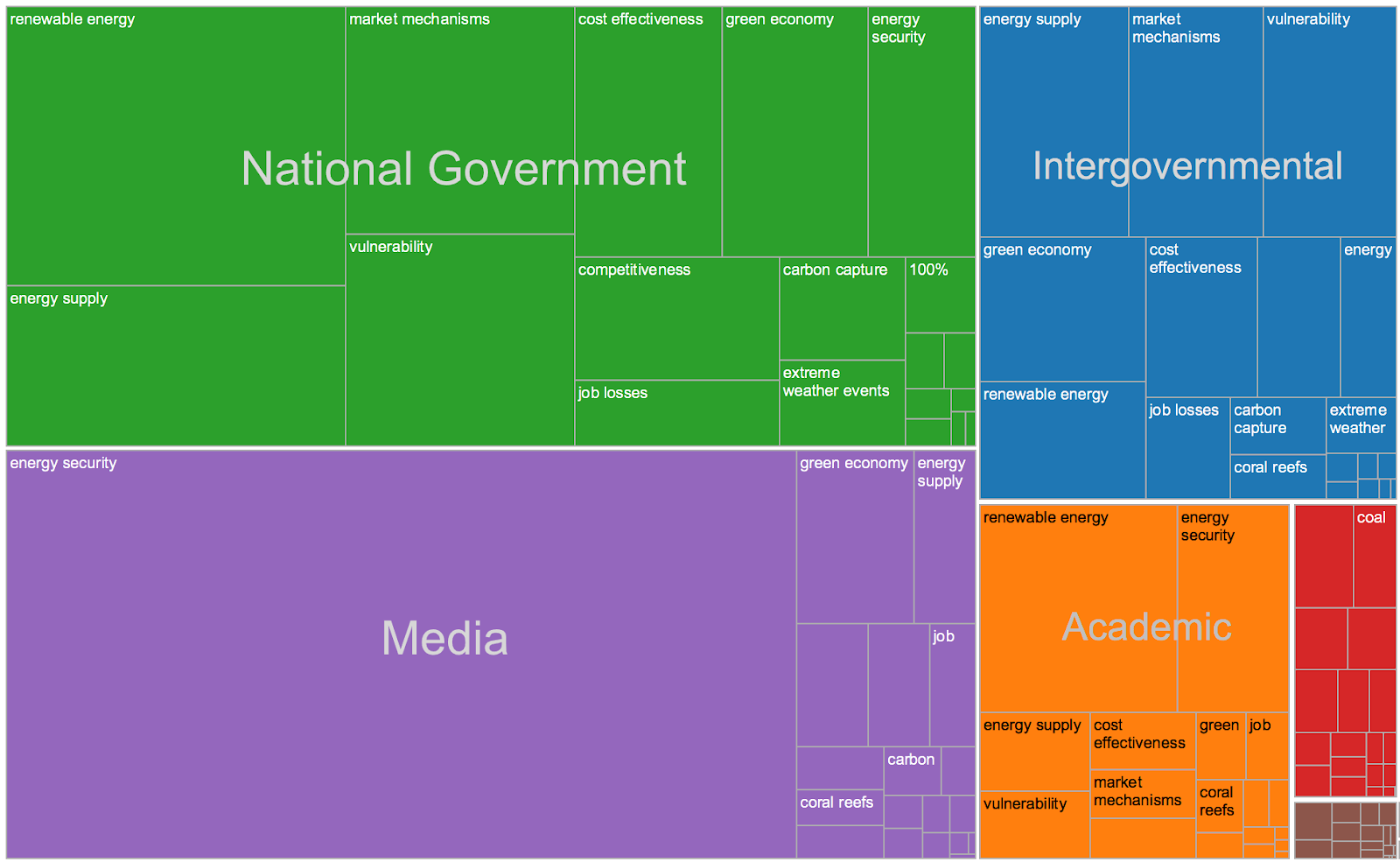 The study has investigated into what is the dominating language surrounding "climate change" on the internet, by looking at the presence of keywords from respectively NGO’s and ‘clean’ energy and ‘dirty’ energy trade associations on the top 100 sites from Google on the matter. The findings indicate that the ‘dirty’ energy trade associations keywords are the most dominant, but both the Pogram and Anti-Program are well represented, with respectively ‘energy security’ and ‘renewable energy’ as the most recurring keywords. There is however a need for further studies into defining the two actors groups’ keywords and defining parent pages for the google scraper to eradicate the possible flaws or overlooks in the research methodology.

The research’s findings should be seen in the context of process and methodology.

There are some technical challenges in this research which have created bias’ that should be taken into consideration in case of further research either building upon this research’s findings or approaching the subject scratch. The Google Scraper was set to search globally, meaning more geographically determined searches most likely will cause other sites on top 100 and other keywords will be more important. The Google Scraper also only looked at whether a keyword was present on a site or not, meaning it did not take recurrence in single websites into consideration. Changing the query settings to e.g. the standard of 100 could open up for other interpretation possibilities of the search results. Among the parent sites that have been used in the research, some some turned out to be more broad than participated, increasing the chance of keywords being used in other contexts than climate change. E.g. Washingtonpost.com had by far the most hits on [energy security] leading to the suspecion on whether the data from the site should be used in the research. The high amount of hits indicates that there was deeper access to washingtonpost.com’s archive of news articles than on other sites and that the keyword may had been occurred in other contexts than of climate change. It was, however, not possible to look further into these suspicions and thus the decision to keep the site within the dataset. The Anti-Program would still be the most dominant even without the large amount of hits from washingtongpost.com. The example of the washingtonpost.com incident shows the importance of assuring the relevance of the parent sites to the top 100 searches that will be used in the final query and the importance of understanding how the Google Scraper is working to identify and pre-actively counter such issues. An approach to accommodate to these challenges could be to divide the parent site into several sub-URL’s depending on the structure of the parent site.

Fig. 6: Showing the amount of hits washingtonpost.com gathered from the Anti-Program keywords. Further studies into this would be beneficial to determine whether washingtonpost.com should be determined as a critical error source in the dataset or if other circumstances are the cause for this significant fluctuation.