On June 1 of 2017, Donald Trump announced the US withdrawal from the Paris Agreement. As this formed a blow to a climate agreement of a historical magnitude, it also surged a call for climate action. World leaders such as Angela Merkel (German Chancellor), Paolo Gentiloni (Prime minister of Italy) and Emmanuel Macron (President of France) responded with a call to speed up and strengthen climate action and adaptation efforts. On Twitter and Instagram, campaign hashtags emerged (such as #imstillin), and Google queries peaked for both the query Paris Agreement and climate change (Figure 1). Wikipedia Paris Agreement articles were edited and the English, Russian and Portuguese Wikipedia versions even created a dedicated article to the US withdrawal. The question central to this project is what the US withdrawal did to the depictions of the issue of climate change, and whether this change is significant. 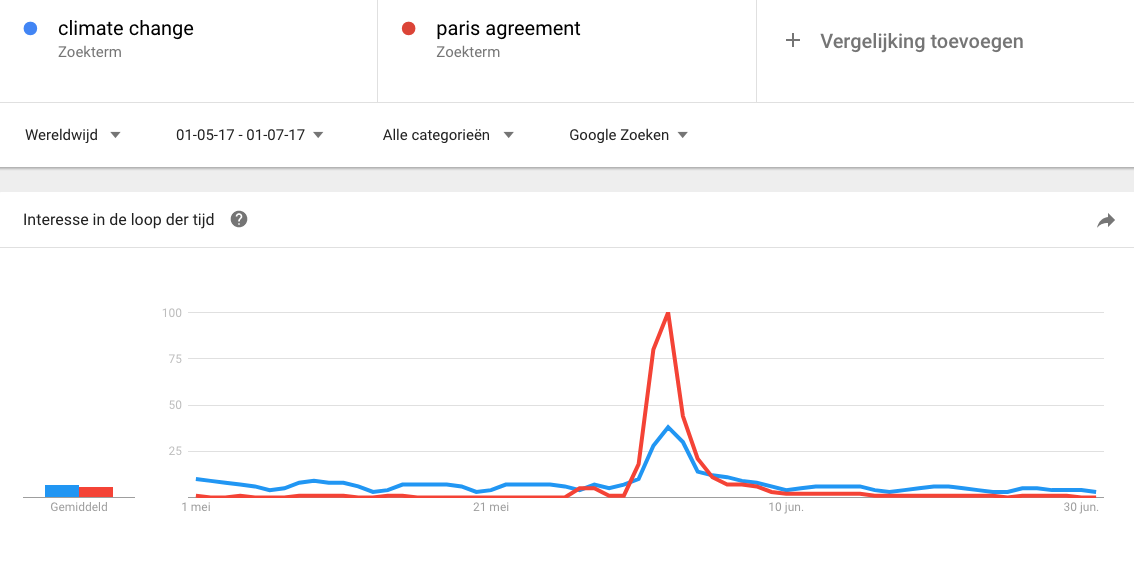 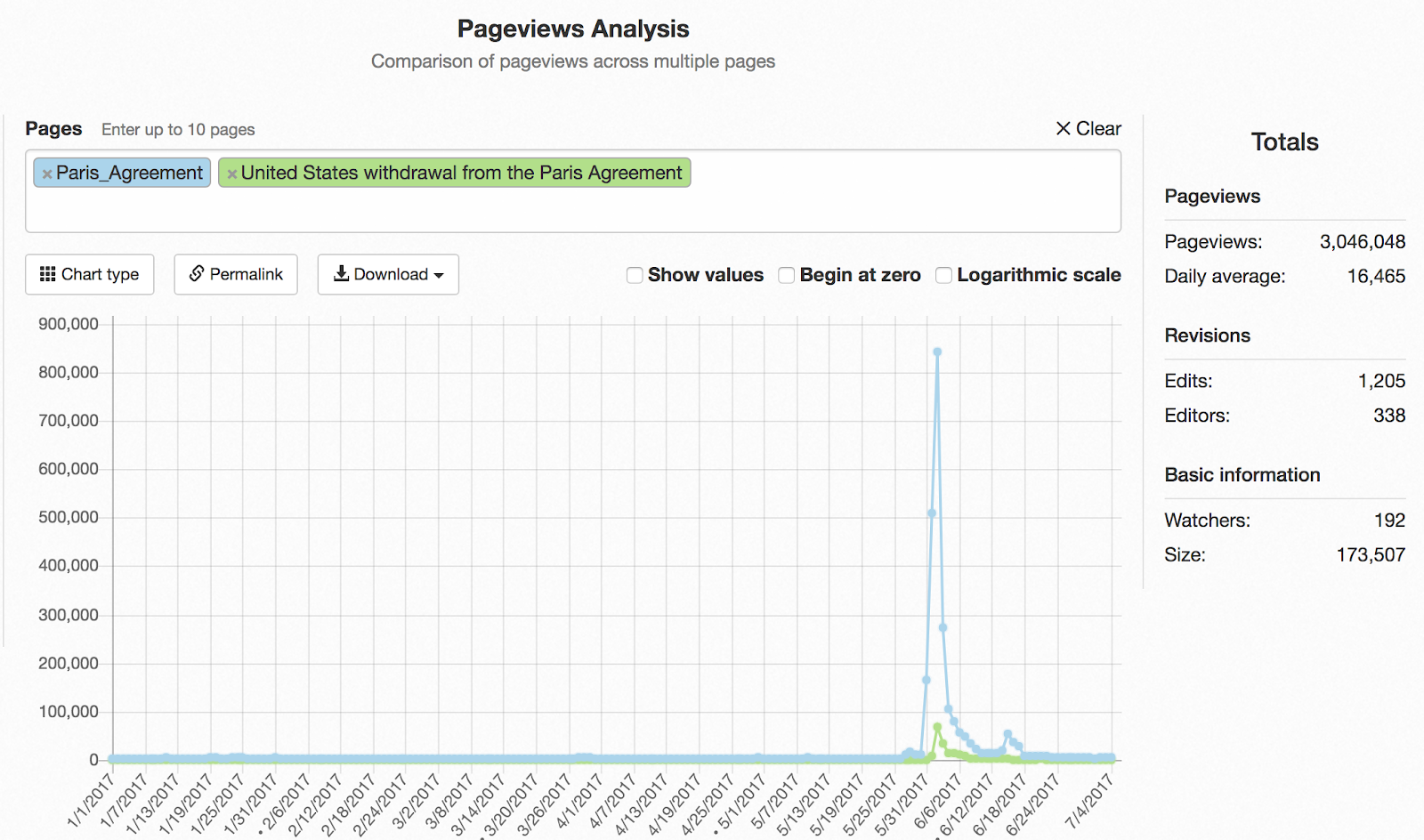 Has the depiction of climate change on various platforms changed, after Trump announced the US withdrawal from the Paris Agreement? Are these changes significant and do they vary per platform?

For the Twitter study, we used a temporal subset of TCAT’s global warming dataset which collects tweets along the following search terms: [climate], [climatechange], [drought], [flood], [global warming], [globalwarming]. For the timespan of May 29 - June 5 2017, that is three days before and three days after the US withdrawal from the Paris Agreement, we retrieved the daily hashtag frequency and the user visibility (in terms of frequency of mentions). This data was used to identify which hashtags were most used in relation to the US withdrawal from the Paris Agreement, as well as to identify influential users on Twitter during that timespan. 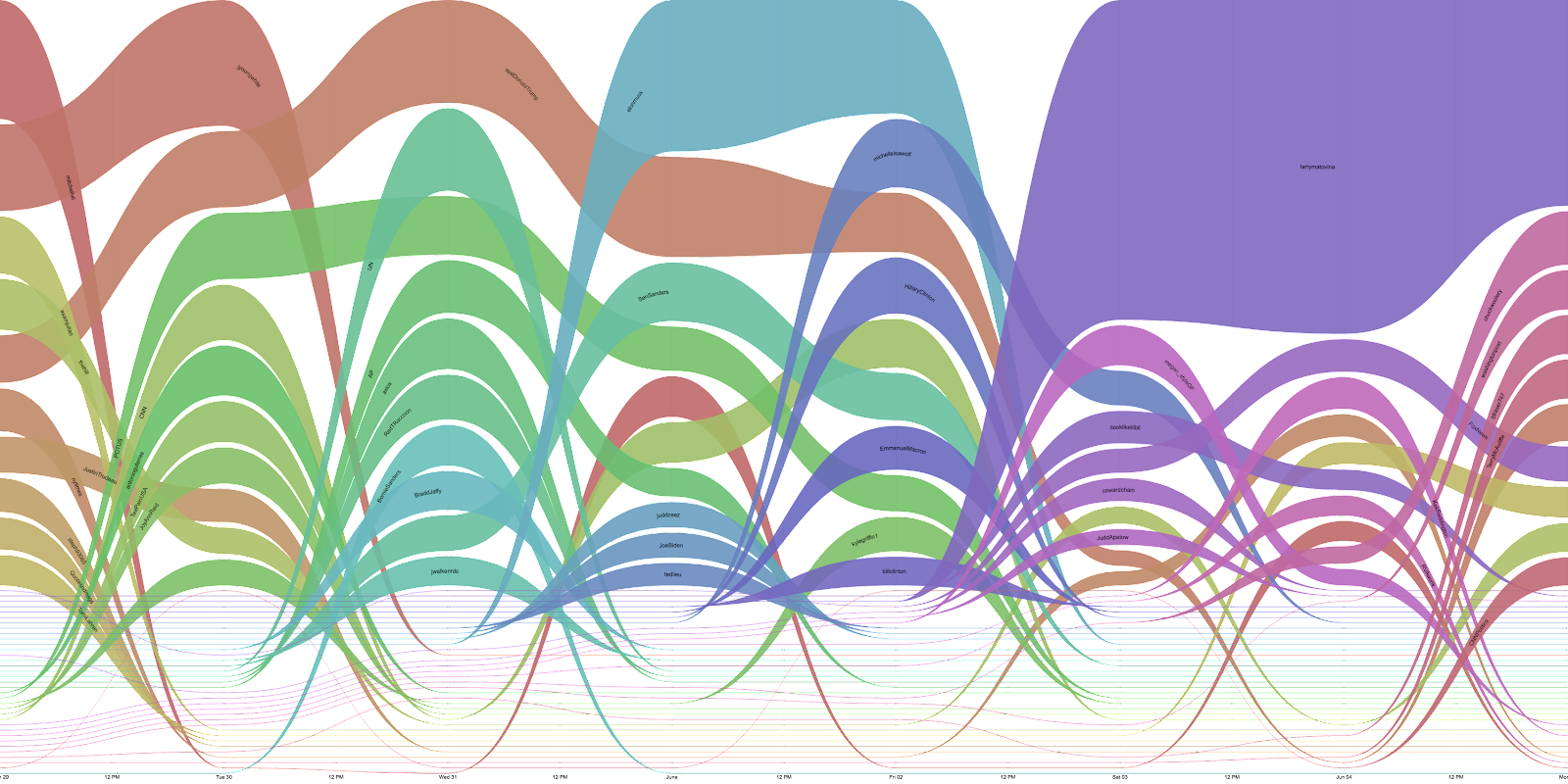 In terms of user visibility there are three main findings: types of users that are often mentioned, visibility spikes related to single viral tweets, and the alternation of critical and supportive voices in the leading up and aftermath of the withdrawal.

Examining Figure 3, it is noticeable that there are different types of users among the most mentioned ones. The largest group is constituted by political figures. Except for Emmanuel Macron (President of France), Justin Trudeau (Prime Minister of Canada) and António Guterres (Secretary General of the United Nations), all others are from the US. Donald Trump is present under both his private and his institutional @POTUS account throughout the examined timespan (with more mentions before than after the withdrawal), so is the former presidential candidate and democratic senator Bernie Sanders. Contrary to the former two, other political figures such as Hillary Clinton, Bill Clinton, former vice-president Joe Biden and various lesser known politicians (e.g. Ted Lieu, Terry McAuliffe) have spiked in terms of mentions on only one day in the dataset.

Another significant group of top mentioned users are media outlets, these include the New York Times, CNN, Fox News or the Washington Post. In addition there are a number of individual journalists being often mentioned. Among them for example Joy Ann Reid and Kyle Griffin from MSNBC, Bradd Jaffy from NBC and the “political commentator” Tomi Lahren. None of them however received significant mentions over extended periods of time, rather they were each frequently mentioned on a specific day.

Figure 3 also illustrates how a unique tweet can result in significant visibility of its author if it “goes viral”, as is the case here for the well-known entrepreneur Elon Musk (see Figure 4) and even more so for Larry Matovina, the editor of a video gaming platform (see Figure 5). While Elon Musk has 9.83 million followers, Larry Matovina only has 7.684, yet his tweet was shared 400.000 times. This exemplifies that having a large number of followers is not a prerequisite for significant visibility on Twitter. 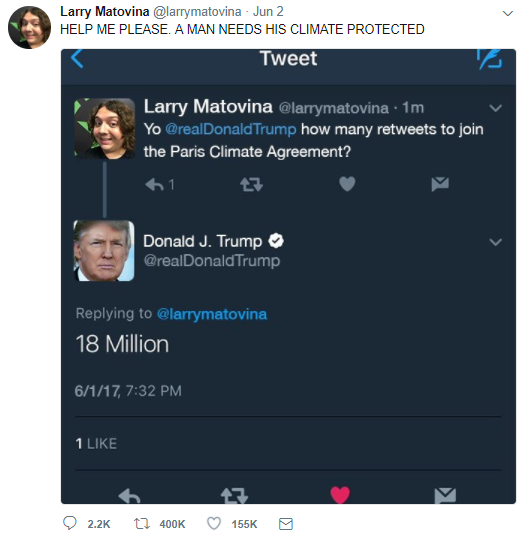 Lastly, the user visibility graph (Figure 3) shows how days ahead of the withdrawal the leading users were voices in support in Trump while with the announcement of the withdrawal, critical voices are dominating the conversation. After a few days Trump supporters are regaining prominence, as evidenced by a rise of Fox News and the alt-right troll @KekReddington (Figure 6). 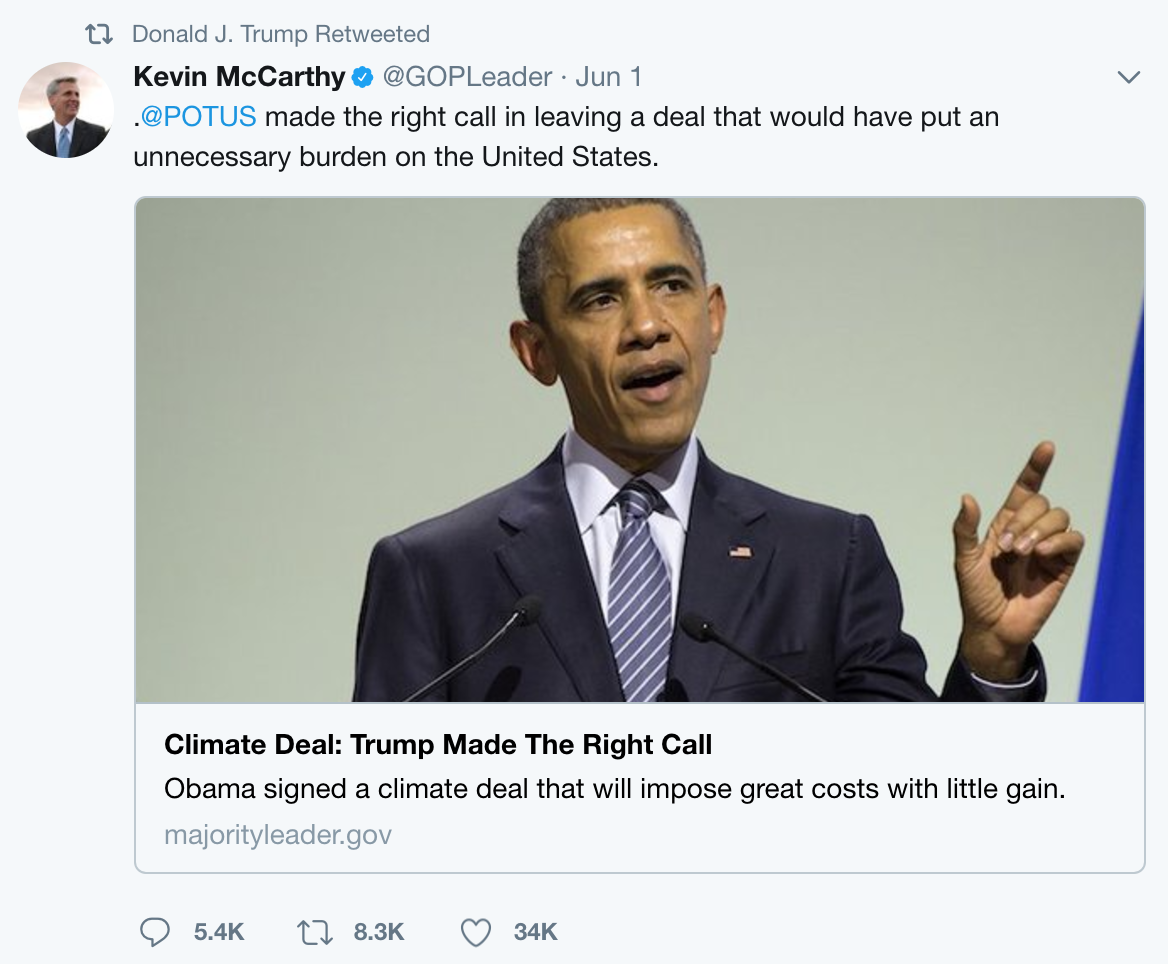 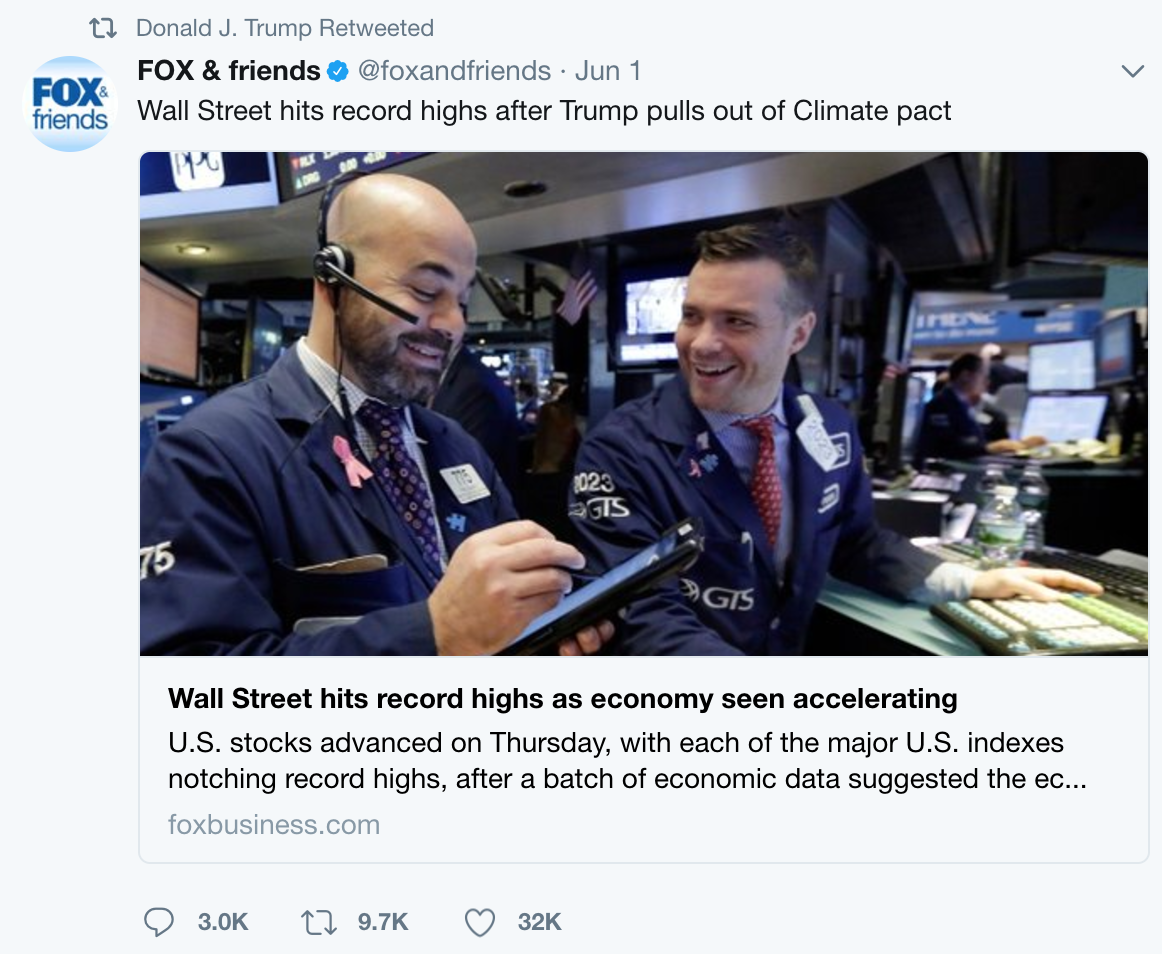 For Wikipedia, we operationalized the research question to asking how the announcement of the US withdrawal from the Paris Agreement resonates in Wikipedia articles.

After some exploratory work, we decided to focus on the 20 biggest language versions of Wikipedia, according to the number of articles (see list: https://en.wikipedia.org/wiki/List_of_Wikipedias), and from these versions collect the articles that mention the US withdrawal.

After testing several queries, we decided upon the search terms “Trump” (referring to the decision of the US) combined with “Paris” (referring to the agreement) - without quotation marks. We needed to translate the search terms in the language of the 20 different versions (see the result file). For every language, we took a maximum of five articles from the result list which referred to the US withdrawal of the Paris agreement and put them in a spreadsheet (language, title, translation). Difficulties like the multi-use of the search term “Paris” (referring also to other events or persons like Paris Hilton) or the conjugation of the search term needed manual control and clearing up of the search results. Only the versions in English and Japanese reached the result of five (or more) articles. 5 of the 20 language versions didn’t mention the US withdrawal (Cebuano, Italian, Polish, Ukrainian, Waray). Because this “non-information” is also an information, we decided to mark those languages in our database with “no match.”

To make the articles comparable, we decided to cluster them across languages, contextualising them in some meta-groups like articles about the US withdrawal, the article on Donald Trump (as a person), articles about the Paris Agreement, movements against Trump (and some smaller ones). Taking the perspective of a user, browsing for information about the US withdrawal in Wikipedia, we found it important to rank the found articles among their ranking in the search results. So every found articles has a ranking value between 1 and 5. This resulted in the graph 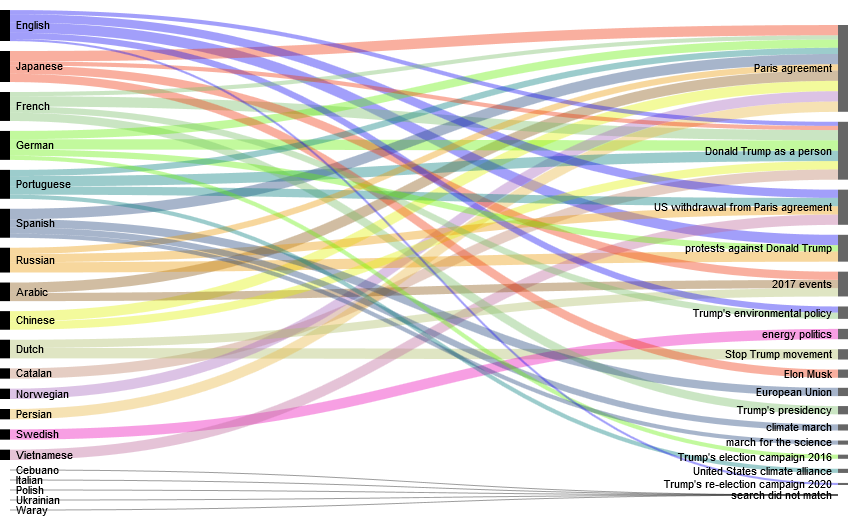 Figure 7: Streamgraph showing the quick overview of where the US withdrawal from Paris Agreement is mentioned in Wikipedia, across the 20 largest Wikipedia language versions.

The results of this resonance analysis can be seen in Figure 7. On the left, the 20 largest language versions of Wikipedia are listed, ordered by the number of times they refer to the US Withdrawal. Five language versions - Cebuano, Italian, Polish, Ukrainian and Waray - do not contain any coverage of the US withdrawal from the Paris agreement.
On the right hand side is the categorization of the articles that match the query “Trump” and “Paris”, which was neccesary to enable a comparison of the results across language versions.
The thickness of the line refers to the rank of the search result within Wikipedia (e.g.: For the French Wikipedia, the thickest line goes to the article on the person of Donald Trump, so this article was ranked as the first result in the French Wikipedia).

Next, we used a different method to detect mentions of the withdrawal in Wikipedia (implemented in Java):

First, we needed to clear up the database, sorting out the paragraphs that are in the search results but don’t really talk about the US withdrawal (for example because the link to other agreements concluded in Paris, or are about the obsolete ratification of the Paris agreement by the USA).

With the remaining paragraphs, we visualized a network of articles mentioning the US withdrawal, including all language versions.

Types of articles mentioning US withdrawal

For showing the types of the articles of the sample, we coded the articles mentioning the US withdrawal according to the following scheme:

The result in a quick graphic: 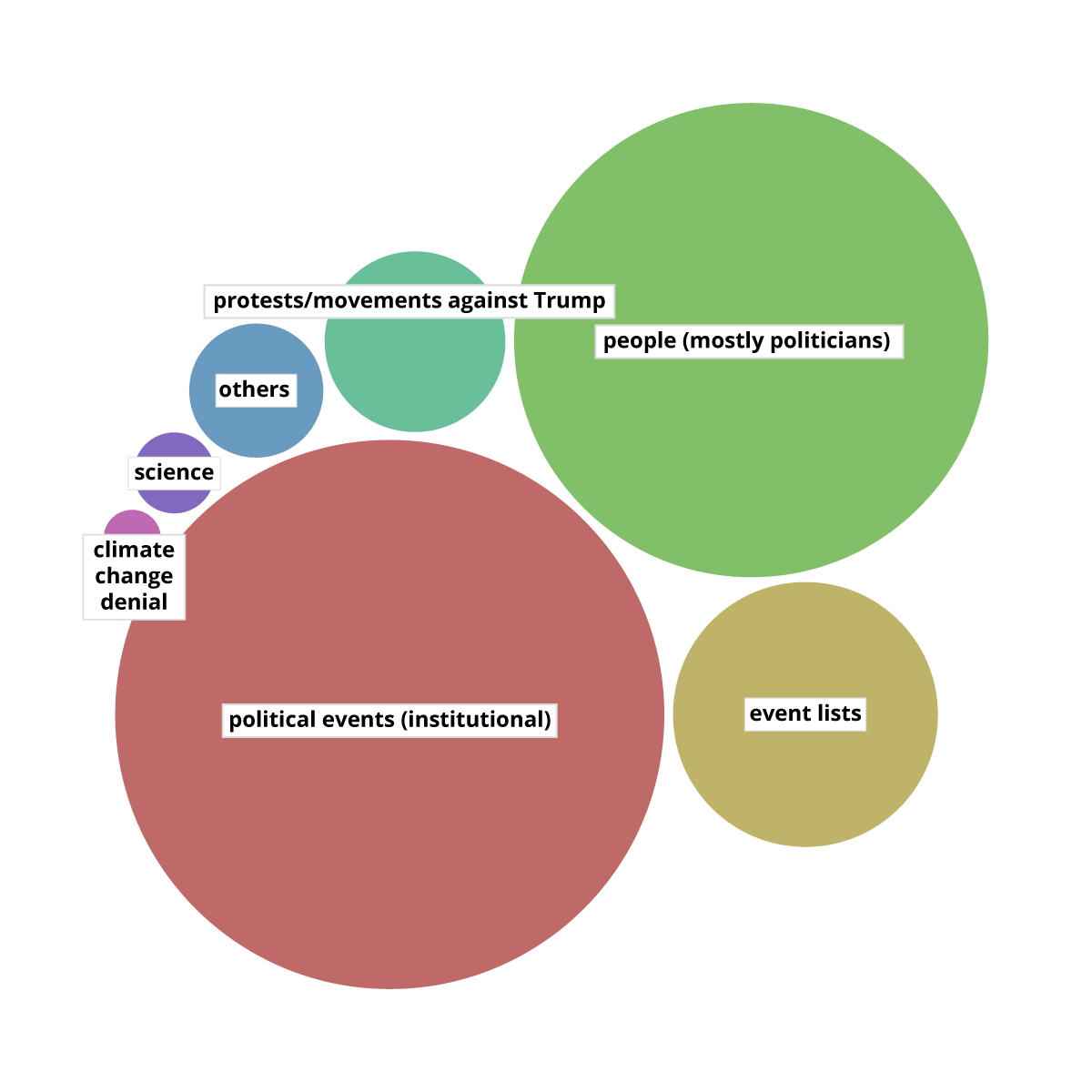 We then separated the categories per language. The result is shown in this graphic: 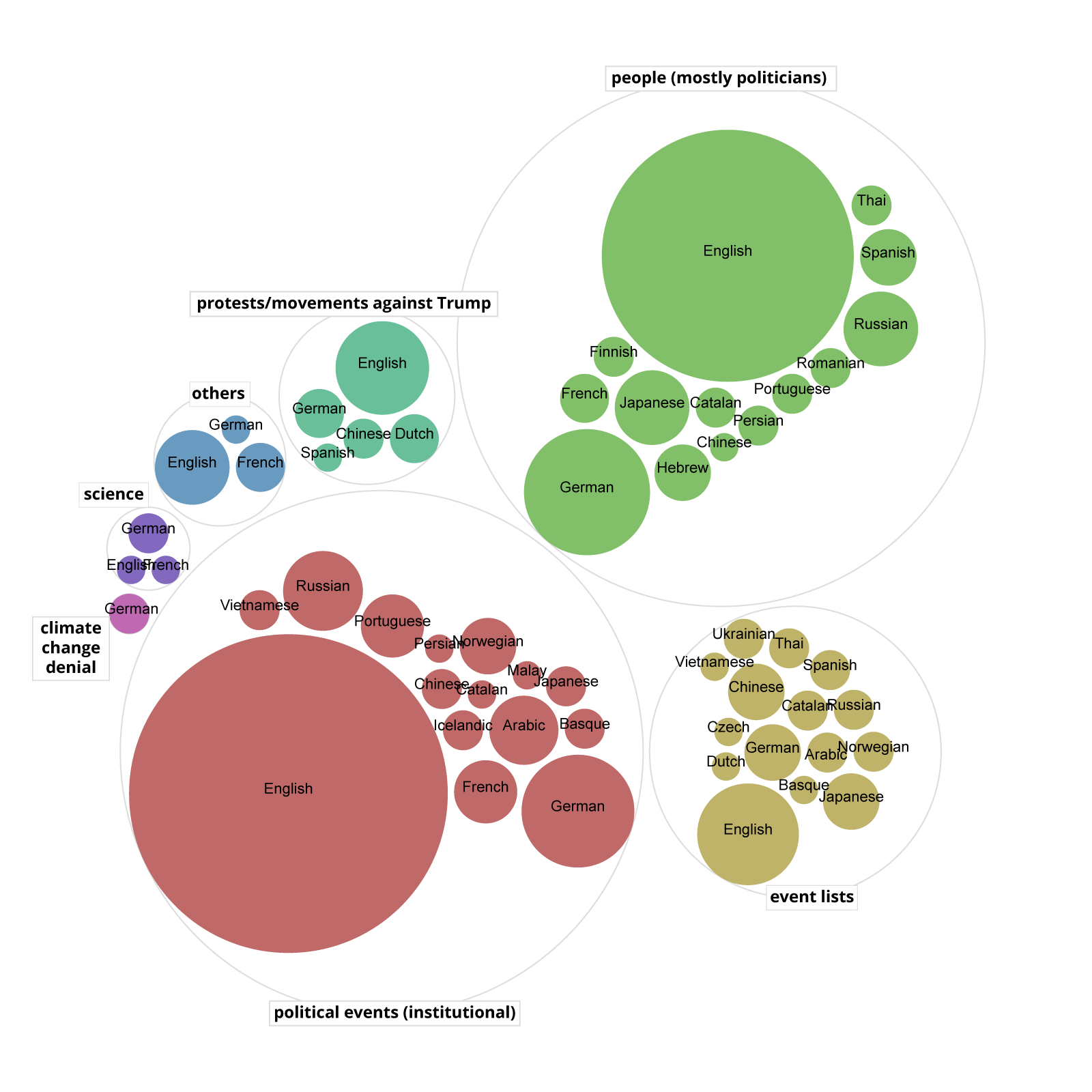 With the help of the remaining paragraphs we have also been able to gain insights into the perception of the US withdrawal across languages: We created word clouds for the paragraphs in selected languages (after removing words frequent in the respective language (lists here)).

Findings: The English word cloud contains words as “oil” and “coal”, the German and Dutch mainly refer to critique (“Kritik”, “weerstand”), and the French one contains climate aspects (“planète”, “èmissions”).

By automatically iterating through the revisions of a Wikipedia page (example API call) and extracting the images used within them, we were able to create a timeline depicting the evolution of images that were present on the respective page over time.

Example for the English “Climate change” page, showing how images were removed, added and replaced over time: 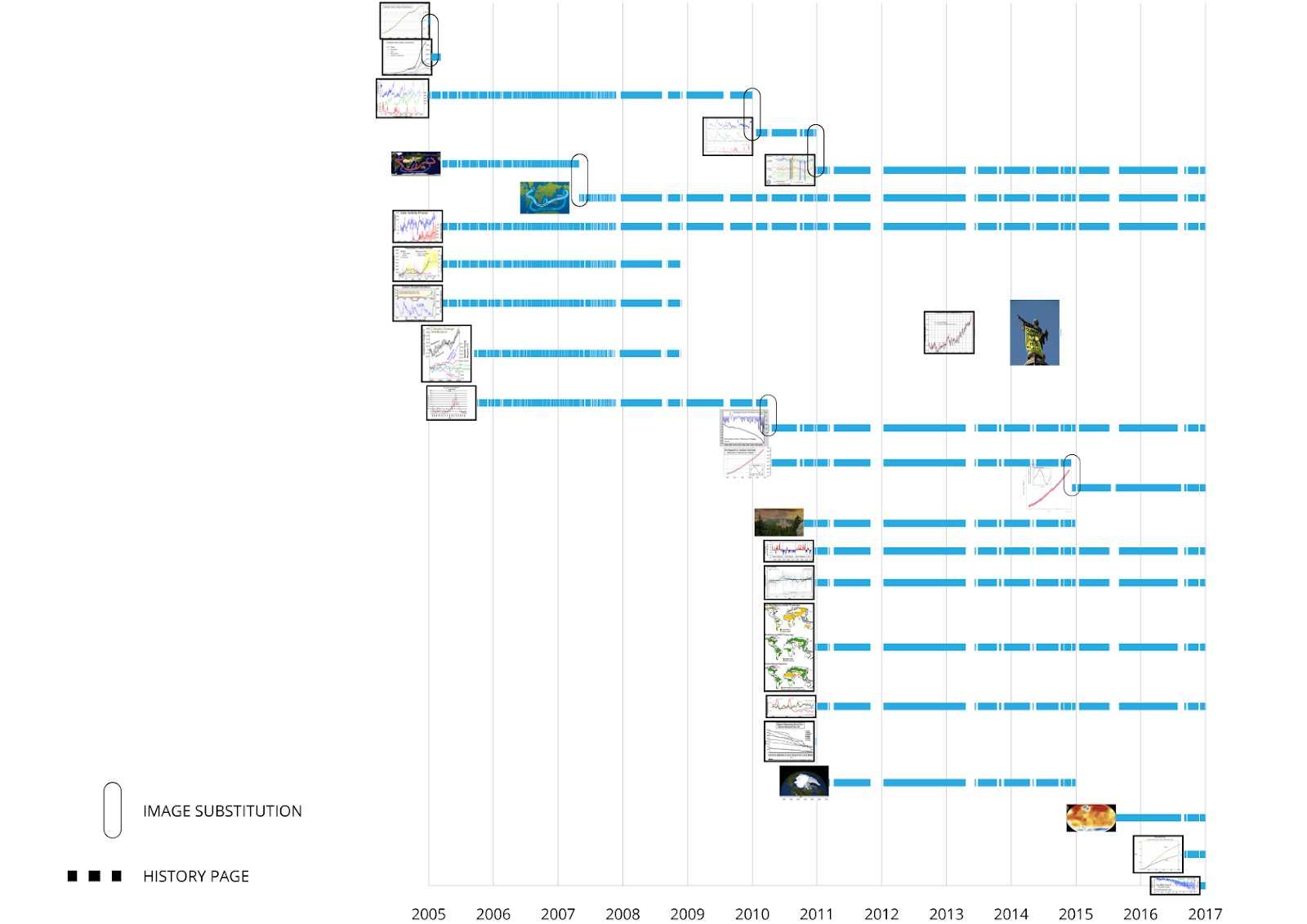 Images on Wikipedia: Images added after the withdrawal

To observe the impact of the US withdrawal from the Paris agreement on the images, we have compared the images present before the decision became expectable (May 25th) to those which were added afterwards, using the same methods as for the image evolution.

We collected the images present between Jan 1st, 2017 and May 25th, and those added after May 25th from the following pages:

Selection of images before and after:

The results show that there were no additional photos added to the pages, but several diagrams were added, some of them depicting the impact of the United States on the global climate.

This network shows the interlinking images with the language versions where they are shown. 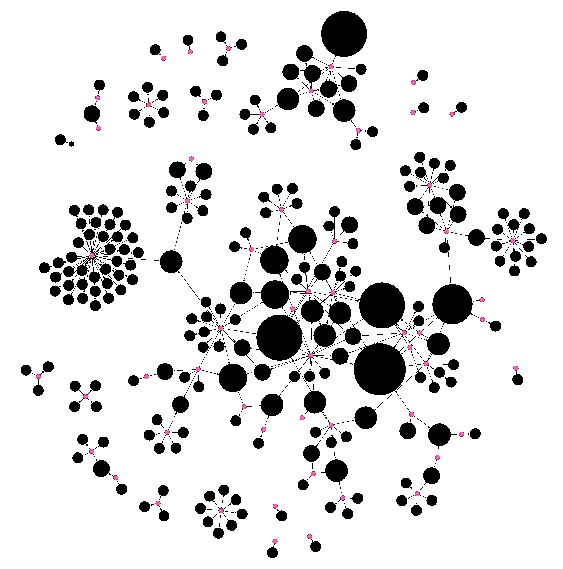 Data collection on Instagram is carried out through Visual Tagnet Explorer and is limited by the constraints of the platform API. It is not possible to collect data ‘live’ via a streaming API (as is commonly done on Twitter). Neither is it possible (since June 2016) to request data for a hashtag between particular timestamps. The only means of hashtag data collection is to send a request on a single hashtag, fetching up to (approximately) 20,000 posts back in time from the current date. The time period covered by such a request depends on the popularity of the hashtag.

The Week 1 climate change project (insert URL link) demonstrated that #climatechange is a very frequently used hashtag on Instagram: data collected on June 26th only appeared to fetch reliable data as far back as June 10th (although it did fetch very sporadic posts as far back as 2012). To answer the research question, we need Instagram data from a period before and after the announcement of US withdrawal on June 1st. Therefore, we looked for alternative, relevant hashtags to query Instagram for. We did this using relevant hashtags co-occurring with #climatechange in the week 1 Instagram dataset. These were then checked directly on the Instagram platform, which displays the total number of posts on a particular hashtag. #parisagreement was selected because: i) it is directly relevant to the research questions; and, ii) it appeared to have a more manageable number of posts (31,850, compared to 681,814 for #climatechange): 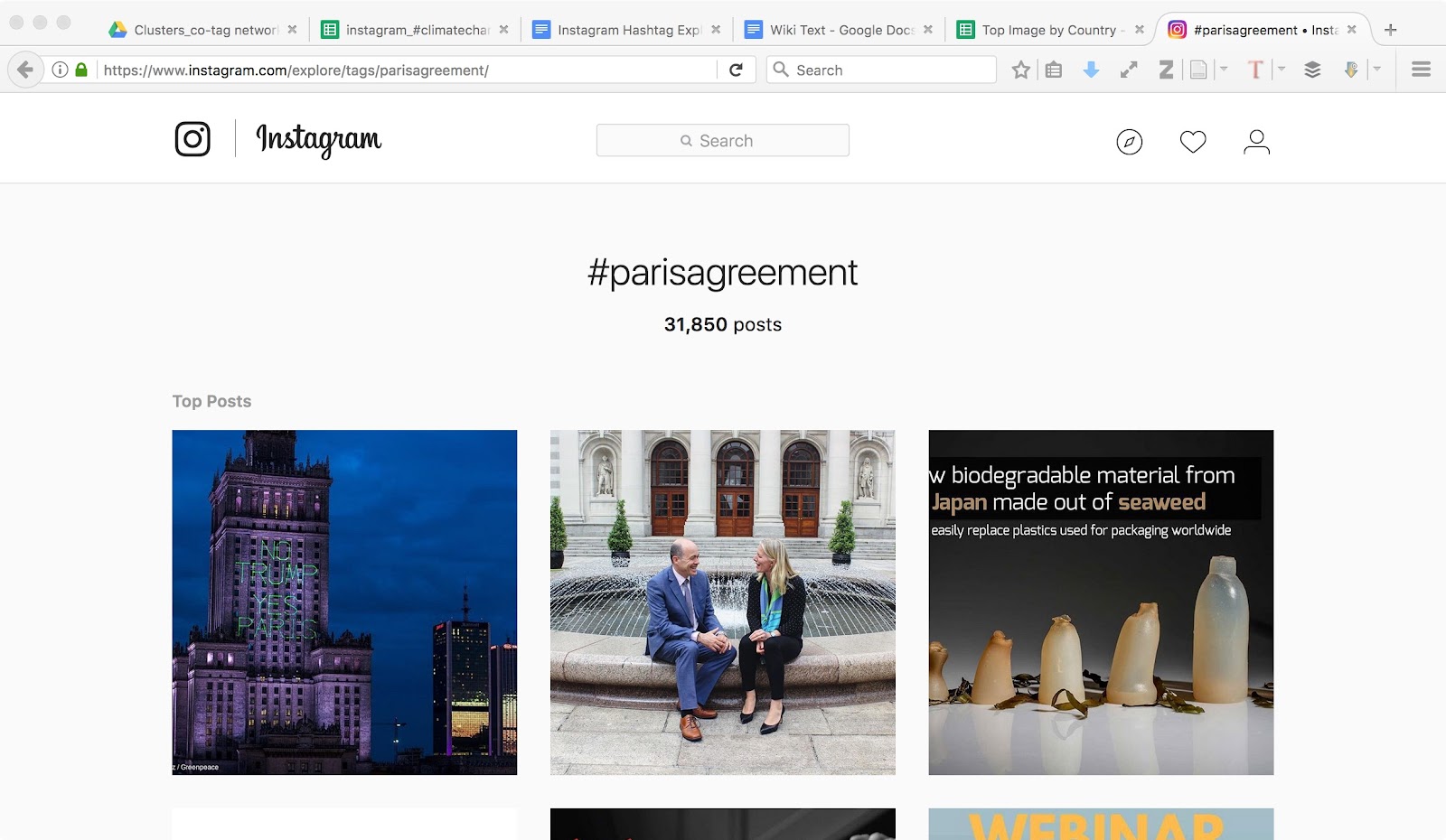 We queried Visual Tagnet Explorer for #parisagreement and the maximum number of iterations (100, equivalent to a maximum of 20,000 posts), and collected 17,320 posts. The data appeared to be reliable going back prior to May. In order to address the research question, we focused on the period May 1st - June 31st, 2017.

We analyzed qualitatively the first 400 data from Instagram, in relation to the number of likes. The data has been categorized according to their general meaning and we considered both the content of the images and the verbal text that accompanies them.

The identified categories show clearly what people do with Instagram when they want to intervene in public discussion on climate change and the US withdrawal from the Paris Agreement. Each category contains a different type of post, shared for several reasons.

The categories identified are: