Part of Apps and Their Stories: Volatility, Diversity, Policy

Studying Apple App Store Review Guidelines and Google Play Developer Policy Center, we developed three different approaches in order to contextualise the amount of data we had collected during our research. Firstly, we focused on the word counts, which showed us to what extent the documents have been getting longer over time, currently having about 11.000 words respectively. Secondly, we visualised the formatting and the textual changes within the policy documents, which revealed when the documents have been most edited, highlighting the overall evolution of the app stores' policies. However, in order to focus only on the textual additions to the texts we also compared the tables of contents, which helped us to explore how the documents have responded to the new changes in law, such as COPPA and GDPR. Additionally, we close-read the sections 'Introduction' and 'Conclusion' in Apple App Store Review Guidelines from 2010 to 2019, which showed Apple's emphasis on the user experience over the developer experience and it highlighted how Apple gradually removed the notion of the Review Board from its document.

As the global downloads across iOS and Google Play surpassed 113 billion in 2018, with the average smartphone user in the United States spending nearly 3 hours each day in apps (App Annie), the study of apps offers more data for an analysis than ever. With the project 'Apps and Their Stories' being divided into three sub-projects - volatility, diversity and policy of applications - we decided to focus on policies which the app developers need to follow in order to get their app successfully released on either Apple App Store or Google Play. Through this project, our main goal was to explore the evolution of these policies and consequently contextualise these changes. As Apple states, 'apps are changing the world, enriching people’s lives, and enabling developers (...) to innovate like never before' (App Store Review Guidelines, 2019), with Google Play adding that with this innovation, however, comes 'responsibility' (Developer Policy Center, 2019). Doing both quantitative and qualitative research, we aimed to look into how Apple App Store and Google Play set boundaries in order to ensure that the developers remain 'responsible' when designing the apps.

An app is an abbreviation for any application program, at least from a programmer's point of view (Fagerjord, p. 93). However, within the context of everyday life, an app is a small program for a mobile device, downloaded from a central distributor, an app store (Ibid). In comparison with a Web browser, an app is a short-cut that guarantees direct and immediate access to the information stored in a database on the cloud (Matviyenko, pp. xvii-xix). Since it is much easier to access services on mobile devices from apps rather than from browsers, the demand for effective apps has been steadily growing as every user needs many apps to get the most out of his mobile device (Fagerjord, p. 91). The industry of mobile apps significantly changed between 2006 and 2008 with the introduction of the first wave of smartphones and the possibility of broadband connections (Feijoo et al, p. 213). When Apple consequently introduced a new iPhone in late 2007, combining touch screen, motion sensor, enhanced display etc, the app market was changed forever (Ibid). The role of developers, however, was still rather limited as it was only possible to develop application within the platform (Ibid). But this evolved between 2008 and 2011 when the developers became the main engine in mobile software innovation, with the suppliers, platform and network operators competing to build strong developer communities ever since as their success is measured in terms of the number of applications and downloads (Ibid). On July 10, 2008, Apple introduced its own App Store that contained not only 'first-party' applications developed by Apple, but also apps published by third-party developers (Dieter et al, p. 1). Google reacted by launching Android Market on October 22, 2008 - later being rebranded as Google Play - and offered apps designed for the Android operating system (Ibid). In 2010, Anderson and Wolff declared the death of the World Wide Web as the apps, offering simpler, sleeker services, were more about 'the getting' rather than 'the searching' and thus attracting more and more users (Anderson and Wolff, 2010). Indeed, since its beginnings in 2008, the app economy has become a billion-dollar global industry (Dieter et al, p. 14). Apps are so thoroughly insinuated into everyday life, they are often imperceptible: we seamlessly chat, take pictures, listen to music, play games, check our bank balance, and so on, without any moment of reflection (Ibid). The increasing demand for apps has consequently lead not only to more creative ways in developing them, but also to new policies which developers need to follow in order to get their apps released. Many scholars have published articles on the app phenomen, focusing on topics such as policy and mobile advertising (Evans, 2016), separately examining the Google Play developer policy (Kywe et al., 2016) and the Apple App Store policy (Hestres, 2013), or comparing platform ecosystems of Google and Microsoft (Angeren et al., 2016). However, none of the studies has directly focused on the developer policies of Google Play and Apple App Store and has not contextualised their evolution from their early beginnings in 2008 up until now, to 2019 respectively.

We were provided with the latest versions of App Store Review Guidelines and of Google Play Developer Policy Center. From there we conducted our research using Wayback Machine in order to explore how the developer policies have changed over time in both Apple App Store and Google Play. We established, scrapped and collected all the data between January 08-10, 2019.

We hypothesized that Apple App Store would have more regulations regarding the process of developing an app, while Google Play would present itself rather 'moderate' with its policy documents. We also believed that the length of the documents would change over time as more regulations have been added, including the latest changes in law, specifically with the EU General Data Protection Regulation (EUGDPR) from May 2018 (EUGDPR Information Portal, 2019). However, we were unsure to what extent the policy documents would potentially get denser.

5.1. Establishing and collecting the material

5.2. Comparing the versions and curating the collected material

5.3.2. The formatting and textual changes within the documents over time

6.1. The length of the compared documents over time

6.2. The formatting and textual changes within the documents over time

6.4. Relation between the OS releases and the updates in policy documents

6.5. The evolution of sections 'Introduction' and 'Conclusion' in App Store Review Guidelines

We were not surprised to find out that over time the developer policies have been getting longer, now being established on more than 11.000 words per document for both Apple App Store and Google Play. However, it was interesting to see that although now both of the documents are similarly extensive, that was not always the case. In 2010, Apple's policy was significantly longer, having about 3.000 words, while back then Android Market had less than 1.000 words and was not so detailed. The structuring of Apple's policy was clear, including a table of content which helped to find specific sections. Google, on the other hand, was so short that it did not even introduce its table of content until much later. Therefore looking at these differences in the early beginnings of the app stores, we conclude that Apple realised the importance of developer policy earlier on, being very specific and even more restrictive compare to Google Play, which started putting the same emphasis on developer policy significantly later. Moreover, in the case of Apple App Store, we detected changes within the policy documents that took place around the same time as new releases of Apple's iOS systems. We thus deduce that Apple's App Store is closely tied to Apple's iOS. However, doing the same comparacion with Google Play, we saw almost the opposite, with Google Play adding new changes to its developer policy documents independently on the launches of its operational systems. In our opinion, Google's app store then functions more as an independent app store compare to Apple App Store, which is partially shaped by the releases of Apple's other products. Looking at the formatting and textual changes within the documents over time, we assume that Apple generally updates its policy more often than Google Play. Further comparing the tables of contents of both Google Play and Apple App Store, we contextualised the specific changes with the modifications of other laws outside the companies - such as the revision of the GDPR; or we linked them with the increasing number of young children downloading apps - like it was the case of Google Play in July 2017. This suggests that compare to the early beginnings from 2008 to 2011, when the policy documents were more focused on the demands from the specific app stores on the developers, recently the documents have been also subjects to the influences and changes from outside. Lastly, we were surprised to learn to what extent Apple puts emphasis on the user experience over the developer experience in their policy documents. Whereas in the beginning, Apple started its document by saying how pleased they are that the developers want to invest their talent to develop an application for iOS, it gradually started highlighting the importance of the user experience, demanding the developers to deliver an app that would surprise, delight and excite the users. Although Google Play also asks the developers to create safe apps, their policy document is more focused on the developers rather than the app users. This suggests that overall, Apple focuses more on users and usability while Google is aware of the importance of developers and consequently pays more attention to focusing on them in the policy documents.

Our research used digital methods in order to reflect on the evolution of changes within the policy documents of both Apple App Store (Apple App Store Review Guidelines) and Google Play (Google Play Developer Policy Center). We contextualised the collected data and showed how the app stores have been reacting not only to changes within the companies but also to new laws outside of them. Whereas in 2008 the app stores were slowly navigating themselves through the new field of market, more than ten years later they are aware of the increasing demand for apps and react to this in their policy documents addressed to the developers, who have the responsibility to design a safe but exciting app. For future research, we would suggest to focus more in detail on specific sections within the policy documents and explore how they have changed over time - such as the evolution of gambling policy in Google Play or 'Human Subject Research' section in Apple App Store. Furthermore, it would be interesting to study the links from the documents in order to see how the app stores interlink the policy documents with other instructions for the developers and thus elaborate on the overall helpfulness and effectiveness of these documents.

Note: All the graphs disclosed below were designed by Sofia Chiarini based on our collected data. 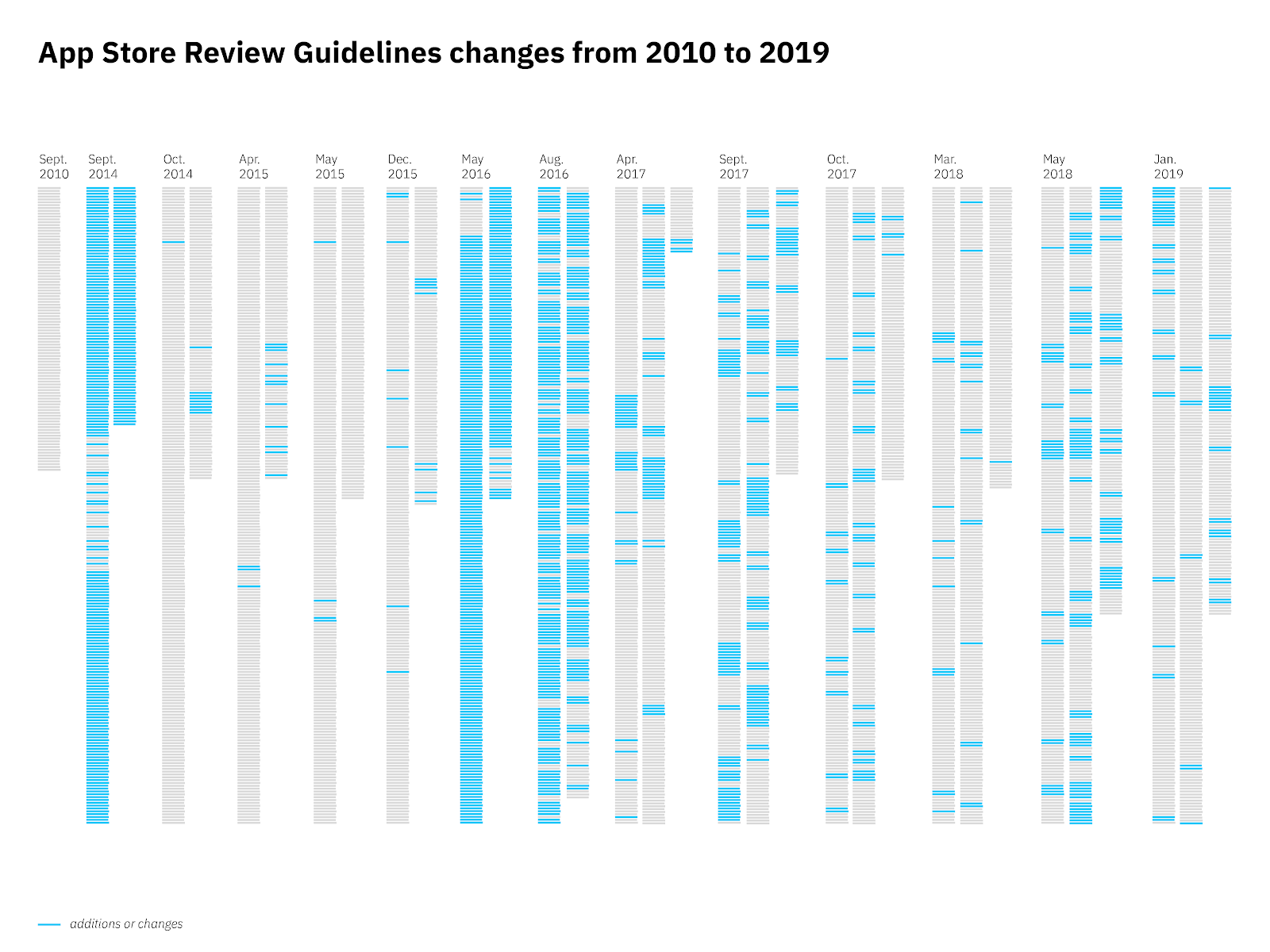 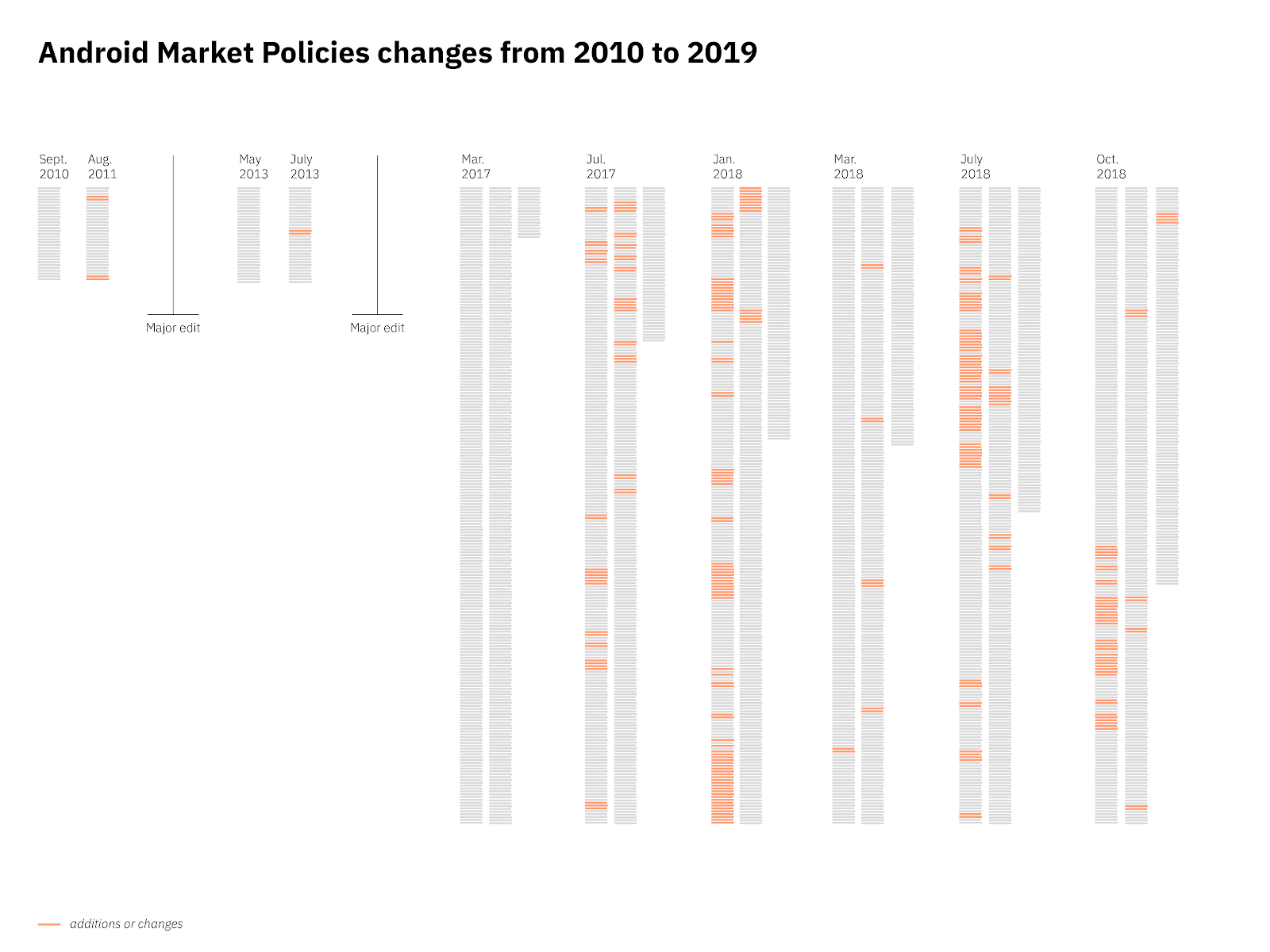 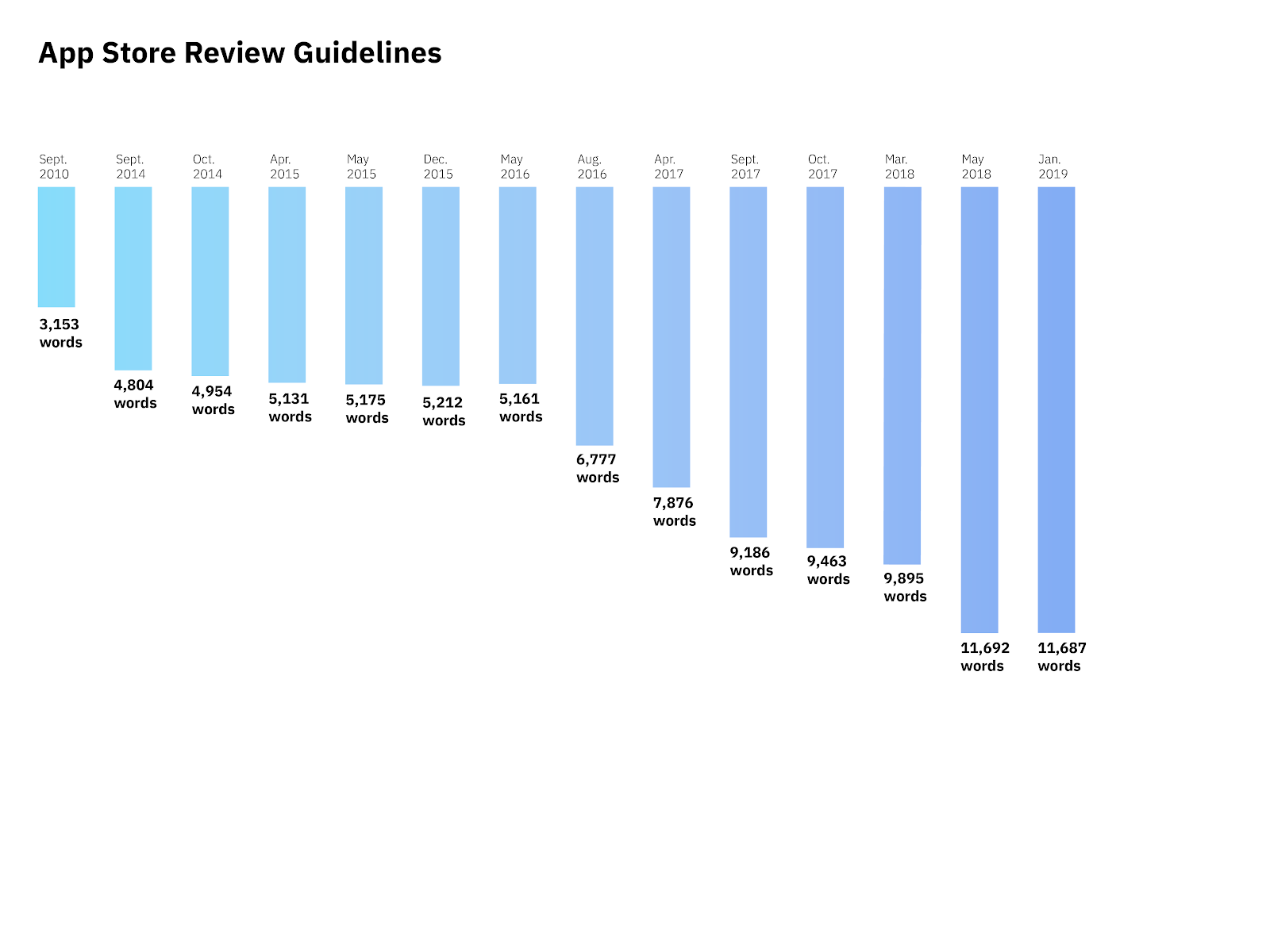 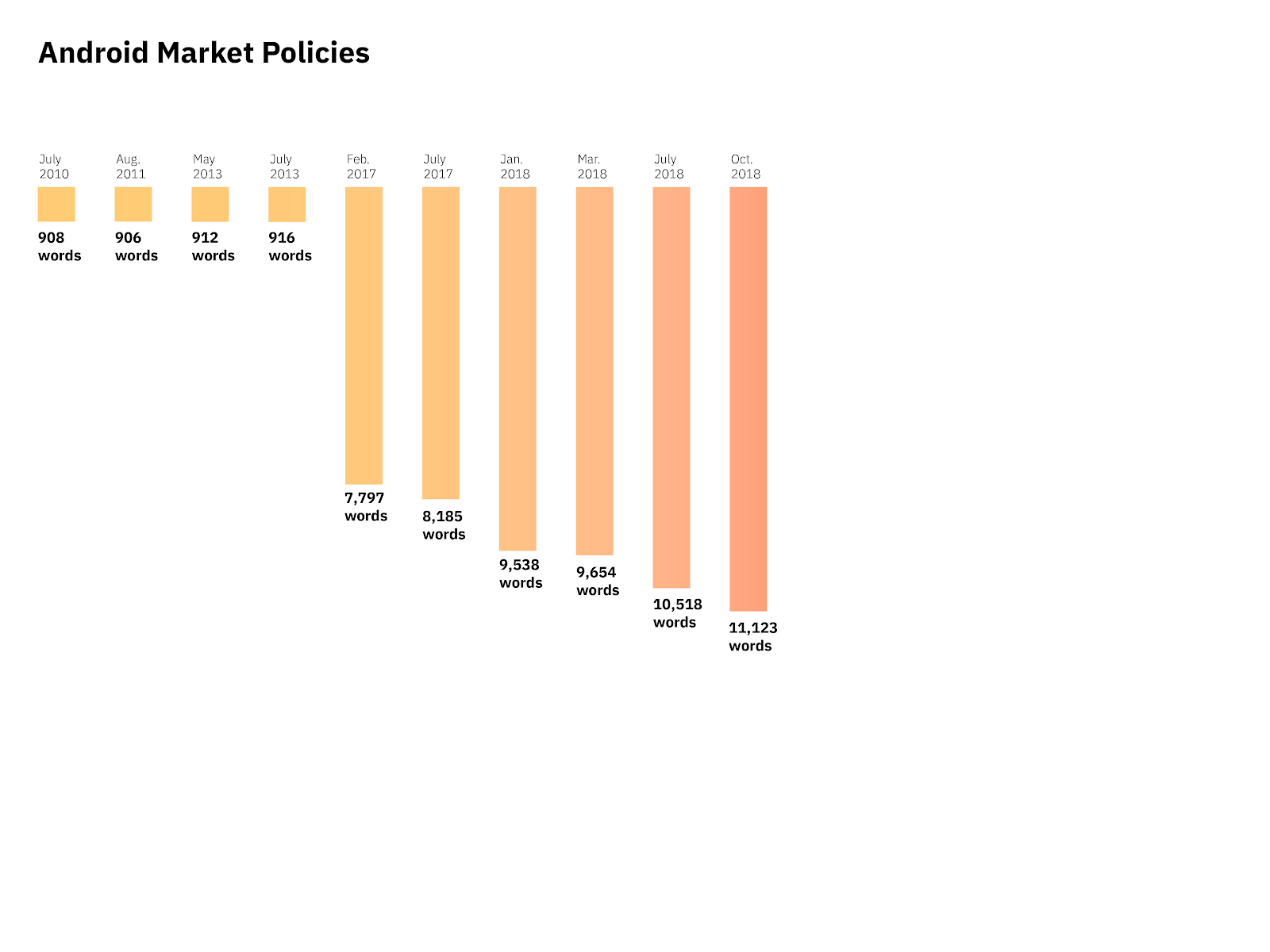 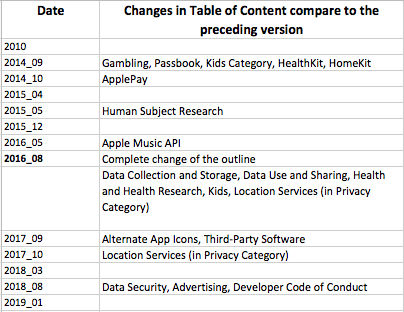 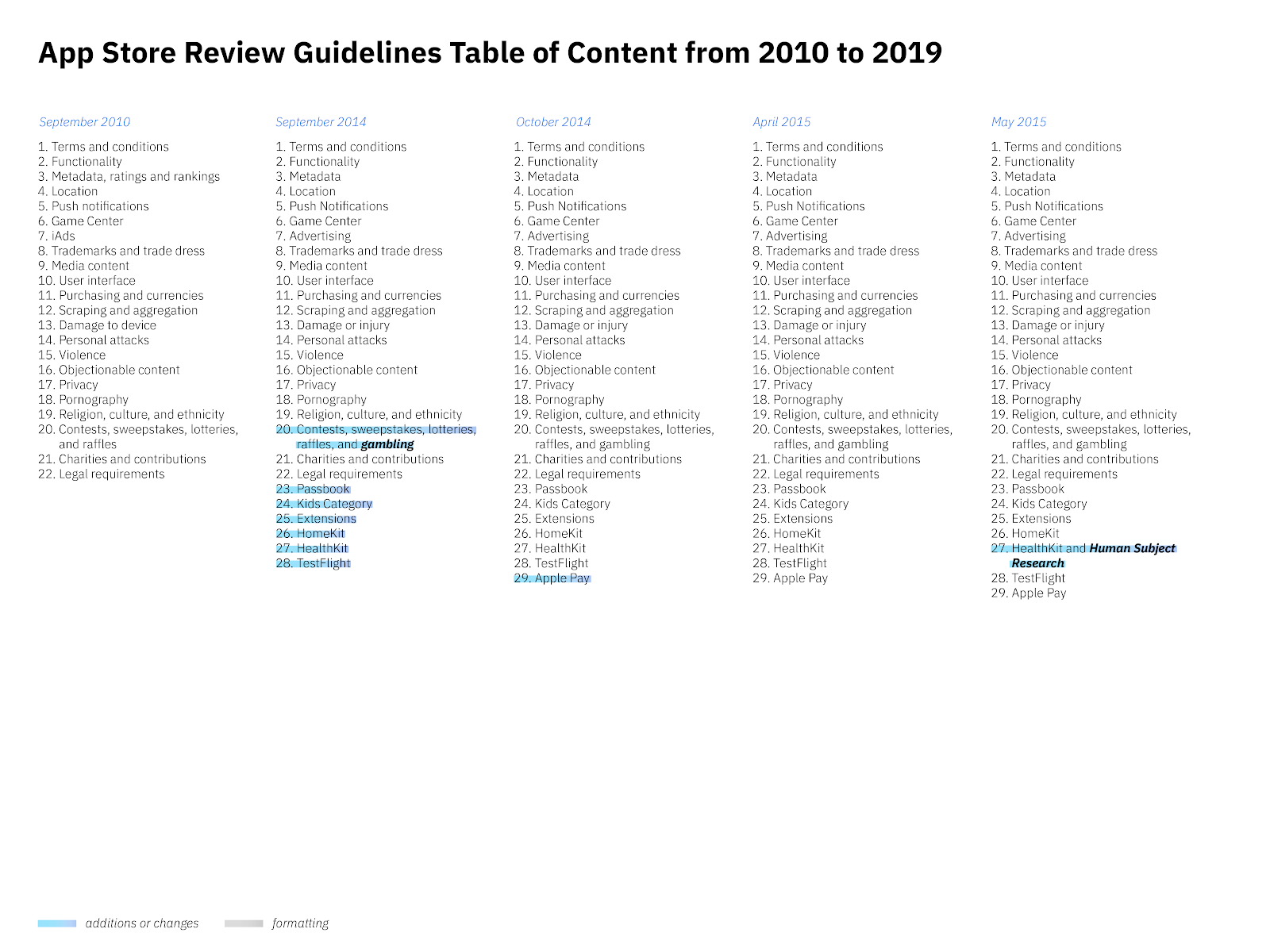 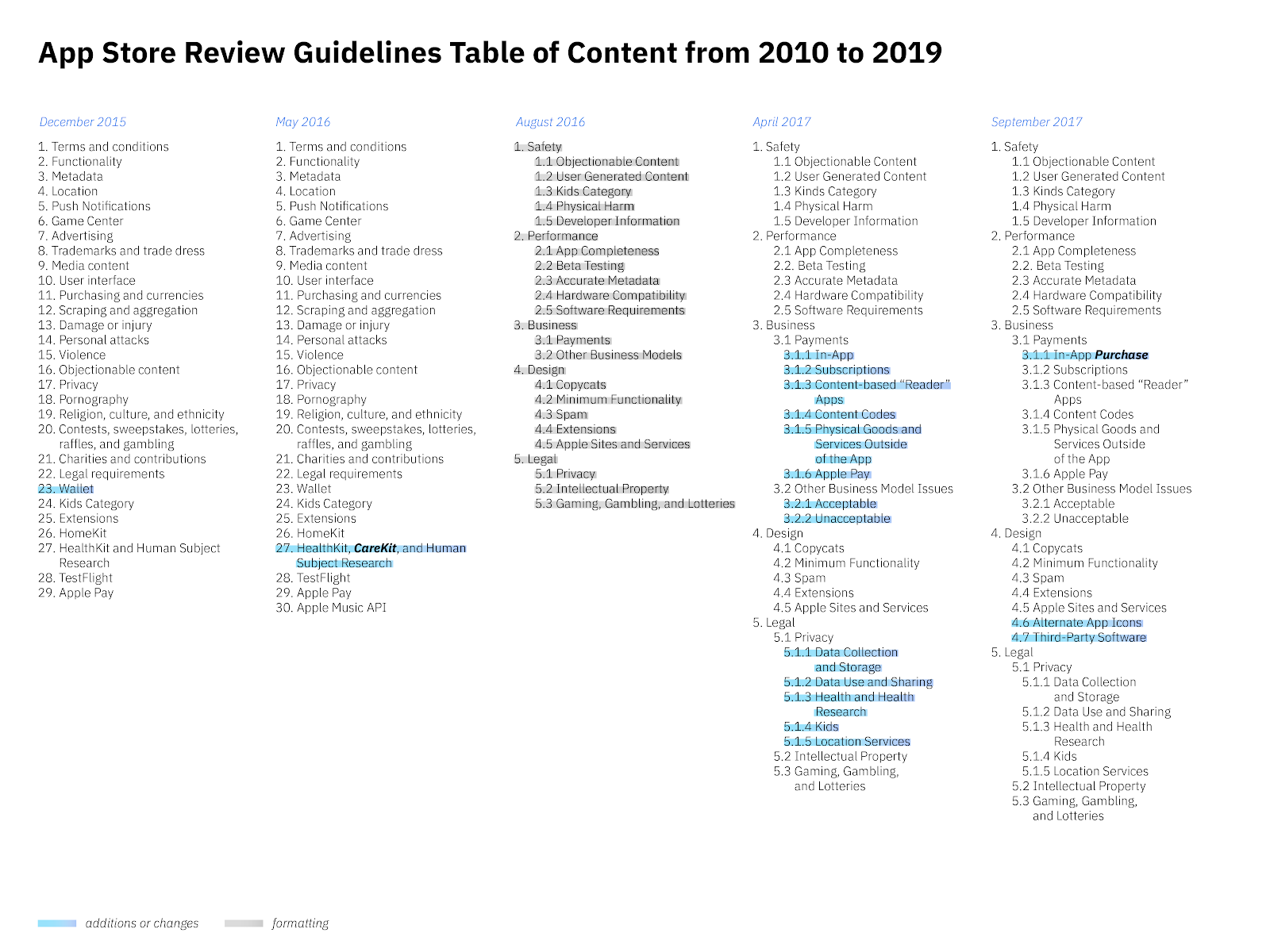 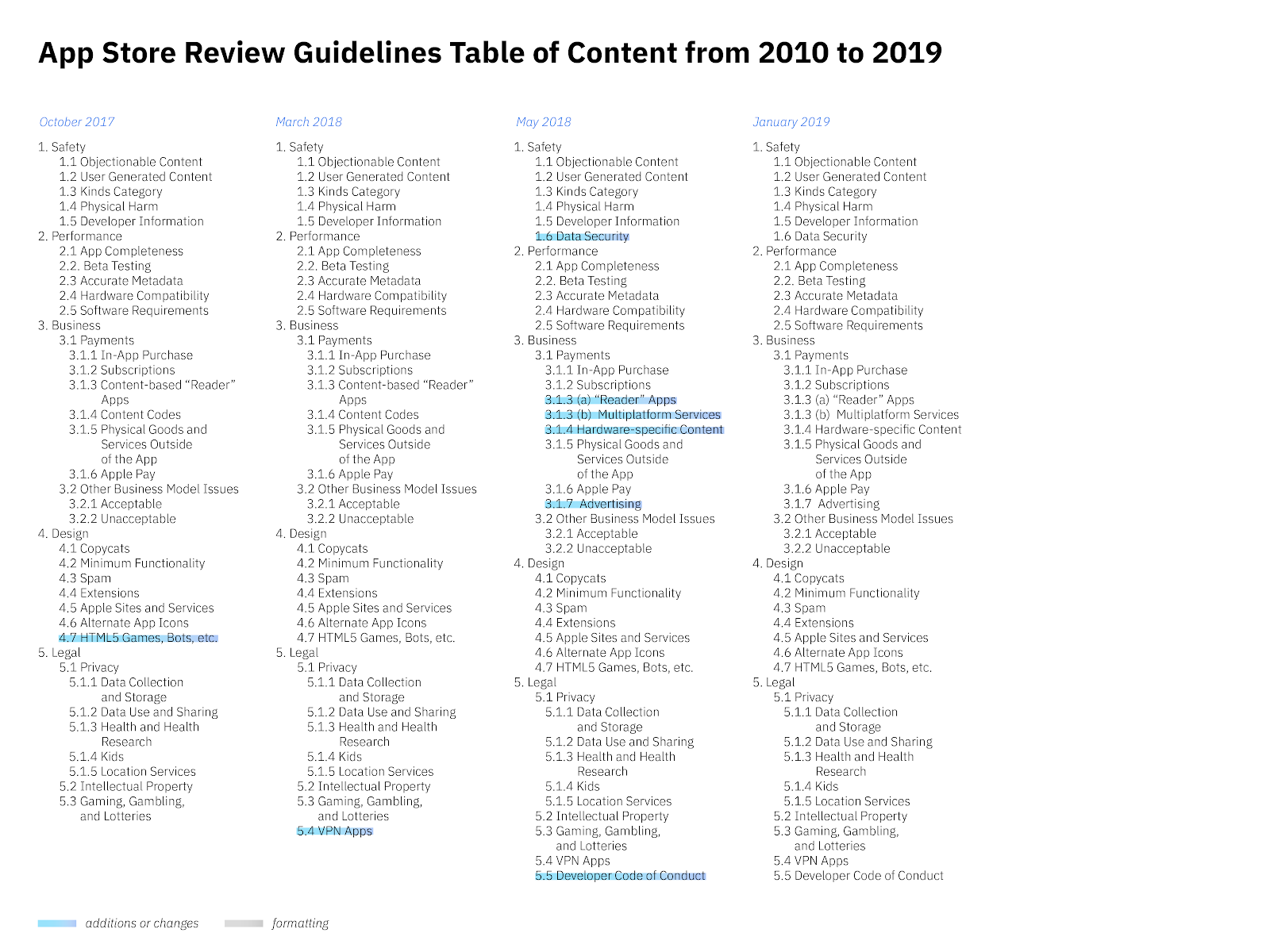 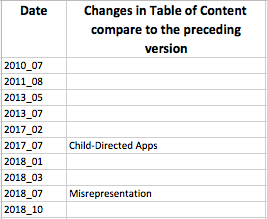 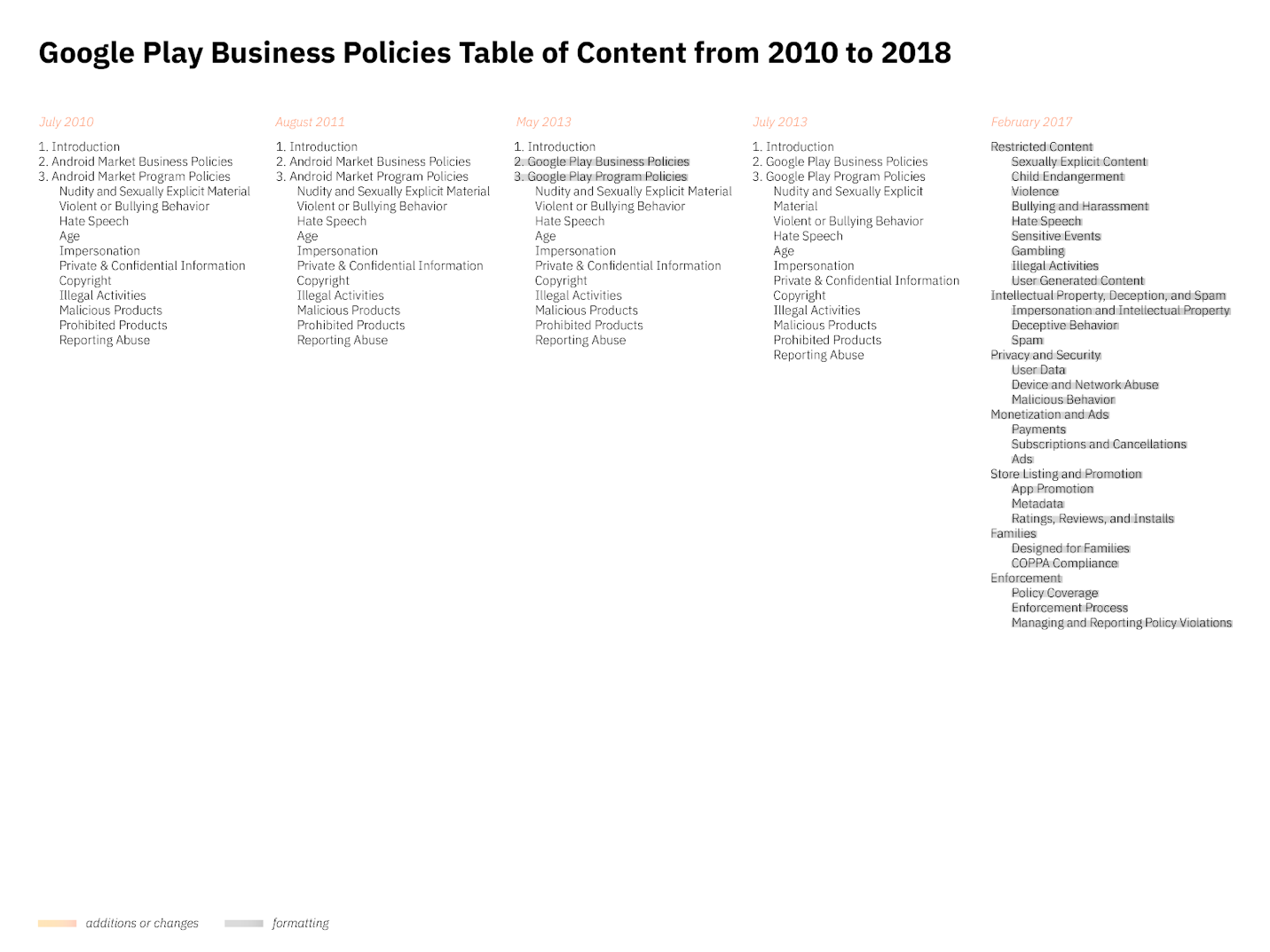 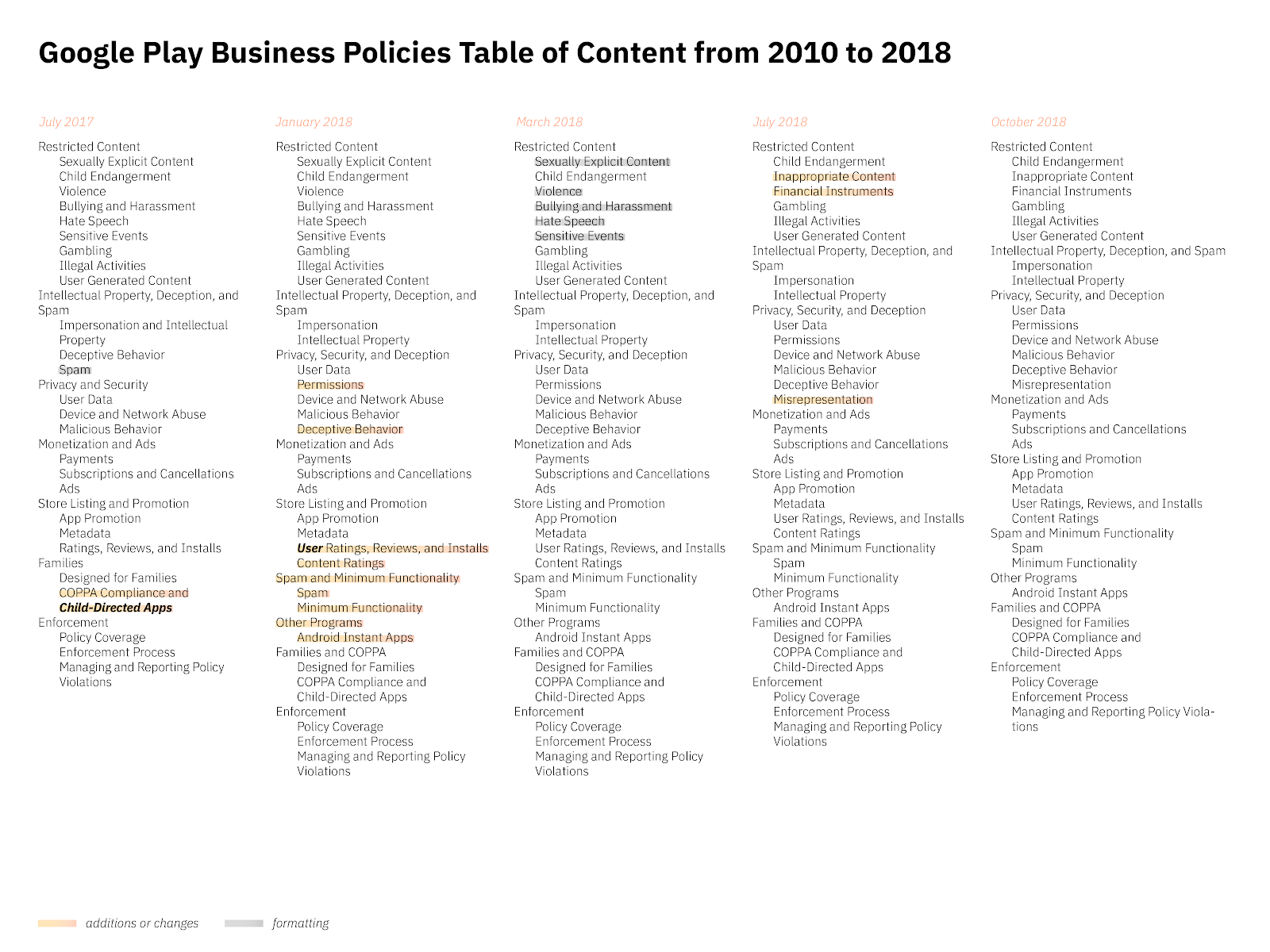 10.9. Apple: Overview of changes in the sections 'Introduction' and 'Closure' (which is referred to as 'Living Document or later as 'After You Submit') 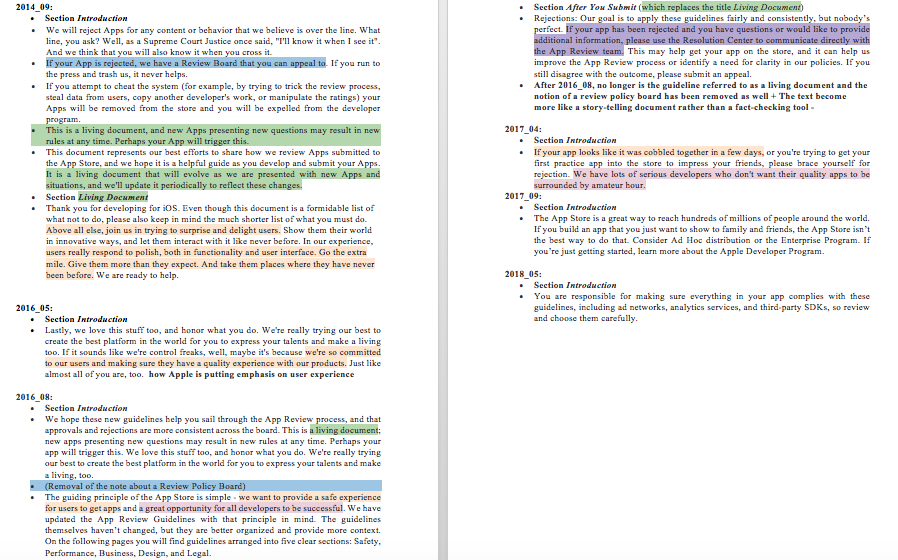 10.10. Screenshots of changes in the sections 'Introduction' and 'Conclusion' (comparing May and August 2016)