Mapping Transnational Motherhood: The Case of Romanian “Children Left Behind”

The issue we want to map revolves around an online campaign in Italy: “Te iubeste mama! / Mamma ti vuole bene!” (trans. Mum Loves you!) This is the most important campaign among Italian NGOs addressing the phenomenon of the so-called “children left behind” and is promoted by the Italian-Romanian women’s organization A.D.R.I. (Associazione Donne Romene in Italia). What’s the wider context? We want to investigate this issue online in order to understand more about how its has spread via different media forms, across different national mediascapes.

Transnational Motherhood: Romania and Italy Steps in Netvizz: We did a search in Netvizz Search. The query was the name of the campaign in Romanian: Te iubeste mama! Three page IDs: 1. 857566424339033 - Mama te iubeste – Personal blog 2. 124511094318810 - Proiectul "Te iubeste mama!" - websites 3. 1443491459309349 - Mama Mea Puterea Meah Te Iubește Fata Tah – Local Business So we will focus the analysis only on page number 2, the page of the campaign that is made by the Italian organization ADRI, but that has its description/content in Romanian: Proiectul "Te iubeste mama!" Steps in Gephi: What we can see: 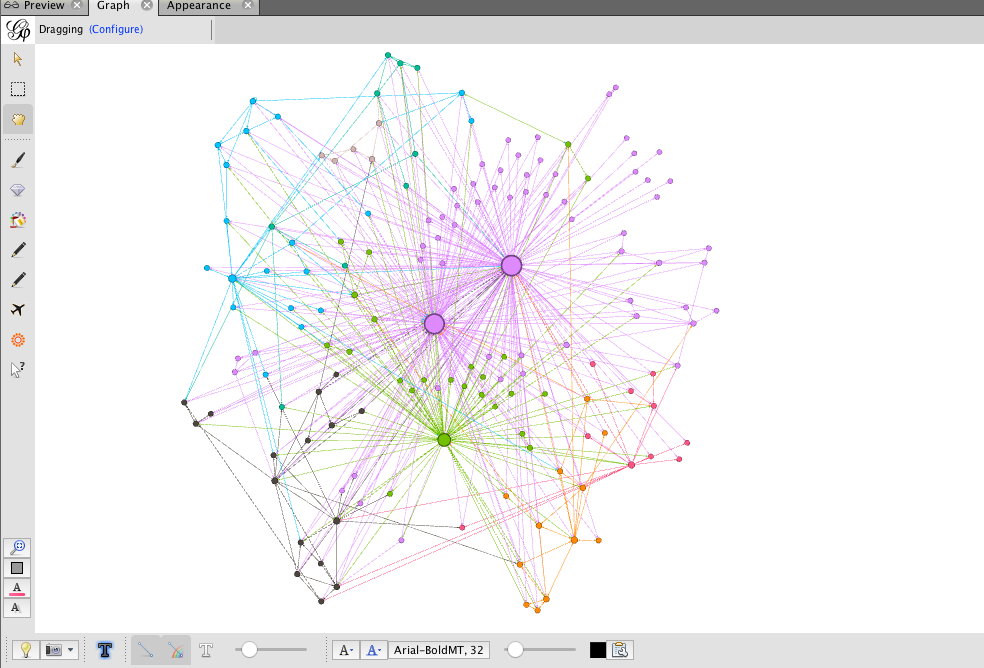 We didn’t see any see any visible clusters appearing in the above. So starting from scratch again, we added Modularity Class algorithm to come up with “communities”. 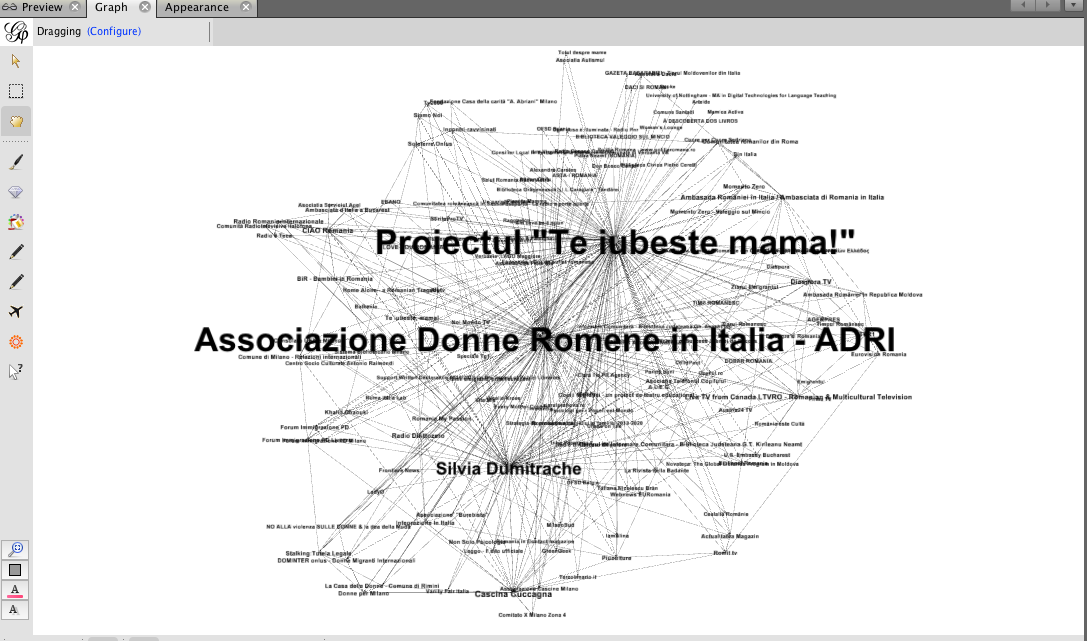 Making a list for Issue Crawler: Donya and Claudia did two different things from here: Donya: Under Output at the top of the page, chose txt format. Copy pasted the text from the page into Text Wrangler. Saved As tsv file. Opened in Excel. Deleted all the columns except for the list of URLs. Claudia: Under Output at the top of page, chose to open as CSV file. Then opened the file in Google Sheets in Google Drive In order to clean the data, copied the list of URLs only. Pasted into a new Google Sheet file. In Issue Crawler: Then we did the same thing as each other again: Then we made an Issue Crawler account each, and copy pasted our different URL lists into Issue Crawler With 1 iteration of method, 3 deep, co-link, privilege starting points. One list for Italy, one list for Romania.

Claudia: tried to see if the Youtube Channel of the Association ADRI can show and confirm connections with the kind of organisations that the study on Facebook shows. 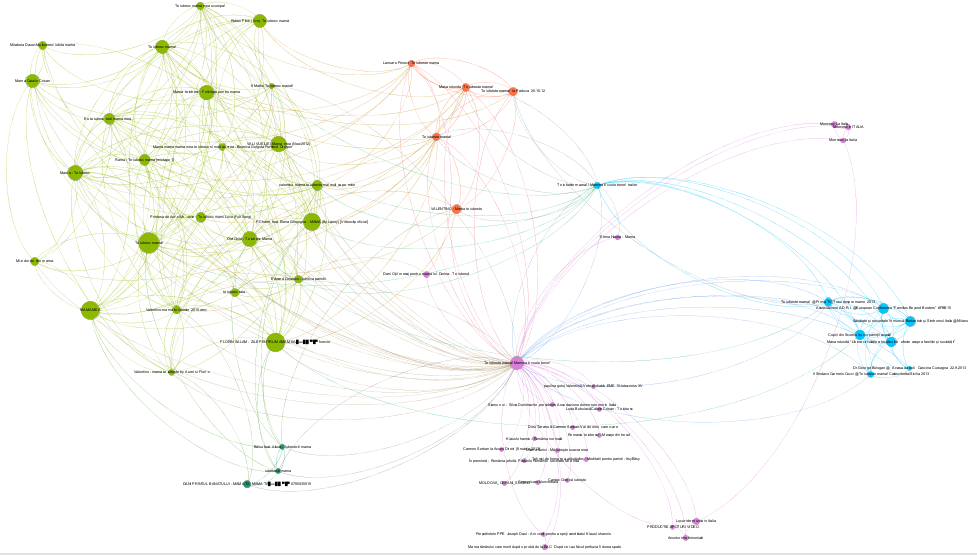 Though, the different labels say nothing about the character of the channels associated to the published videos, since they only report the titles. In order to understand the different character of the channels associated to the nodes/videos, I exported the .gdf file of video networks into a .csv, then opening it on Google sheet to clean it up, adding a further column which describes the nationality of each account associated to the videos. In the meanwhile, we returned on Gephi Facebook visualisation. We decided to delete the nodes “Silvia Dumitrache” and “A.D.R.I - Associazione Donne Romene in Italia”. The reason was that the presence of those two nodes, so strongly interrelated with the project’s one (the first is the page of the main funder of the project and the second is the one of the association that promoted the project), was causing the inclusion of nodes - and so clusters - not minimally related to last. Finally, we decided to delete also the main node “Te iubeste mama!”, in order to understand the degree of importance of the pages linked to it and re-formulate the clusters. Manual coding countrys’ associations and colour in the graph.

Facebook Page Like Network for campaign page: The most striking overall finding was that there was no Italian national cluster in the visualization. Rather, the local dimension of the issue network in Italy was clearly dominant. The local Italian cluster included a variety of different organizations based in specific cities, in particular Milan. These included local sections of the Italian Democratic Party, women’s organizations, and other non-governmental associations. Aside from the locally-oriented Italian clusters, there was a broad section of the network that related to Romanian diaspora issues more broadly. These included pages about diaspora/international Romanian TV channels, on transnational Romanian motherhood, and also a sub-cluster of pages of libraries based in Romania (who worked together with the project on events that placed mothers and children in contact with each other via Skype). In addition, we found a marginal but recurrent cross-diaspora connection to Moldova (when also taking into consideration the URLs from Google Scrape) in the form of a joint Moldovan-Romanian diaspora organization based in Italy appearing in the network, and hyperlink (in the URL list - next section) to an Italian language article mentioning a case of a Moldovan woman migrating to Italy, leaving behind her child.